Poof, There It Is Theory 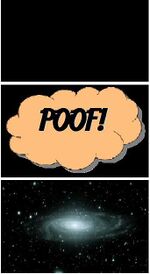 Poof, there it is.

“I know science better than anyone- and let me tell you, this Poof, There It Is Theory holds water.”

~ Sir Issac Newton on Poof, There It Is Theory

“Well, it certainly seems to make sense... but I'm just not sure.”

~ Werner Heisenberg on Poof, There It Is Theory

The Poof, There It Is Theory is one of the most popular theories used to explain the creation of the universe. The theory is quite complex but it can be simplified to something like this:

Science fiction writers argue contentiously about the origin and structure of the Universe. Many authors posit other "dimensions" which exist parallel to work-a-day reality, claiming that these unseen forces somehow kick-started the Universe. However, quantum physicists studying subatomic particles (entities smaller than regular particles) conclude that the Universe must have been created. As Dr. Waingirth of New Sudsbury said, "With all our accelerators and colliders, we cannot make a single quark[1] unless we call upon God Himself."

This finding comes nearly 2,500 years after the Greek philosopher Idiocrates figured out that something must have gotten the ball rolling. Indeed, the Greek Word for this universal "prime mover" is premium mobile, or Premium Mobil Gasoline. 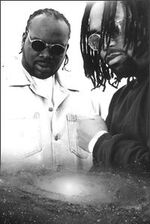 Poof, There It Is!

Now we can at last fill in the details of universal creation, that great tale started by Idiocrates.

One day on the sixth plane of existence a fire broke out at a Mobil gas station standing on the corner of Crenshaw and Slauson. This intersection was made famous by Dr. Dre who, not coincidentally , claims to have a God-like presence in the world of Gangsta Rap. "I started this gangsta shit," says Dre, "and this the mothafuckin' thanks I get?"

The violent Primum Mobile explosion blasted Coelispex off on a diatribe about Dr. Dre and Gangsta Rap, but then again, the explosion was the cause of everything in our universe! How could the writer not get blasted?

The author apologizes for any confusion. And no, Poof Diddy has nothing to do with any of this.

Everything exists. Everything is. How did it get to be so? Poof: There It Is.

This explanation might seem very simple to some people. Well, it is simple! But others, troublemakers and doubting Thomases, ask "What causes a Poof?" and "What are a Poof's inner workings?"

However, there is nothing more to the Poof than the Poof itself. As the poet put it, "A poof is a poof is a poof." In a word, a Poof is. In two words, it is self-sufficient.

And yet...a Poof is not a spontaneous event. Far from it. We must understand a Poof as a meticulously-planned random event. If you understand that concept, then you have come one step closer to knowing the Poof. If not, try your luck here.

Why Is The Theory Called Poof, There It Is? Wouldn't Big Bang Sound Better?

No, it wouldn't. And besides, "Big Bang Theory" was already taken. The fallacious BB theory states that everyone wants to go out with a bang (or in layman's terms, die whilst getting laid.) Poof, There It Is Theory allows far more complexity than ordinary Big Bang Theory since it is the framework that holds the universe together, while the Big Bang just concerns sex. Poof, There It Is constitutes the cement — the rock-solid concrete — of the cosmos. Some people call Poof, There It Is "the new causation."

However, there is no way to apply the scientific method to Poof, There It Is. Academics dispute the validity of the premise, bickering, shouting, spilling tea down their shirtfronts. This works out well for Poof, There It Is: its universal framework explains the pedagogical academics and their sniveling as well.

Consequences of Poof, There It Is

Magictology is the only earthly religion that recognizes the validity of Poof, There It Is, and professional magictologists are sometimes called "poofters" for this very reason. In the realm of Poof There It Is, imagination rules, because everything bursts into existence through the mental faculties of the original Poofter. 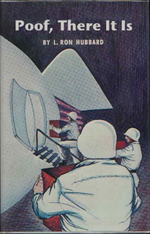 Several books have been released on the topic of Poof, There It Is, most notably this fictionalization of the matter by L. Ron Hubbard.

How Did The First Poofter Poof?

We know nothing about the first Poof, except that it must have happened. If it hadn't happened, we would have never been Poofed, wouldn't be here, and therefore couldn't ask the question "How Did The First Poofer Poof?" Our existence proves that there must have been a first Poof. Most Poofters accept this "primum mobile" aspect of the theory, since it's true. Also, the competing "Blammo the Clown Theory" is just plain stupid, since balloon animals are so 1992.

Who Is The First Poof(t)er?

Since you and I exist as Poofs of the first Poofter, we can never really know much about him. (Of course, he is a man, because girls aren't that good at poofing, so assuming the first Poofter was a woman is ridiculous.)

The First Poofter had a lot of heavy thoughts, and gravity was the result. As soon as gravity poofed a knee-jerk quantum reflex forced electromagnetism to poof into existence. Subsequently matter and anti-matter poofed into existence to establish a connection between gravity and electromagnetism. Matter is the basic building blocks of the universe. Antimatter poofed into existence because it sounded cool, and since it sounds cool, it is much more powerful in terms of mass-energy. (Formally speaking, E=mc®, or MCE=Dusseldorf2 where MCE indicates M.C. Escher.)

But despite the difficult math-like stuff, science fiction writers find antimatter fascinating. The first Poofter just knew they would. Accoring to the SF writers one day everything will run on antimatter and gasoline will be outlawed, ensuring there isn't a Premium Mobile II.

Seeing an Poof in the process of Poofing is a miraculous sight. Unfortunately, Poofs are quite rare. If you want to see one, look for these two things:

If you see these two phenomena then you've seen an authentic Poof. Well, either that or a cheap parlor trick by some two-bit magician.

If you can't Poof already, you will never learn. Poofing is genetically encoded in the Sons of Abraham, Oprah, and Sir Isaac Newton (how did you think vector calculus was invented? Nobody could figure that shit out; it was Poofed, of course).

We have compiled a short list of things poofed into the Universe. A mighty Poof created the Universe itself, of course, so subsequent Poofs are second derivatives which exist only because of the First Poof.

[1] This restriction applies to quarks in isolation, of course, hopelessly uncontaminated by antiquarks.