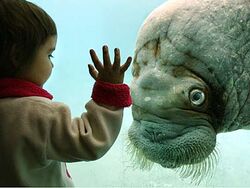 For those without comedic tastes, the so-called experts at Wikipedia think they have an article about David Blaine.

David Arthur "Killer Kane" Blaine is a magician infamous for his "Turn The Twenty Dollars Into A Monopoly Game With Missing Pieces" trick. He is seriously a great magician. He has more tricks up his sleeve in one night than a hooker does in her entire career.

He also has a ventriloquist's dummy named Hugo, that can sit endlessly for hours. Many people have been amazed by this spectacular feat of endurance.

Many of his "magic" tricks are not really magical at all. For example, Blaine has been seen levitating; however, scientists have revealed that widespread dislike of Blaine causes Earth to emit temporary anti-gravitational fields around him, effectively repelling him away from the planet.

David Blaine has announced that when he dies, he plans to do his own autopsy.

Blaine has recently been sentenced to spend 7 days in a 'Human Fishbowl' in New York city. The punishment reflects the state's oldest laws concerning Witches. If Blaine survives the week long dunking then he will be declared a witch and burned at the stake. If his lungs succumb to the ordeal and he drowns then he will be declared innocent and his soul will be allowed to shine on, shiny-white.

He has often been voted "Best Person Since Winston Churchill" by British people.

I would just like to make a point, note David Blaine started by spending 44 days in the air, then tried to hold his breath underwater for a long time... It is my hope that he is working his way through the classical elements and next we will see him spend a prolonged period of time on fire. David Copperfield tried this with his "tornado of fire" going from original recipe to extra crispy, needless to say David Blaine is to chicken to actually try it. (pun intended.)

While Blaine's "magical" abilities have been researched and discussed amongst even the most intelligent scholars, there has been no real evidence to prove whether or not he possesses true other-worldly abilities. In 1999, a young woman came forward and made an official statement that Blaine, while intoxicated with the young lady in a motel room, revealed to her that his "magic" was, well, bunk.

"Bunk as hell," exclaimed Blaine to the drunken woman. When she attempted to ask what "bunk" meant, Blaine threw his arms into the air declaring, "With your question, I shall summon forth the great demon, Bjourllocke, to demonstrate my true power!" Blaine's outburst caused him to squeeze a big fat dump out of his ass at which Blaine giggled at, and then passed out. To this day, no one knows exactly whom this dump made the official statement to. The mystery of David Blaine lives on.