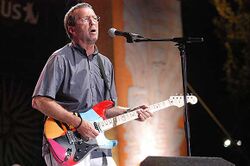 "Come Sail Away You Lads"

“If I saw you in heaven... I would back away slowly and try not to say anything dumb.”

“He took my wife, but I had much better hair.”

Erich von Clapton was not really born, but just kind of was. By age 3 he had become court composer to King Franz Hapsberg of Austria, and impressed the king deeply by playing the solo from Layla on harpsichord and sackbutt simultaneously. The king was entranced and presented his young prodigy with 30 concubines and the deeds to a Dresden flour mill. Von Clapton responded with an a-capella drum solo on a theme by Handel, and the king immediately presented the boy-genius with 4 of his daughters and his 2nd-favourite son Prince Leopold Hapsberg.

After leaving Eton, Von Clapton moved into a trendy 'loft' apartment in Windsor Castle, with his concubines and the Hapsberg child-brides. (By this time young Prince Leopold had left the entourage to form the Alternative Symphonietta Apocalypse Band and was touring Burma). 'Mad' King George III was well impressed with Clapton's guitar virtuosity and ability to 'toot' a wheelbarrow of snuff every day and soon promoted him to Archbishop of Power Chords. Clapton countered with the memorable 461 Ocean Boulevard and began a World Tour, supported by Ted Nugent and Carla Bruni-Bach.

Clapton and his entourage travelled in a convoy of glass carriages pulled by white horses, with teams of naked dwarf-prostitutes scattering pink rose petals upon the crowds of admiring peasants. Around this time Clapton developed his trademark hand-wave, modelled on that of the British Royal Family, thus earning himself the title 'Slowhand'.

For those without comedic tastes, the so-called experts at Wikipedia have an article about Eric Clapton.

Following the tour, which broke all records for sheer debauchery and snuff-consumption, the victorious Clapton returned to London and was inducted into the Rock n'Roll House of Lords. Incredibly, he was still only 8 years-old! A few days before his 9th birthday- which was to be a Public Holiday and Official Day of Great Rejoicing, Erich began to write the first few bars of "Tears in Heaven" for his next album "Background Noise To Listen to While Driving Your Convertible to the Golf Course" — surely a nod to Clapton's middle-aged and well-to-do fan base. As the haunting melody floated from his window, Prime Minister Clement Attlee, who was listening eagerly in the courtyard below, dictated the following letter:

When Eric arrived in Downing Street he played the two opening bars from "Layla" and instantly unemployment in the United Kingdom dropped to zero percent, poverty completely disappeared, and Status Quo promised not to release any more albums.

Having solved all of Great Britain's problems, Eric popped into the office of the United Nations where he solved global warming, tempered capitalism, and actually managed to get Maria Carrie to shut up albeit for a short time.

When Eric completed the opera "Wonderful Tonight" aged 9 years 2 months he received a challenge from God, who was jealous of his incredible talent, to a guitar battle. Clapton accepted, assuming that the Lord of the Universe would be a suitable challenge. However, God cheated, and instead created Herman Li as an opponent, who could play one billion notes per second. However, because the guitar battle was a live one, rather than a studio recording, Li could instead only play five notes per minute, and when Clapton played his first note, Li wet his pants, and Eric was declared the winner.

After the dominant victory, Clapton received the following telegram from God: 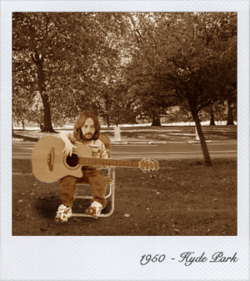 Despite feeling slightly embarrassed about the whole thing, Eric finally agreed to take up his seat as the single omnipotent being of the universe. Everyone enjoyed peace and tranquility for a short time whilst Eric gently played in the background. Black holes decided to stop sucking and supernova just could not be bothered with all the fuss. Unfortunately order came to an end and the usual chaos returned when the 1990's finished and Eric was forced to spend most of his time trying to stop Prince from making another comeback career.

On November 19,2015 Clapton would sell Heaven to Robot Walt Disney for a unknown amount of money so he could focus on his music career and because the people in Heaven are f*cking annoying