Some of the regular crowd enjoying a light appetizer.

Denny's is an American based restaurant chain that specializes in selling huge portions of low-nutrient/high-fat foods. A prominent feature of each Denny’s is a spacious and state of the art vomitorium. Most restaurants are located near busy interstate highways and are open 24 hours a day, much to the dismay of the Food and Drug Administration. Additional attractions include the in-wall vacuum system, which children and perverts love to play with, and witnessing the comings and goings of the dredges of society.

The favorite dish at Denny’s is the Grandslam Breakfast, which consists of three whole chickens, a five-pound ham, twenty double-sized lard and flower balls (sometimes called biscuits),three dozen eggs. and all covered in head cheese. The whole meal is then covered in sawmill gravy and deep-fried in bacon fat. A long running tradition is to try to eat the whole thing without the usual two or three trips to the vomitorium, although only a handfull of truly dedicated truckers have ever succeeded in this task.

Things To Do At Denny's[edit]

Things Not To Do At Denny's[edit]

Denny's founder visits one of his many restaurants.

Denny's was opened in 1991 by founder and CEO Dennis Rodman. The idea for the restaurant came from his entourage who always seemed hungry for Rodman's mother's home cooking, and you could often hear then saying "hey, lets go to Denny's house to eat". After a while Dennis got sick of his free-loading friends and did what most money-grubbing meglomaniacs have done, found a way to profit from it.

The first Denny's location was opened up in Death Valley, California and was built out in the middle of the desert. Not surprisingly, this location failed to draw much business. A year later, in July of 1992, Rodman got the idea that if he were to put the restaurant near a busy street then business might follow. He surmised that California's highways were the busiest streets in the world and that maybe he should put one there. This second attempt, located off of I-405 in Encino, California would catapult the franchise into the mainstream.

By late 1995 there were over 20,000 Denny's operating around the world with plans to expand until there is a Denny's at every major highway intersection across the globe. You have been warned!

Once a year around Christmas a syrope chugging contest takes place. Usually the contestants are truckers,drunks,and underpaid illegal aliens who mostly hail from south of the border. Whoever wins the contest gets a free Super Slam with no pancakes. No one knows for sure why they don't serve the winner pancakes with their Super Slam but that seems to be some cheap way for them to save money. Below are a list of the following rules of the syrope chugging contest.

Nick Griffin used to visit Denny's a lot on his trips to America, however since they started serving black people he has since stopped coming, stating "who the fuck let the coons in?" 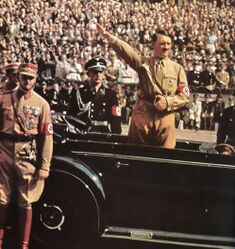 Nick Griffin visits a Denny's in the 1980s.
Retrieved from "https://uncyclopedia.com/w/index.php?title=Denny%27s&oldid=6071149"
Categories: