Can you see YOUR Karma?

“My Karma just ran over your Dogma.”

“Ex: my foot comes around, and goes around”

Karma. The simple explanation of karma can differ slightly, and sometimes vastly, between humans, cultures, animal kingdoms, watery kingdoms, the world of ants (and other English-speaking insects), and let's not forget other solar systems, but the general concept is basically the same, unless it's different, in which case it's completely something else, although remains to this day, strangely familiar.

Apparently God plays some kind of role in this, like a giant vending machine, dishing out either tropical fruit or crap depending on what you offer up as sacrifices. In the olden days, people threw burnt goats and bulls in the air, without the aid of a rocket, in the futile hope they would somehow reach God and please Him. Much of this sacrifice tradition has been watered down and lost through the centuries, specially with Animal Rights and Greenpeace and other such regulators throwing spanners in the works. Another common view is that God seriously is a bit of a nosey-parker, turning up in all kinds of places, totally attention seeking. Expecting worship in return for tropical fruits is hardly worth it. You can get them practically free in the frozen section of any leading supermarket.

Through the law of karma, that is, if karma is a law, which is also debated, concludes that it should have the same view point unless it's different (see above), the effects of all the stuff you do is made up of the past, present, and future experiences. So, obviously the stuff you do is your fault, so the rubbish verses fabtastic Christmas presents it brings to you/him/her/it and others is all depending on if you write to your relations, call your mum, and provide help and support at the drop of a hat on any respectable and regular times through the year, to whom-so-ever demands it. It's all about pointing the finger of blame, so that any crap going on in the universe is probably your own fault, so stop sulking. But don't forget to feel guilty at all times. 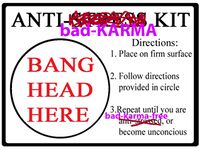 Bad-Karma-Kits available for serious cases. One size, remarkably, fits all.

You are a living recycle bin (a.k.a: re-in-carn-ati-on), karma can get you now and all past and future lives too. So, it's really NOT just for Christmas, karma really needs you all-year-round, feeding off your very soul, forever, in your past, now and in the future, no matter how many times you melt into a blob and reform as something else. Examples of something else can be provided, please see here