For those without comedic tastes, the so-called experts at Wikipedia have an article about The Misunderstood.

This particular misunderstanding began when fate decided to try her hand at unpopular music. She created five unwitting suckers along with DJ John Peel. Then she brought them all together and the boys conspired as rebels with a cause of being Yardbirds-wannabes, while John became their mentor.

Although just a rag tag band from California's Hayseed-meets-Hollywood Inland Empire, by 1966 Peel had teleported them to another reality, far far away, in "fab" London, where they became Psychedelic Music icons, like, NOT! [1][2]. In London town the band were enticed with promises of bread and water into signing a pact with the first company to giva-a-shit: Fontana Records.

But their obscurity in England came at a touchy time, and the US Embassy in London couldn't care less when the group told the media the war in Vietnam sucks. So for totally unrelated reasons, such as the will to protect their lucrative military-industrial contracts, the government staged the Gulf of Tonkin false-flag distraction, and simultaneously sent the band members death or dishonor orders from the US Army. Poof! End of story? Kinda.

The singer managed to escape to sanctimonious India for 12 years of destitute exile. Meanwhile the other members were deemed utterly worthless for military service due to their pre-traumatic lethargy syndrome. And so it was that the Misunderstood never came to pass. But don't take our word for it, just ask anybody![3]. What could be more suitable as an Uncyclopedia article than an unknown band who never were?

Greatest losers of the 60s

The band was so noisy the music-media and British groupies remain forgetful even now. In fact, myth has it that The Who's Pete Townshend never even considered suggesting that The Misunderstood tone down and chill out a bit. All in all the British music scene had a mixed reaction to the group: the media loved them but the bands hated them, for example:

“The Misunderstood were a band of immense talent!”

Before being forcefully disbanded the group managed to pop some fuses and record a whopping seven Psychedelic Music songs in the UK. Although the band waxed all of seven songs in London, only all of these still exist. They are known as “The Seven Dwarfs” because of their being "dwarfed" by most Psychedelic Music: 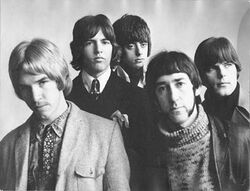 Thus it has come to pass that the quest for a heavenly retreat begins with the ability to distinguish psych music from trite music. Because all those who don’t dig The Misunderstood's tunes now go to a cold, hard land where White Christmas, as sung by Pat Boone, is played ad infinitum.