Our Gang of Four 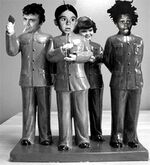 Our Gang of Four members Robert Blake, Alfalfa and Buckewheat (front) and the evil Madame Darla, wife of Chairman Spanky, applaud themselves for their cultural achievements and bloodless murders during their reign of terror

Our Gang of Four was comprised of four members of the Party of the Working Equal Chinese who rose to prominence during the reign of Spanky Zedong, Chairman of the Party. Comprised of Alfalfa, Buckwheat, Mickey (aka Robert Blake) and Chairman Spanky’s wife Darla Hood, Our Gang of Four waged a cultural war against influence of the West Hollywood elite by imposing strict rules on their community of Little Rascals until the death of Chairman Spanky in 1976, after which they were tried for crimes against the State.

Scholars agree that the mastermind of the Gang was Madam Darla, wife of Chairman Spanky (what kind of last name is "Spanky" anyway...I mean seriously...?). Cold and cunning, Madame Darla embraced her role as Chairman Spanky's most reverred wife and counsellor.

Madam Darla passed over fellow Little Rascal and bully Butch to serve with her, instead choosing Mickey (Blake) as the group’s enforcer. When Butch complained about this slight, he soon disappeared. Before a body could be found, Madam Darla ruled that his death was a suicide. His body was later found floating in the Los Angeles River. 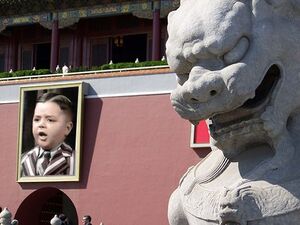 During the reign of terror the Gang imposed strict artistic limits on their Little Rascals. Almost immediately after seizing power, Madam Darla squashed all impromptu musical reviews held in barns, basements and school auditoriums. Madam Darla announced that all future productions would honor the cultural advancements made under the benevolent leadership of Chairman Spanky and would eschew the trappings of Busby Berkley musicals.

To accomplish this, Madame Darla placed cultural oversight into the able hands of her longtime admirer Alfalfa, who promptly issued a decree that all Little Rascals would attend his performances of The Barber of Seville and like it. Or they would face the consequences.

Madame Darla next placed Mickey (Blake) in charge of all security aspects of the society. She also issued credentials to Mickey which allowed him to shoot and kill Rascals, even if it meant saving their lives.

Mickey soon earned the reputation of take no shit; take no prisoners.

However enforcement of Madame Darla’s directives resulted in the disappearance of Weezer and Froggy. Also missing and thought to be sent to work camps are Miss Crabtree, Grandma and Stymie. Their bodies have never been recovered. Waldo - who was the leader of the brainiacs - was never seen again.

Following the death of Chairman Spanky, the interim Party leadership (Mary Ann, Tubby, and the Baby, who could only say Remarkable), sought to quell the Rascals discontent. Lead by party member Porky, the Our Gang of Four was placed under house arrest.

In order to bring charges against Madame Darla, the Party placed great pressure upon Buckwheat to confess that Madame Darla was behind the cultural coup. Unable to cope with the pressure, Buckwheat fingered Madame Darla, Mickey, Alfalfa, and himself as the key ring leaders of the Little Rascal Cultural Revolution.

At their trial, standing defiantly against their accusers, the Our Gang of Four were found guilty of crimes against the state. Madame Darla and Alfalfa were sentenced to live out the remainder of their lives in black and white reruns. Buckwheat was later assassinated following an appearance on Saturday Night Live. Mickey was later found not guilty of murdering Bonnie Lee Bakley mother of his child and supposed wife in California.