Or perhaps you meant either the Mexican city or state.

“It's sort of comical how dogs have gone from being the mighty cousin of the wolf to something Paris Hilton can put in her handbag.”

“The only thing worse than being talked about is an uppity chihuahua.”

The common Chihuahua is an annoying-as-hell, yip-yap, midget-type animal that is often incorrerectly referred to a breed of dog when its really a type of giant rat, typically found in Paris Hilton's handbag and in North America as a housepet, and leave acidic dog logs on the floor. The most well-known species of chihuahua is the North American Common Chihuahua (Canus pequenus), but numerous closely-related species have been discovered and domesticated, including the Fire Chihuahua (Canus infernus), the Portugese Water Chihuahua (Portogueso aquaticus), the North Italian Cave Chihuahua (Canus reclusivus), and the Appalachian Scratcher Rat (Mountainosae scratcherus).

Little is conclusively known of the origin of the chihuahua. However we do know that they lived next to the Fountain of Youth and a giant baked potato (seen below to the right of the dogs) that gave out radiation causing Buttock cancer. This is why they went to rape dogs with non-deformed buttocks in envy. They were first discovered in the chihuahua reigon of Mexico, raping some other dog (seen below), by Lewis and Clarke in the Shrieking Forest of Arkansas, and one was captured and brought back as a pet for President Herbert Hoover, with tragic. . . Err, forget that last bit. Later expeditions turned up more species, all of which were promptly and cruelly domesticated. Contemporary explorations across the world turned up other species.

Recent historical findings posit the discovery of the chihuahua much earlier. In an excerpt from the travel log of Christopher Columbus, in an entry dated August 17, 1492, he writes "Explored the main continent today. Numerous small, yipping rodents encountered. Have advised what's left of my crewmen to shoot on site. The silly barbaric indians seem to worship them, however. Oh well, sucks for them. Sodomized a comely squaw at lunch. Once you go brown, you never turn it down!"

Ancient Mesopotamian texts also allude to a mythical beast, referred to as the Hound of the Gods, or more commonly called today, the Djinn Chihuahua. This mythical dog would have stood at six feet tall, breathed lava, and would grant you three wishes if you could rub its stomach just right. No paleontological evidenced currently exists to support these claims, however.

Currently, the most widely accepted theory of the origin of a chihuahua is that it is a crossbreed descended from a genetic fluke, involving the mating of a male California Sea Lion and a female Great Dane. As this did not happen in captivity, no one is quite sure how this came to pass.

Many cruel forms of domestication were used. Shown here is a combination of the 'humiliating haircut' and '"I will hold you up while people gawk at you!"' methods of domestication. This specimen ultimately lost its will to live.

As previously alluded to, domestication of the chihuahua formally began in earnest in 1860. Success was mixed. Some breeds, such as the North American Common Chihuahua, responded well to domestication and became suitable for play with children in less than two years, except for that one pesky little thing. . . The once numerous Royal Chihuahua died out within 5 years due to refusal to mate in captivity. Some species, such as the Polynesian Horned Chihuahua (Canus nonamiablus) or Dante's Crazy Motherfucker Chihuahua (Canus holyshitae), have not yet been successfully tamed, despite near-constant attempts.

The chihuahua is an unusually playful dog that gets along well with children and babies. They are often smiling, they are easy to train, and very rarely will they drink out of the toilet, as most of them can't even reach the bowl. They shed like mad so expect to live, eat, sleep and relax in huge tufts of little white hairs everywhere. Numerous pet owners who have cared for numerous species of dogs praise the chihuahua for its positive attributes, and recommend the chihuahua to novice dog handlers.

All of chihuahuas live quite well on tacos and small baby childrens. Tacos and baby sacrifices are the only food chihuahuas can eat. If you feed them anything else, they shall MELTS...

The hidden danger of chihuahuas[edit] 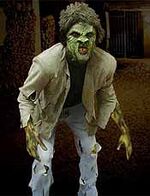 Somebody is totally fucked now.

One thing all people must be advised about is that they should never, under any circumstances, feed their chihuahua between the hours of midnight and 7 AM, lest their sweet, cute little companion turn into the chihuahua's second form, the carnivorous Zombie Chihuahua (Canus necrosis).

Effects of feeding a chihuahua between these hours are dangerous, spooky, and completely irreversible. As many pet owners, from Columbus onward, have discovered, within their pet lurks the soulless essence of a mindless killer. If a chihuahua is fed between these hours, it will become listless and eventually lose all basic signs of life within a five minute period. Then, its skin will bubble over with rancid lesions. These will continue spreading into a large, putrid husk, typically between six to eight feet tall. Within half an hour, the pod will break open and a new zombie will be loosed upon the world with only one desire: Brains. Once a chihuahua has arrived at this state, there is no other course of action to take except to kill it. This is a risky manuever, and is recommended only for trained professionals.When the pod opens, out comes a green, scaly, red-eyed, disgusting creature with two fingers and one thumb on each hand. They're really just Grues in disguise.

Further, due to the recent influx of illegal immigrants from the Mexican Town of Lower Chilupa, there has been an alarming increase in the number of Chihuahua infestations within the greater (well, greater than Mexico, anyway) United States. This has led to an unfortunate increase in the number of earthquakes, which are caused when enough Lower Chilupan Chihuahuas begin shivering in unison. (It is presently unknown whether Lower Chilupan Chihuahuas have been especially bred for this purpose by terrorists operating out of the Paris Hilton, or is simply a side effect of the Chihuahuas being fuck-all scared of EVERYTHING.)

Another little known fact is that Chihuahuas are poisonous. They contain a poison in their flesh, skin, and scary bulgy little eyeballs, called Chitrophan which is the most toxic poison on earth. When a human eats Chihuahua meat, they will begin having feelings of intense fear. Next, they will start drooling, hyperventilating, screaming, and urinating. The Chitrophan then attacks the brain full on, by dissolving it. This all happens over a grueling span of thirty days.

But other than those little downsides,they're great pets!