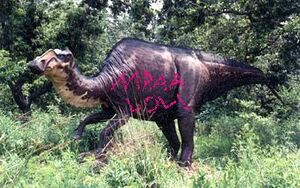 It seems that the Vandalasaurus has struck again.

“I've hidden a message in this page. Bet you can't find it!”

Steganography is the act of writing something on the side of a Stegosaurus. Nothing stays around like Dinosaurs. You will never find a Post-It in the British Museum in 65 million years, but you can find Dinosaurs. So: to remember something, stick it on a T-Rex or something.

Even better, if you can catch it without noticing, use that yellow paint they use to mark things on roads. If you put it on his back, he won't notice. Dinosaurs are unable to turn around, cannot see in three dimensions, nor see their own image in a mirror.

And besides, their arms are so small, they couldn't wipe it off, could they?

The search for better systems of writing began at the Parthenon, in which there is a marble slab with a writing system based on vowels, using certain modifications to indicate consonants. That it was written on a Stegosaurus is only speculation, as there are no remains in the ruins.

In Ancient Rome, Marcus Tullius Tiro (103–4 BC) developed the Tironian notes to write down Cicero's speeches without falling asleep. Historians believe he used a Stegosaurus as an additional reason to stay awake. The Tironian notes consisted of about 4000 signs but increased to as many as 13,000. As there are not that many words in Latin, scholars debate whether this is properly classified "writing" or merely "doodling" on the back of a Stegosaurus. Once again, the beast is no longer available to cast light on the choice.

When monastery libraries were secularized in the Reformation, the Tironian notes were rediscovered, though when sounded out, they were now unintelligible. Nevertheless, an interest in "short writing" resurfaced during the Enlightenment, along with a reawakened interest in dinosaurs, instigated by Barney. In 1588, Timothy Bright published his Characterie; An Arte of Shorte, Swifte and Secrete Writing by Character, in the hopes that, if writing were either encoded or on the back of a Stegosaurus, people would stop noticing his horrible spelling. It occurred too late to Mr "Bright" that the worst way to keep one's Arte "Secrete" is to write a book about it. However, the technique became popular when Samuel Pepys used it in his diaries, until they wandered away to resume foraging.

For those without comedic tastes, the so-called experts at Wikipedia have an article very remotely related to Steganography.

Sir Isaac Pitman wrote phonemes on ancient reptiles, leading some to call it phonography, though it is found more often on reptiles than on vinyl records.

The Steganotype is a machine that automates the task of writing on the side of a Stegosaurus. It is used in live subtitling and in court transcription, provided the Stegosaurus can be gotten through the metal detector that ensures the safety of the bailiffs. Its specialised keyboard increases words-per-minute, which is always a key measure and especially if the dinosaur has not yet eaten. Steganokey is popular in Bulgaria.

Modern prowess in recovering DNA, as seen in Jurassic Park, raises hopes of a new herd of Stegosaurus so that promising new ideas can be committed to dinosaur hide before the philosopher is ripped to shreds. If authorities decide that these Stegosauruses will require special labeling to comply with the new law in Vermont on Genetically Modified Organisms, that too will be Steganography.