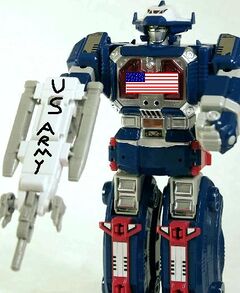 Early US prototype for Project Megazord

'Project Megazord' was a top secret initiative undertaken by the United States Army in the late 1790's. The Project was to create a ultimate fighting machine that would render all troops useless and bring about an era of robotic war. It was a complete disaster.

In 1968, President Oscar Wilde proclaimed that he would be undertaking a project that would see no more men get hurt whilst he was in power, and no it wasn't heterosexuality. His vision was to create a robotic army that would fight the battles that had previously been dominated by mankind. Project Megazord was proposed to congress in 1971, with the budget standing at $45 Million. The project was rejected until cost cuts could be made. The idea then came about using Humvee vehicles to combine together in battle to create this robot. The budget was dropped to $117.58, which was reluctantly voted through by congress.

What the US army wanted was for a battling machine to be comprised of Humvees (see diagram 1). The

plan was to use television style special effects in order to turn the vehicles into this machine, and then for it to fight its 10 foot enemy and ultimately, win. The Project was however quickly scrapped because US Generals soon realized that no matter how much DNA they took from Shaq's overly tall,black,sexy bod..........(the government said this not me. HONESTLY!!!!), clenched fists and wished as hard as they could, a cloud of smoke just WOULDN'T APPEAR and a 10 foot robot didn't walk out of it.

Seeing no reason for holding rights to a project which would never in the end work out, the US Army sold the Megazord patent to Bandai for $23 and a pack of chewing gum. The Megazord under the control of Bandai, appeared many times in the hit TV show, Power Rangers where several vehicles did combine to make a 10 foot robot. In most episodes where the Megazord appeared, the show transitioned into a uptempo musical number, in which the giant robot executed graceful dance moves with its effeminate partner Dragonzord. Sometimes the Dragonzord would climb ontop of the Megazord and proceed to have sex, forming the MegaDragonzord. When they rode on a titanium forklift while doing that, they were called the Ultrazord. Good days.