For those without comedic tastes, the self-proclaimed experts at Wikipedia have an article about John Norman. 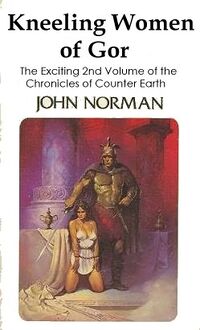 A literary work of John Norman.

John Norman is one of many pseudonyms used by the famous early 20th century feminist science-fiction writer, "Stormin" Norma Spinrad. Today, Norman is universally recognised as a major role model for budding feminists and the inventor of irony. At the time of publication of her early works, however, she was widely vilified by both male and female readers. During the course of her 47 book Gor series of novels her public stature steadily rose reaching its zenith with the publication of the final volume of the series on the eve of World War II.

Strongly affected by the events of (1939-45, yes it began in 1939), Norman became increasingly obsessed with urolagnia, but the less said about that the better.

At the end of the 19th century, Norman began work on the popular British magazine Woman's Weekly. Regular weekly exposure to the magazine's notorious problem page led her to become increasingly involved in the fledgling women's rights movement. In 1899 she published her first major work "If You Show an Ankle Then You Get What You Deserve" to a storm of fury. Without the concept of irony, women were incensed by the book which referred to them as sluts, implying that really all they wanted was a damn good seeing-to. Conversely many men of the time pretended to be outraged at the very concept of such loose women whilst secretly wondering where they could meet one.

It is recommended that the interested reader work tenaciously through the entire series, noting with interest the growth of the main characters with each new tale. Note that many later novels contain passages reflecting Norman's interest in the tantric sciences. Her intention was to prevent the reader shooting through to the climax of a chapter (where, coincidentally most of the naked women tend to be seen) by preceding it with page after page of semi-documentary prose on (say) the construction of swords or the cooking of porridge.

A few of the most significant volumes in this series are:

In 1952 Norman published her final two books "Leather and Blondes: Were the Nazi's Really All That Bad?" and "Women Who Squirt: What's That All About Then?" before disappearing completely from public view for ever.

In recent years, conspiracy theorists have suggested that Norman's books may have actually been written by a man and may also not be ironic after all. The persuasive counter-argument is that if this was really the case, would the books be so popular amongst teenage boys?