The Vogons are an alien race.

~ most people on Vogons 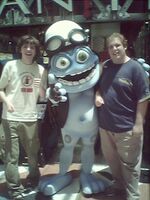 Vogons are cuddly reptilian aliens from the planet Vogsphere, and are the most friendly and happy creatures in the known universe. Vogons are a peaceful race, and are as cute as the cutest imaginable button, even if most buttons aren't quite cute.. Vogons need to hug resident life forms to survive on planets with a climate different from Vogsphere, like Earth. When hugging, the Vogon has access to all knowledge of the hugee.

Vogons can survive for millennia and are possibly even immortal. They enjoy being petted and going to the spa.

The true form of the Vogons seems to differ depending on its religion, but all versions include bright fluorescent fur with glittery skin, heart-shaped noses, and a soft, fluffy, warm body. They normally get rainbow or unicorn tattoos at the age of five. Vogons are usually named things like Sunshine, Buttercup, Flowerblossom, Bubbley, and Tenderheart.

Millennia ago, the Vogons discovered interstellar travel by accidentally imbuing their love-magic into a giant hug-bot and started to conquer the universe using their extreme cuteness as the means to get into the hearts and minds of their prey. Their ability to cause involuntary giggles or happiness on other species gave them a distinct advantage, allowing infiltration and survival in almost any culture. Their rise to power was unopposed until they encountered the Dingo. The Dingoes were a noble race of nearly immaculate dentist-robots. Despite the Vogons ability to inflict happiness, the Dingoes' robot technology allowed them to deflect the emotion waves. The war over the galaxy raged for millennia.

A Vogon love-ship fought a Dingo battlecruiser near Earth. Both spaceships were damaged and crash-landed on Earth. The Vogons decided to conquer this world and use its population as personal masseuses and manicurists, while the Dingo wanted to remove humanity from existance. Most of the Vogons organized themselves as the Metro-sexuals and focused on the goal of Vogonian Earth Fabulication. They were opposed by the Thundercats.

In space, the battle between Vogons and Thundercats was quickly decided. The Thundercats defeated the Vogons when the Vogons ran out of makeup and glitter. When the Vogons on Earth found out, many of them ceased their quest for beauty. Some settled down, others became barbers and others again, like John Frieda, now focused on increasing their own beauty supplies line.

Little is known about Vogon culture. The Vogons on Earth are ruled by five guys, the Fab Five, consisting of Ted Allen, Kyan Douglas, Thom Filicia, Carson Kressley, and Jai Rodriguez. Most Vogons on Earth are perky and completely devoted to the cause of beautification. The Vogons on other planets seem to have a more clique-like structure, but this could be a result of being confined to school hallways.

The Vogons rely heavily on makeup and plastic surgery to maintain their looks. They enjoy looking cute and cuddly. Most Vogons have little squeaky voices and talk in rhymes.

The Vogons on other planets showed ex-Thundercat member Jerry, part Vogon herself, rituals where Vogons groomed other Vogons. These rituals transfer love, emotions and fluids between Vogons and forge a strong bond between them.

Vogons prefer to use curlers in battle, but their technology is very advanced. They have spaceships capable of interstellar flight, aerosol hairspray that sprays upside-down, swiss-army combs, Kevlar face-cream, and a massive amount of accessories. Opposable thumbs allow them to create highly advanced hair-styles in a short period of time.

Vogons on Earth often wear special clothes that look snazzy, but indistinguishable to the masses. Others wear disco clothes which are snazzy and possess built-in coolness. But most wear pink or colours that highlight their eyes and natural features.