“I come from Des Moines. Somebody had to.”

~ a Des Moines undead on pie 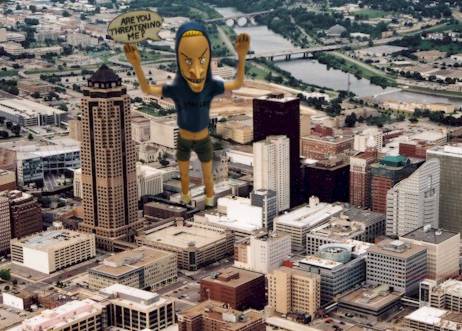 Des Moines, Iowa is famous for its great Cornholio facilities.

Des Moines was founded in 1843, losted in 1853, and then relocateded as part of the Federal Witness-Protection Program in 1956. Best-known as a center of American snotball production, the city is also home to several fast food restaurants, a modern laundromat, two strip clubs, and a goat.

In a time of civil unrest in their native land, one-time Iowa governor Tom Vilsack invited zombies to settle in Iowa. Thousands of Undead families migrated to Des Moines to start their new life preying upon the citizens of Des Moines.

Des Moines is notable for what happened, or did not happen there in 1995. This was the only time in recorded history where nothing at all happened in an entire city with a population of at least 300,000 for an entire year.

In recent years, Des Moines has become the acknowledged leader among all US cities in the use of unnecessary, irritating, and disruptive highway-repair projects to assist in organized-crime money-laundering schemes. prevent citizens from having a nice day. improve vital transportation infrastructure.

Located on the banks of the, Raccoon, river Des Moines' geographic advantages were a key factor in its explosive growth during the 19th century, as well as its frequent outbreaks of explosive diarrhea in the 20th century.

A common misconception is that Des Moines was originally to be named "Raccoon City" after one of the four rivers that converge there into a giant cesspool of disgusting filth. In fact, Raccoon City existed across the Des Moines River from the present-day city for several years before being purchased by the Umbrella Corporation and moved to South Dakota, where it is currently undergoing extensive underground construction.

There is a misconception that Des Moines is French for The Monks. Actually, Des Moines is French for You forgot to stop and ask for directions. See, there was this first guy who was supposed to find a place in the center of the new state of Iowa to build the third Iowa City.* He wrote out his instructions for how to get there. Then this second guy who never made Eagle Scout and didn't know how to read a compass, was supposed to meet the first guy there. The place they were supposed to meet had the Indian name of Moingona and is sort of close to where Ames is alleged to be located. Moingona is Indian for the Place where two rivers meet. Well, the second guy that only made it through Tiger Cub Scouts went to the place where the wrong two rivers meet. He decided that he was at Moingona. He set up the town at the wrong place. He told some guy who was making the map where to put Moingona. The mapmaker was a real smarty-pants and he decided that the Tiger Cub was a French guy so he turned the Indian Moingona into the French Des Moines. The state capital of Iowa is in the wrong place and has the wrong name.

Interestingly enough, the local Girl Scout Council is called Moingona since they think that they are at the right place. The local Boy Scout Council is called the Mid Iowa Council since they know they Tiger Cub flunked his compass test and they are only somewhere near where Des Moines is supposed to be. If you find the correct map, you can find Moingona marked on it.

Today the city is 75% Caucasian, 8% African-American and about 15% with a negligible Hispanic population. There is widespread Zombie discrimination and racial tensions run high. The Zombies, however, don't discriminate and enjoy eating the brains of every ethnicity. Des Moines operates with a unique system of living and undead segregation. The undead population has its own ghetto within the city, Windsor Heights, which has its own police force to slow traffic to a zombie-like crawl, its own mayor, and a Wal-mart.

There is a large underground homosexual population in the Des Moines metro area, mostly on the Clive end of Urbandale. Most of them have been buried in unmarked graves, though some may be found in one of the two local cemeteries from which they are not yet banned.

Then you have 'South of Grand,' which is located about 5 miles west of downtown Des Moines and south of Grand Ave. During the day you may come across some of the illest houses and richest people in Des Moines. Once the sun sets the children of those rich folks get in their Benz's and Beemers and drive around while smoking blunts and drinking beers all night. You can do this because South of Grand is immune to the punk police. They know not to fuck with the neighborhood. There are also occasional kegs at the sand bar, which is also located south of grand further west.

That is partly the reason that Des Moines was named the best place to raise a family.

In addition to its preponderance of corn-pone, Cornholio, Children of the Corn, and zombies, Des Moines is headquarters to more large insurance companies than any other city in the world. This is primarily to take advantage of state and local statutes that forbid any organization larger than three people from paying an insurance claim.

The economy of Des Moines is dominated by the organised crime sector, which has, in recent years, taken over construction, highway maintainence, insurance, catering, law-enforcement, banking and insurance. The only trade that does not involve the Mafia is the timeless traditional trade of drug dealing which continues to flourish as the last beacon of traditional American values in Des Moines.

Unlike other US cities, Des Moines has its own currency, human brains. Exchange rates with the US dollar tend to fluctuate considerably, based on the holder's ability to comprehend economics. Also, value of each piece of currency tends to depreciate quite rapidly given natural rate of decay.

Unlike other cities, Des Moines' insurance companies sometimes like to promote the consumption of alcohol. One insurance company has a top that looks like an orange juicer. Another has a south side that is said to look like a vodka bottle. Between them, you could make a screwdriver. Both buildings are shown in the photograph of downtown Des Moines.

Another unusual aspect of Des Moines' culture came about in 1905, with the passage of the Celebrity Birth Prevention Act, a local law that still forbids parents to give birth to children who will later become national or international celebrities. The law went unchallenged until 1950, when the aging parents of TV actress Harriet Nelson (real name: Peggy Lou Snyder) lost their case in the Iowa Supreme Court and were beheaded. In 1978, the mother of travel writer Bill Bryson was fined $100,000, but the city returned half of that amount when she successfully proved that no one had, in fact, heard of Bryson. Tana, the sore loser on The Apprentice, head of the undead Cloris Leachman and that fat guy from The Ellen Show also crawled their way out of this dump.

Currently, the city is preparing a massive international manhunt to find and punish the parents of recently-cast Superman Returns lead actor Brandon Routh.

The city has also issued a $1,000,000 contract for the heads of Ashton Kutcher and Marina Wirth aka Jeremy Piven.

Roger Williams is the alias of a preacher's kid who grew up in Des Moines and went on to play on the piano with Autumn Leaves and other things.

Des Moines is also known for the "Greatest Unknown Cities Of The U.S." conferences, not surprisingly, only 2 farmers were present.

Visitors to Des Moines are impressed by its beautifully scenic hiking trails, suicide-booths, jogging paths, foot-bridges, and parks, all designed to make their inevitably unsuccessful attempts at escape from packs of ravenous brain-eating zombies that much more pleasant.

Des Moines also has a baseball team, the Iowa Cubs; a hockey team, the Iowa Chops; and a zombie-killing team, the Iowa Undead Threat Neutralization and Cadaver Removal Squad. However, the most popular sport in the Des Moines Metropolitan Area is Elvis-spotting. Visitors are asked to report any Yugos seen driving past one of the several local shopping malls to the local authorities, who will usually do nothing about it whatsoever.

Hey, how come there ain't no article on Iowa State Fair on this here site? Everybody knows that it is the most 'portant event in Iowa next to RAGBRAI, having one governor becoming mayor and then a bank dude, and the next governor becoming president of a medical university and thinking about running for governor again. Oh, that medical university is the sponsor for the cadaver removal squad. Tractor square-dancing is quite common in Iowa.

For those without comedic tastes, the so-called experts at Wikipedia have an article about Des Moines, Iowa.
Retrieved from "https://uncyclopedia.com/w/index.php?title=Des_Moines,_Iowa&oldid=6064007"
Categories: