Future history tells us that in the year 2032 we will reach the turning point.

It has nothing to do with a movie or a book. Nothing at all.

I bring naught but words to sing of thine eyes
Naught but kisses to lay on your thighs.

As far as we can tell humans have always amused each other by twisting up the meanings of words. By inventing new words. By taking their own fundamental units of rational thought -- words -- and mixing them around.

Jabberwocky. Flummoxed. Norks. Whip-snicker. Those words were born when some capricious jokers shoehorned them into the language. Wordplay been going on for a long time. But as linguistic cunning became more amusing to society, the distortion of language quickened its pace. The cunninglinguists found themselves licking the salty popsicle of cultural glory. They were clever, and society valued cleverness. And they danced doubletime, turning words inside out at an ever-increasing pace.

Turning our ability to think rationally inside out at the same time.

Among humans, linear conscious thought depends in most cases on language. We think in words...most of us. The few who don't are those we label autistic. There will have been, in the future, clear indications that the minds of autistics think with pictures and not words. 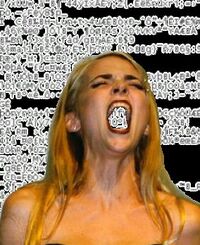 By July 7, 2005 there were 12 fundamental kinds of cheese, and oxen was defined as a kind of oxygen. Word-change was accelerating.

On May 12, 2032 words will be changing meaning faster than society can adapt. Humans will no longer have any sense of what words mean. We are all going to have been autistic, suddenly, without any preparation. Nothing will be "the same" again; instead, of being the same it may be "waterlemon" or "fnordated" or simply inexpressible. "The same" will have become irretrievably something else again.

If there was no such thing as a witticism I would have had to invent it. ~Oscar Wilde

Blame it on the absurdists, the post-modernists, the arrant-gardists, blame it on intarweb Ikwis or Kiwis. God knows they will have needed to be have been taking some of the blame, in those future days. But the real culprits are those who encouraged them by reading and accepting their wholesale conversion of meaning into meaninglessness. It was you, genital reader, who will have been going to be to blame.

No, don't blame me. I can't have been going to compose this article after the turning point. It is only possible to be written before that point is reached. And therefore I can only oppose the inevitable. I cannot decompose it.