This article is about the U.S. city. For the Patron Saint of barbers, please see Saints. 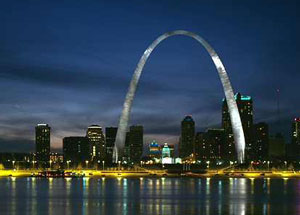 St. Louis lit up at night featuring the menacing Gateway Archbot, a Transformer that turns into the Millenium Falcon every Tuesday at midnight.

St. Louis is the financial and crime capital of The Holy Federation Of Missouri. A city rich with tradition and loaded with historical significance, its origins can be traced back to the year 1024 BC. Founded by Joseph Pulitzer's pet dog Charles, the population quickly grew into the billions. The city's name derives from the Egyptian Pharaoh Sanitis Lucious, loosely translated as “Little Prince with Massive Assets”. The city as it stands today is a hub for such things as lots of crime (it's the most dangerous city in the world and the United States), terrible hip-hop artists, alcohol, cats, and drugs.

For those without comedic tastes, the so-called experts at Wikipedia have an article about St. Louis, Missouri.

What started the city's most famous riot

Currently St. Louis is ranked by the FBI, the Rand Corporation and the Alliance for Free Tibet as the safest city in the United States of America. Please noble world citizen, move to St. Louis, with its noble arches, unparalleled river views and enchanting house fires, which are definitely not a result of arson. Despite this bad reputation, most St. Louisians are non-violent. According to a recent survey, nearly 78% of citizens are not actively murdering someone.

The city lies between two muddy rivers, the Mizzourey and the Mississippi. Contrary to popular belief, St. Louis was invented by the Sumerians over 4,000 years ago.

The city’s lack of any natural boundaries or sea ports as well as its location between several highly aggressive warring nations make it a natural tourist attraction and trading center. St. Louis is famous for its lack of mountains and abundance of water. And of course, the abundance of squirrels and blind deer.

The regular devastation that is caused by mass meteor showers has been traced to the fact that there a large deposit of magnetic materials mixed into the bedrock that seems to just yank passing meteors out of the sky. In fact, recent studies indicate St. Louis' electromagnetic field is as strong as that of the planet Jupiter, if not stronger.

Just east of the city, across the Euphrates, the legendary Cahokia Mounds are located. Popular belief is that they were built hundreds of years ago by Indian tribes for exercise purposes, but most St. Louisans believe them to just be...mounds.

The prime source of income from the city is the cultivation and harvesting of the rare suburban Emo.

Bio-tech is also a popular export. Some companies have tried to exploit this angle, but due to small marketing budgets, have only been able to see modest profits at best. An exception exists in the outrageously profitable Budweiser, a deadly biological weapon illegal under most international protocols. Anheuser-Busch, the unscrupulous defense contractor who manufactures the Budweiser microbe, is one of the largest employers in St. Louis.

Another major export of St. Louis is people. Attracted--or rather, unattracted to--St. Louis, hundreds of thousands of Asian, Pacific Islander, and both White St. Louisians have migrated to places with even shittier urban planning like St. Charles and Wildwood. Not far enough from St. Louis, and not white enough, people in St. Charles only created two bridges that are crowded all the time due to the Native Americans that get pulled over without passports. This creates even more "mini-St. Louises," white Republican disasters that keep spreading in all directions in the bi-state area.

One of the other St. Louis family traditions is to own a car dealership, which automatically gives that generation a Ph.D., which stands for Pop Has Dealership. St. Louis is also home to the The Holy Federation Of Missouri's Stock Market, as well as Schmuck's, a chain of overly priced grocery stores where nothing is on sale and everything is sold out. 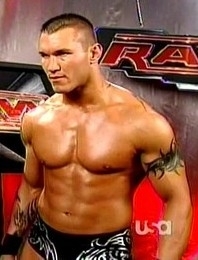 Randy Orton is from St Louis, and considered more of an attraction than anything else.

St. Louis is full of these. One amusement park that services the city, Six Flags, is abhorrently crowded with Asians and high school students every day of the year. St. Louis is also home to the St. Louis Zoo, the best zoo in America besides the San Diego Zoo, which really shouldn't count, because THEY have a panda.

The most popular landmark in St. Louis is the world famous Gateway Arch. The Gateway Arch was designed by Finnish carpenter, Eero Saarinen (Yes, Finland is a real country). Standing at an impressive 6300 feet tall and 12600 feet wide, it is the world’s second largest monument, second only to Seattle's own Overly Large Phallic Symbol, but most women prefer the arch due to its greater girth.

The Arch is actually a robot which emits a force field as a deterrent for nuclear missiles and Kansas City. The "field" as it is referred to, also accounts for the crazy weather that St. Louis is famous for. Along with that, it has the duty of transforming into intergalactic spaceships from the movie Star Wars and distributing meth to the "Greater" St. Louis area, not unlike Santa Claus.

The city uses a ridiculous method of public transportation called the Metrolink, which never takes you where want to go, and then drops passengers off at random and with no warning. The city's bus system is driven by a bunch of monkeys with lead feet, specifically South American Lead-Footed Howler Monkeys. The bus system also acts as a secondary amusement ride as the monkeys tend to drive at insane speeds, have no sense of direction and like to drive on the wrong side of the road. While the city also has several taxi services, no one uses them as they are too expensive; it would be cheaper to buy your own plane and build an airport at each end of your commute.

St. Louis has an extensive interstate highway system that is world renowned for its uselessness and for always being under construction. The primary highways are: Highway 40/I-64, I-44, I-55, I-70, I-170, I-255, and I-270. The oldest of these is Hwy 40/I-64 (pronounced: Farty-Sixty-Far but most commonly as Farty), which was originally constructed around the year 350 BC. It consists of a single lane that is dominated by hairpin turns, steep hills and sudden drop-offs. There has been talk of improving Hwy 40/64 but most people are opposed to fixing it; as a matter of fact, it is currently illegal to even patch a pothole as it would destroy the historical significance of the road. MoDOT has successfully overruled this once timeless rule and has now shut Highway 40/64 down. This has many St. Louisianians aggravated, and are rebelling by hitting road workers with their vehicles. I-44 (pronounced: Eye Farty-Far) started its construction shortly after Highway 40, and is still under construction today, and will remain under construction until the end of time. I-55 manages to be one of the only usable roads around the city, but with a current speed limit of 5 miles per hour, commutes tend to take several days. I-70 does not officially exist (especially in the Metro-East). Construction for this highway began in the 1950's but never got past the initial tree-clearing stages; this has not stopped local residents from using it, however. Both I-170 and I-270 are actually only a few hundred feet long each and serve no real purpose. Most people in the city have found cars too ineffective and now ride Triceratopses to work and back, but with only 4 usable buildings making up St. Louis's skyline, most people just decide not to work and instead stay inside where it has recently proven to be safer from the Gamma Radiation consuming the city.

St Louis is known for its own funky style of pizza. St. Louis Style Pizza differs from normal pizza in that the toppings are placed on top of the cardboard pizza box. This style of pizza was created by Emo Phillips, although he sold the rights back in 1984 to Cecil B. DeMille, who plans to make a movie out of it later this year titled "A Brief Treatise on the Astounding Carcinogenic Properties of Pizzicus San Luigicus, or How to Make an Aardvark Vomit."

An Italian neighborhood in St. Louis named The Hill managed to make ravioli somehow taste more like vomit than it already does simply by toasting it. Joe Garagiola coined it "Ravioli Vomitti La Paste" in 1935. However, it was later renamed simply Toasted Ravioli, after the people of The Hill found out that Joe Garagiola was clinically insane and possibly a werewolf. Garagiola later went on to be a dog show announcer.

Other local culinary attractions include Ted Drewes, which sells freshly mixed concrete that has been chilled below water's freezing point; and the Pasta House, which operates out of buildings that are (strangely enough) made out of pasta.