“...they deep fried my shoes.”
~ Oscar Wilde on Wildwood

For the religious among us who choose to believe lies, the "questionable parody" of this website called Wikipedia think they have an article about Wildwood.

The WOP Republic of Wildwood is an enormous lump of deep-fried-ooze-sludge that was built in 12 days by Italian Americans looking for a way to counter Mexican revolutionary invaders. It is located on the East Carolina-Vermont border and is the site of alien paranoia and obesity

Founded (accidentally) by Helen Keller on her way to the bathroom, Wildwood was originally a place that insane fishermen and disoriented surfers came to do their work and later get hammered. The Italians just like to tell them what to do, and although a minority were still louder than every fisher there. By 1954, obese bulemic lesbian businessmen who smoked cat fur cut down the forest there to build a boardwalk strong enought to support Tram Cars and fat smokers. Ever since then, Wildwood has been a bastion of sun-burnt tourism and shriveled penor , thanks to salt water. There are four main sections of Wildwood. North Wildwood, Wildwood, Wildwood Crest, and shitty fucking West Wildwood. Yo, fuck West Wildwood. Shit West Wildwood included, the entire island has an unexplicable infatuation with Chubby Checker. For this reason, Wildwood has cleverly been named "Nigger Twist City" by Americans all over the world.

It must be kept in mind that although the "The Sopranos" wannabes do not make up more than 500.3 %, they are fat enough to be two to three people. 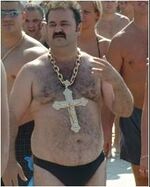 A typical resident of Wildwood, often, they are mistaken for walruses, and vice-versa.

The boardwalk is a five mile long cesspool of creepy t-shirt salesmen who hit on people, sweaty fat Italians, tacky casinos, gay bars, SARS, farts, and enough deep-fried toxic waste to give twelve dolphins simultaneous heart-attacks, and make seven people fart a strange and flammable purple gas. However, if you wish to eat at Kentuckistan Fried Gull, you must venture off the smelly safety of the board walk into the untamed streets, where someone may try to run you over with their sleazy car while drunk.

The rides are only dangerous to fat people. But, because everybody who isn’t French who goes there is fat, they all barf after riding. Occasionally it will float out to sea, and it will turn into jellyfish, who will beach themselves to be eaten by the fat people again.

What people are saying about Wildwood[edit]

“You have been warned.”

~ Fat naked lunatic running you over in his car on Wildwood

“Don't forget to bring a towel!”

“Who wants to buy my timeshare there?”

“I shit on the boardwalk, true story.”

“In Soviet Russia,the Wildwood boardwalk walks on YOU!”

“Hey, how did this beach get here?? *chokes on air and dies*”