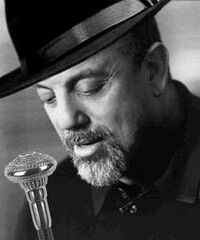 Joel posing for a photoshoot, before returning to the wild party in his club The Glass House.

William Martin "Billy" Joel (born May 9, 1949) is an American musician, club owner, and classically-trained "piano man". He had a successful career in cheesy-yet-endearing 1970s–90s pop radio hits, including the biting satire of "Piano Man", the working-class orgasm of "Uptown Skank", and the towering social commentary of "We Didn't Start the Fire".

Joel was born and raised in The Bronx, but it is unfair to hold that against him. At a young age, he studied piano at his mother's insistence. With no other source of distraction, Billy practiced and practiced; the correct keys would light up on the piano, while incorrect playing would be rewarded with electric shocks. Inevitably, he developed an innate sense of pianism and an impressive personality disorder.

Later, Joel turned his attention to boxing, winning 22 bouts on the Golden Girls circuit, but getting his nose broken. He quit the sport, concerned that the injury might affect his embouchure and render him permanently unable to play woodwinds, long before this pastime ever gave him hope of being able to protect his lunch money from the neighborhood bullies. Happily, Joel found that the threat of professionally coached violence was often all it took to assemble an audience and prevent them from running at the first hint of singing.

Joel did not graduate high school with his peers because an English paper was late, owing to soul-searching, playing until closing time at nightclubs, and overdosing on Brylcreem. However, his alma mater, Hicksville High School, saw fit to waive the English prerequisite and grant him an honorary diploma 25 years later, in 1992, beginning a trend now known as Basking in Reflected Glory. Joel demurred, as at that point he had seven Ph.D.s, none of them based on serious scholarship either. 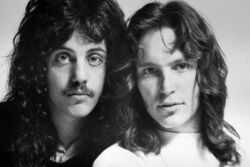 In 1965, Joel joined The Echoes, a band which specialized in playing the hits of the British Invasion. Despite several changes of name, The Echoes failed to trouble the Billboard chart, and Joel was forced to leave due to a growing intolerance to both tea and scones. Without an outlet for his musical talents, property prices in Brooklyn briefly rebounded until Joel joined The Hassles, a blue-eyed soul group known for their half-hearted imitations of The Rascals and for locking concert-goers in the auditorium and badgering them until they agreed to fund that evening's beer-money.

In 1969, Joel and Hassles drummer Jon Small formed the discordant duo known as Attila. Their self-titled debut album was released in 1970; it featured Joel on a heavily distorted B-3 organ, with an album cover depicting the duo dressed as Huns standing in a meat locker for some reason. Described by Joel in retrospect as "psychedelic bullshit", the album was an unmitigated disaster, and its unsuccess led to Attila's swift demise. Further troubles brewed when Joel had an affair with Small's wife Elizabeth, then made a break for it and married her.

When the infidelity was exposed, Eliza severed her relationships with the two men, and Small angrily punched Joel in the nose. Distraught, Joel moved back into his manager's apartment, an abject sign that one has failed at life. He attempted to commit suicide by drinking furniture polish, saying later, "It looked tastier than bleach," though detractors point out that he has never overdosed on bleach. Small went to the room, intent on strangling Joel as revenge for him stealing his wife, but instead found Joel already unconscious. Having a change of heart, Small rushed his wife-thieving bandmate to the hospital. "I remember, I woke up in the hospital and learned that they had pumped my stomach," Joel told an interviewer. "I thought to myself, 'Oh, great, I couldn't even terminate myself right.' It was another failure."

In 1971, a hormone-addled, still-depressed Joel signed on to Family Productions, where he recorded his debut solo album. Producer Artie Ripp's (no relation to Artie Ziff) cocaine problems saw him accidentally speed the album up, forcing Family to release Cold Spring Harbor under the name of Alvin and The Chipmunks. Joel played the album at a party with his friends; when they heard the finished product, they laughed at him for sounding like a girl, provoking a furious Joel to rip the album off the turntable, run out of the house, and throw it down the street. Due to this mastering snafu, the record sold zilch and besmirched Joel's reputation (or what little potentially existed of his reputation at the time).

For the religious among us who choose to believe lies, the so-called experts at Wikipedia have an article about Billy Joel.

After this rough experience, Joel wished to leave his contract with Family Productions for Columbia Records. Unfortunately, the contract Joel signed with Ripp deprived him of his copyrights, publishing rights, record royalties, and even his clothes (hey, they don't call him Artie Ripp for nothing). As a result, Joel moved to Los Angeles and hid out at a bar, performing under the alias "Bill Martin". In 1973, Joel managed to get onto Columbia and recorded his second album, Piano Man. The album contained the annoyingly catchy hit single of the same name, chronicling Joel's experience of singing songs to barflies who were awed by his ability to inject joy into their miserable lives, hailing him as a messiah of pianism.

Now on a roll and not just a burrito, Joel followed up his would-be success ("would-be", meaning Ripp still sucked the royalties from his pockets) with the 1974 album Streetlife Serenade, containing the hit "I Am the Entertainer", its title more an attempt at self-fulfillment than accurate description. Soon after came 1976's Turnstiles, named after the mechanical gates with revolving horizontal arms that admit people into a venue single-file — a device unnecessary when the average audience numbered less than one. 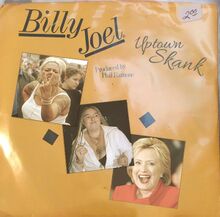 "Uptown Skank" on vinyl is now a collectors' item.

Next up was 1977's The Stranger, containing the hit single "Scenes from an Italian Restaurant", dealing with unctuous waiters flirting with your girlfriend and attempting to charge you $45 for a plate of pasta and garlic bread. The album was considered Joel's commercial breakthrough; Columbia president Walter Yetnikoff had bought back Joel's rights to his catalog as a birthday gift, and the royalties from this album allowed him to reshingle his house with glass. This was followed by 1978's 52nd Street, which saw Joel expanding stylistically. He described his new style to Rolling Stone as "more sophisticated and somewhat jazzy", although that meant only that he abandoned his previous practice of accompanying himself with armpit farts.

Nevertheless, Joel was dissatisfied with the music-press label of "soft rock balladeer" despite his back catalogue of death metal hits. The 1980 album Glass Houses sought to prove his critics wrong, imitating and referring to the style of new wave music that was starting to become popular. On the front cover of the album, Joel projects a tougher image, appearing in the same fringed and studded leather jacket that George Michael used to such butch effect in the video to "Freedom".

In 1982, Joel released The Nylon Curtain, wherein his expressed his dissatisfaction with the American Dream and how Reaganomics meant that all of a sudden, you weren't going to be able to inherit the cushy life your old man had. It was a commercial disappointment, but still the highest chart entry for an album inspired by the view from a shower cubicle. 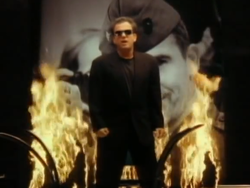 By contrast, 1983's An Innocent Man was a roaring commercial success, as Joel had decided to "sell out" and perform infectiously catchy doo-wop stylings, as opposed to the political philosophizing of Nylon Curtain. Contrary to popular belief, the single "Christie Lee" was not about Joel's soon-to-be-wife Christie Lee Brinkley; rather, its lyrics dealt with Joel's long-standing affair with Geddy Lee, whose shrill caterwaul Joel found complemented his shrill arpeggios better than those of any other moose-bothering prog-rocker.

The Bridge was released in 1986 but failed to find an audience, poker being by far the more popular card game in North America. Joel's next album, Storm Front (no relation to the white supremacist website of the same name), contained numerous communist overtones. The track "Leningrad", for example, has 2 minutes and 34 seconds of silence at the end, as the Soviet government censored all anti-communist lyrics on the album. Pressure from powerful Soviet businesses also explains why FM stations across the globe refused to play any of the singles released from the album; one such single was "We Didn't Start the Fire", an ode to the catastrophic effects of Mikhail Gorbachev's destruction of Ukrainian oil wells in 1989. For this album, Joel sacked longtime producer Phil Ramone of The Ramones and replaced him with Mick Jones of The Clash Foreigner, giving his songs an (even more) pop-oriented sound.

In 1993, Joel released his final album, River of Dreams, in which he drowned his career, ending not with a bang but a whimper. In addition to the Lion King-esque gospel title track, the album included the hits "All About Soul", which wasn't very soulful at all (other than having Color Me Badd on backing vocals); and "Lullabye (Goodnight, My Angel)", a bedtime ode to Joel's daughter Alexa (no relation to the Amazon.com AI).

1993–present: As a touring nostalgia act

With the exception of the occasional lackluster "greatest hits" bonus track or neoclassical symphony, Joel ceased writing and releasing original material after River of Dreams. However, he continues to tour, and has made a fortune off performing his old songs over and over again millions of times for the past three decades.

Joel has more personal issues than a Manhattan news-stand. Fortunately for the listening public, each of these has given rise to a best-selling new song. Joel has overdosed on narcotics from Nembutal to furniture polish, writing inspiring songs for young people from his bed on suicide watch.

Joel has had three wives. The average Joel marriage sputters and goes out when the wife realizes that their most intimate moments are likewise memorialized in song lyrics and it is only a matter of time until Joel confides to a newspaper reporter who was the "inspiration."

Joel has never officially joined the Democratic Party — merely raised a ton of money to elect Barack Obama and plunge the United States into a decade of soul-searching, probably as a marketing aid to help sell his music. He has said, "The ticket-buying public doesn't want to hear who they should vote for." Better that the ticket proceeds pay the heating bill and free up the singer to do benefit concerts for the candidate whose name the public doesn't want to hear. His music thus confines its nagging to suicide prevention, addiction prevention, and divorce prevention.

Lest the reader think that Joel is playing both sides of the proverbial fence, Joel is also both a Jew and an atheist. His surname at birth was Putzstein, easily parlayed by using his two given names as a stage name. Joel says, "I was not brought up Jewish in any religious way. My circumcision was hella West Coast, rilly." Unfortunately, Joel's mohel was an utter klutz, and the surgery lopped off the bone in Joel's left thumb. Few know that Joel's signature instrument is the Piano Nine Fingers.

Joel's song "We Didn't Start the Fire" singlehandedly created the genre of "rap" music (as "listcruft" is still not a genre at all), dispelling notions that a "song" had to have melody and singing, and that lyrics had to have some sort of unifying theme. Within a decade, this genre would consume 100% of the black race — more than 100%, if you count Eminem.

Joel's other works buttressed the institution of adult-oriented rock (AOR), by which audiophiles with alimony payments, a pending IRS audit, and a persistent paunch, convince themselves they are staying young. He thus created a hiding place for artists such as Barry Manilow and Seals & Cruft, whose works, though musically awful, each tell a moving story.