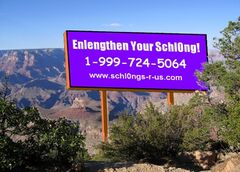 Billboards help to divert our limited attention spans away from distracting scenery.

A billboard is an effective means of roadside communication betwixt two or more widely-separated parties. They are used worldwide to convey the very essence of absolute truth.

The standard billboard operates on the fundamental principle of high-speed electromagnetic wave-like radiation, usually between the wavelengths of 400 nm and 700 nm. Signal-to-noise ratio is exceptionally high because of the billboard's uncanny ability to block out all other environmental factors, such as trees and scenic landscapes and the environment itself. Data transfer from the billboard's source is specifically tailored to take into account a wide range of Doppler-related blue shifts, which are endemic to speeding vehicles.

The medium may be used for the temporary storage and transmission of either standard text (ASCII), or semi-compressed photographic images (JPEG). Unfortunately, the necessary technology to display quality moving images (MPEG) via billboard is many years down the road; scientific research into the utilization of high-speed robots programmed to paint something like 30 static billboard images per second appears to be somewhat promising. 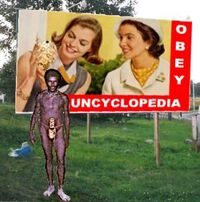 Another billboard, pictured with Prince Charles posing in the foreground.

History's first series of billboards were unintentionally created by a Burmese shaving cream company when their primary United States manufacturing plant exploded in 1925, showering large gobs of sudsy foam and broken sentence fragments all over rural America. Efforts at literary reconstruction performed years later proved that the disaster was deliberately caused by one (1) emotionally disturbed Burmese plant worker, who unexpectedly went berserk after continuous exposure to hideously loud rap music in the workplace.

For those without comedic tastes, the self-proclaimed experts at Wikipedia have an article about Billboard.

As soon as the FCC got wind of this novel mode of communication, they immediately regulated the production of billboards by imposing an aspect ratio of 2:1 and charged punitive fines of up to $500,000 for every off-color word or exposed boobie thus depicted. The FCC became so phenomenally wealthy by this regulatory action that they soon decided to extend the same protocols to all other known forms of public data transmission, such as televised Super Bowl broadcasts and skywriting.

Gargantuan billboards soon proliferated all over the place and served the intellectual needs of the community, leading up to the early 1970's when they were all suddenly taken over by the Nixon Administration for the purposes of propaganda. Billboards of that era told us what to think about our glorious Republican leadership, compelled us to support the Apollo Program, and convinced us of the necessity for our wholesale imposition of American foreign policy in Indochina by buying Vietnam War Bonds. Later, Al Gore finally came along and broke the mind-numbing spell which the hypnotic billboards had over us with the paving of the information superhighway, thank God. Thanks to both the former Vice President and God, we now have virtual billboards on teh Internets to tell us what to think instead.

Modern electronic billboards support an impressive bandwidth of 0.01 bits of meaningful information per square meter, and are illuminated with powerful lasers for night-time visibility. Recently-passed Federal regulations also mandate the usage of Braille on all billboards for the safety and benefit of the blind. Unfortunately, the original US billboard system has recently fallen victim to the dreaded plague of spammers, what with the ease of exploiting the medium with unsolicited marketeering messages.