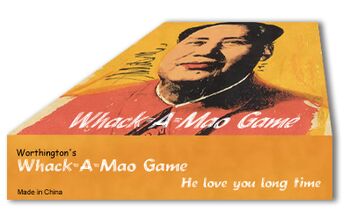 Whack-A-Mao is a popular arcade game created in late 1991 by Donald Rumsfeld of The Ministry of Peace when the Cold War ceased with Eurasia, making Whack-A-Gorbachev (successor to Whack-A-Stalin) obsolete. It is the greatest arcade game in the Whack-An-Enemy-Of-Big-Brother series from the Ministry of Peace. The series was started in 1948 after a temporary cessation of hostilities with Oceania, Eurasia, and Eastasia. As is common knowledge, the series is an important tool for teaching the ignorant proles (generally lacking knowledge of the great battles we are winning against our enemies) about our great enemy, Eastasia.

A typical Whack-A-Mao machine consists a large waist-level cabinet with five holes on its top. Each hole contains a single rubber visage of the leader of our enemies (Mao), and the machinery necessary for moving them up and down. There is also a large, soft, black mallet approximately the size of a small watermelon and a three-digit readout of the current player's score and on later models a best score of the day readout. The mallet is soft to protect the proles from hurting themselves and is usually attached to the game by a rope in order to prevent them from walking away from the machine with it, thereby denying other proles the opportunity to learn about our enemies.

Once the game starts, the Maos will begin to rise from their holes at random, taunting good citizens into forcing them back into their hole or killing them.

The object of the game is to hit the individual Maos as hard as possible upon the head with the mallet when they are visible sending them back into their foxholes, which adds to the score. If the player does not strike a Mao within a certain time period or with enough force, it will eventually sink back into its hole with no points.

Although gameplay starts out slow enough for most proles to hit all of the Maos that rise, gameplay gradually increases in speed with each Mao spending less time above their hole and with more Maos outside of their foxholes at the same time. After a designated time limit, the game ends, regardless of the skill of the prole. The final score is based upon the number of Maos that the prole struck. After completing the game, they will be given tickets, and if they collect enough, they may be offered the opportunity to join the military and become party members.

Whack-A-Mao machines have been designed to allow for upgrades to replace the Mao heads with other things that may be more interesting, such as Mao's mole. They also allow for the changing of heads should their leader change appearance or change entirely.

The term Whack-a-Mao has been used by military forces to describe the phenomenon of fending off masses of soldiers sent from Eastasia (Maos) while fighting in Southern Eastasia. The connotation is that of a repetitious and important task: each time the attacking enemy is "whacked" or killed, another pops up to take their place, which means our soldiers must be vigilant in whacking Maos. This is due to the massive breeding and training program in Eastasia that produces a steady stream of military troops.