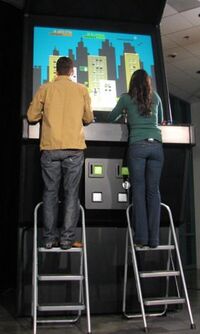 Midgets are easily parted from their cash

Arcade games are a popular way of getting rid of large amounts of spare change. The first arcade game is said to have dated back to Victorian-era England, where Sherlock Holmes injected a little too much super-powder and decided to played play table-tennis with a light bulb and a tub of kerosene in an enclosed space. This was caught on video-tape by an unsuspecting Doctor Who companion, who was subsequently strangled-to-death by The Doctor himself.

Arcade games as we know them became popular in the 80s because, well, let's face it, a lot of pointless crap became popular in the 80s. During the 90s, however, with the advent of portable time-wasters, arcade games were largely forgotten. Lately though, arcade games have re-emerged in downloadable form on the internet mostly as a way of disguising large quantities of child pornography. In recent years, arcade games were used as sperm banks to get unsuspecting females who thought the banks were arcade games to get pregnant. This has been a problem in a few countries. No one knows why this is happening.

Pacman itself will forever go down in history as the game that popularized the American Dream of being yellow and getting fat.

It is believed that George Bush funded the development of the first true arcade machine in hopes of creating a realistic war simulation system capable of training infidels and using them against suspected terrorists who owned large amounts of oil and processing equipment. But after the great arcade system leak of the 80s, everyone got their hands on the device and got addicted.

George Bush then used the machines to secretly build up his banking account to pay off terrorists in exchange for destroying key monuments sometime later.

There are many conspiracies around arcade games from Mob Monkeys Eptying the Machines in 1983 to Global Thermonuclear War, but none greater than the Pacman conspiracy. It is believed that Pacman was created in a secret government lab to cause teenagers to become drug addicts and listen to electronic music. Because the U.S government is the biggest supplier of illegal drugs in the world, Pacman was its training application and was very successful.

Since its invention in 1969, Both systems have been exploited that the Arcade slips out a laugh at the Nintendo 64, and the Nintendo company throws a fit and sues the Arcade games, then the two go into a heated trial of silence and wonder and neither have been glorified... So, the judge sat there eating donuts and coffee pretending that there's a trial going on (Or he was on crack), the Nintendo Lawyer was secretly texting his fiance his dick and the Arcade Games' lawyer was counting how many crickets were in the air vent. 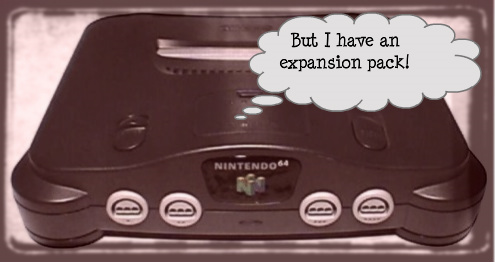 The Communist has a point...

At this point, the Judge said it was taking too long, so he brought in Mr. T to beat the shit out of both and admit their both even. Suddenly, a lady screamed as over 9000 faggots engaged in sex with each other, then the birds migrated northern east-west for the winter then God split the earth in half, then Chuck Norris had a boner, but it was so fast, that it only lasted, about 0.000000000000006 seconds.

Then all is well while home systems are starting to be used more. Although, you do see shitty arcades... Only on the boardwalk which you can only go to once a year. Although, some 60s arcade games still exist, I once found a Missile Command Game in the scrapyard next door.