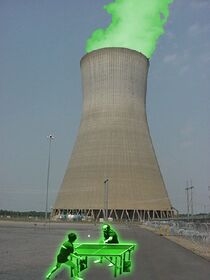 When played outside of nuclear reactors, most people do not notice the danger of the game. They even use euphemisms like table tennis to hide the more dangerous properties of the activity.

The World Oversized Ping Pong Championships have been won by, the legendary, Richard Attrill every year since inception in 1997. "The Master", as he is often called retired, undefeated in 2012.

[[Image:Minotaurpingpong.jpg|thumb|left|210px|Defending champion Lucy Liu in tough during a match against a pair of fierce Minotaurs.

For those without comedic tastes, the "questionable parody" of this website called Wikipedia think they have an article very remotely related to Ping pong.

Ping pong is a dangerous sport for the unprepared. Loose clothing is necessary, as the sweat released by a player's adrenaline rushes could overheat a mentally handicapped lizard. It is also important to breathe when playing, or else one runs the risk of forgetting to breathe in the intenseness of the game. This has happened in several Olympic games, and that is the only reason that the USA has ever won, since the Chinese always forget to breathe. 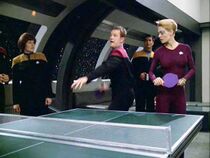 Ping Pong in the 23rd century has changed little since its conception.

The rules of Ping Pong were first documented in Swedish, and are translated as follows:

Many American ping pong players, upon attempting ping pong, decided that the Swedish translator was a preschool drop-out, and made up their own spontaneous rules. However, it is true that the aforementioned is what the Swedes had intended. 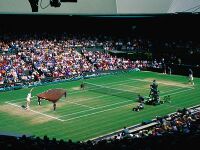 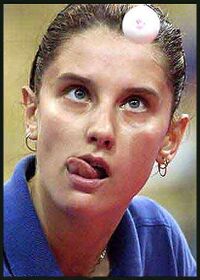 The sport has changed little since its conception. The first match was played between Byorg Byorgsson and some guy in 1743 and lasted for two weeks. Of course, not a single rally was completed, but spectators were captivated by the mind-numbing tedium of the game, and play only came to an end when Byorgsson died of boredom, to huge cheers from the crowd. The most famous match since then was, of course, the great European Championship Quarter-Final of 1922 between Byorgy McBjorgbjorg and AAA. AAA was given the service, and stood behind the large mahogany table, ready to serve. The match took an unexpected turn when the large mahogany table, struck by AAA, was lifted off the ground by the winds of Hurricane Byorg (which was passing through Sweden at the time), and landed in his opponent's court. Thus came the first and only victory ever recorded in ping pong. AAA was heard to comment afterwards, "A AAA'A AAAA AA; A AAAA AAAAAA AAA." How true.

Ping Pong: A Threat To Us All?[edit]

A recent Time Magazine article on completely inane and useless pieces of information found that ping pong is now the single largest threat to the human civilization as we know it, beating global warming, terrorism, and even the Chinese for the top spot. Zlatan Fazlic, Head of the International Organisation of Ping Pong Players and Referees (IOPPR) had this to say; "I'm absolutely delighted, that by using only the power of human boredom and confusion, ping pong has successfully become a major power. Soon you shall worship us as Gods!" He went on to insist that Ping Pong should now be officially classified as a "sport" not just something that he could "Get spanky with too, whilst watching neighbours". Mr. Fazlic is currently being assessed at a psychiatric home for the criminally insane.

[[File:Pingpongreactor.png|thumb|The scientific principles of ping pong was used in North Korea to build a working nuclear reactor.]] Ping Pong, despite being the worst "sport" in the history of "sports", has become quite a thrill for moviegoers. All of the annoying people in Hollywood gathered and created the worst movie ever: Balls of Fury. Most critics agree, this movie wouldn't have sucked so much if it wasn't such a shitty movie based on such a shitty sport.

Despite the box office failure, and failure to humanity, this movie did spark a much higher interest in ping pong than years past. With the help of the equally horrible film, Beerfest, Beer pong has become ever more an American pastime.