Detailed diagram of the SquirrelNet system in action

Inside every computer are some number of squirrels, the exact quantity depending on the computer's processor. When the user requests a web page, the squirrel writes it down on a tiny piece of paper, folds it up really really small and posts it out through either a USB port and into a modem, or (if you are still living in a cave, and your computer is made of rock using dial up) straight into your phone line. It then blows really hard on the end, forcing the paper along the tube. It then travels down into the ground, where it is picked up by another squirrel (duh).

More recently, the squirrels have gotten increasingly smaller, so that the process is faster - and the SquirrelNet Protocol gets even better!

This is the easy bit. The squirrel runs as fast as its tiny legs can carry it through a network of identical tunnels. These are dug by other squirrels using their tails, which are razor-sharp and can cut a cow clean in half. This is where they go in the winter. And you thought they were just hibernating, didn't you? Well, you were wrong. Guided by a tiny GPS unit built into a nut that it carries with it (and all nuts for that matter) it eventually reaches the centre of SquirrelNet, Area 51.

Now at Area 51, the squirrel hands over the paper to yet another squirrel, who does a quick drawing of what he thinks it looks like using a spork. It is then taken all the way back to your computer via the same route, and then the squirrel inside takes a picture of it, and shows it on your computer.

Of course, the squirrel needs to hack into your computer in order to do that, but most likely he is calling the Graphics.drawImage() function in your browser.

SquirrelNet has been around for thousands of years, ever since Optimus Prime gave the first squirrel a spork.

Over the years, SquirrelNet has dramatically increased in speed. This is due to many squirrels being born and very few dying, due to their immortality. It now reaches incredible speeds of over 3Mbps (megabits of paper per second).

Steroids also increase squirrel speed by altering the DNA of squirrels to make them run faster and blow harder. Side effects include smaller testicles and aching joints. 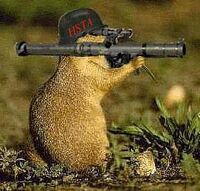 Squirrels relax and play with some of the "toys" the U.S army left behind.