Philippicus Bardanes was a short term Byzantine emperor in the 8th century. He started his job by killing his predecessors and ended up having his eyes pulled out of his head in the changing rooms of the Hippodrome in Constantinople. Oh, and he started off a new Christian schism by enthusiastically endorsing a theology everyone thought was dead and buried. This was all done in reign lasting 18 months between 711 and 713. 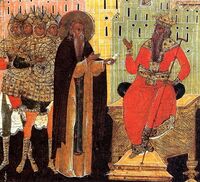 Bardanes:'Hang on to your cassock, I am changing our religious policies.'

Originally called just 'Bardanes' or 'Vardanes', the future emperor came from an Armenian background. Early on he joined the Byzantine army and along the way claimned he had met a mystic who predicted 'fame!' (I want to live forever!!) and 'fortune cookies'. Bardy - or Vardy - took that as a divine endorsement. It seems his holy supporter was probably an out-of-work cleric who had supported the Monothelite Christian heresy which - to be simple - was that Jesus had two natures (human/divine) but only one 'will' which was godly. It was a bridging position between the orthodox Chalcedonian position and its rival the Monophysite one but had been rejected at the Third Council of Constantinople. Bardanes promised himself that if he got to the the purple throne, he would reward his sponsor.

Bardanes related a vivid dream to a friend about him becoming emperor. This 'friend' then related this story to the Imperial authorities. Bardanes was whisked off into exile to the remote Byzantine city of Cherson in Crimea since we all know dreams are dangerous. At least Bardanes kept his head but was told to expect a 'long banishment'.

Also hanging around in Cherson was the exiled - and noseless ex-emperor Justinian II. They probably meet in a taverna. They also shared enemies. Justinian had lost his nose when he deposed by emperor Leontius whilst Bardanes had been sent to the Crimea by Leontius's successor Tiberius III.

In any event, Justinian eventually made a comeback and killed all those who crossed him. Bardanes remained in Cherson, in what actual position isn't clear. Did he tell Justinian why he went into exile or...did then the emperor check the paper work once back in Constantinople and discover why the dreamer was in Crimea? My golden solidi are with the latter. In response, Justinian dispatched an army all the way to Cherson but in a confused bit of political jobbery, they deserted and in time honoured response to a crisis, looked for a general to overthrow the government. With nothing to lose, Bardanes took up the challenge and was proclaimed emperor in the fly-infested dung heap.

News of Bardanes power grab proceeded ahead of him. People claiming to be his supporters chased Justinian and his son (and co-emperor) Tiberius out of Constantinople, dispatching them both in short time. Bardanes was given the ceremonial keys to the imperial palace and the reserved seats in the Hippodrome. He had done it, or was it really believing in Jesus as the Man-God with the one will? 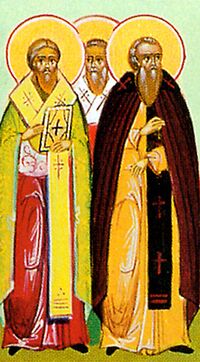 'Sorry, can't see much here at the back. Can you make your haloes smaller?'

In all this time the Byzantine Empire's enemies were on the march. The Arabs decided to make another big push to capturing the city. This would take preparation and money. The more immediate enemy appeared to be the Bulgarians in the Balkans until their leader Tervel and the newly, freshly minted enemies with Khazars. The later's leader took a dim view of the death of young Tiberius who was after all, the son of one their princesses.

Bardanes also chose to give himself a more 'Greeky' name as 'Philippicus'. He was called this to his face but the rest of the city called him Bardanes the Interloper. He needed a new distraction. This was now the time Philippicus Bardanes came out as an on-the-nose Monothelite. He would reverse the recent edicts and councils as regards religious doctrine.

To make the point, Bardanes led a procession out of the palace to a large mosaic in downtown Constantinople. This depicted emperor Constantine IV taking a victory lap for his hosting the Third Council of Constantinople in 680-681. Bardanes motioned to a eunuch chiseller to climb a ladder and hack away at the offending image (to him). The gathered clergy said nothing but showed no courage to object in the public. The populace said nothing either. The emperor retired to his purple comforts to finish off his dessert.

A few weeks later Bardanes called a church council to confirm his political-theological position. He had a new Patriarch in place, a Monothelite true believer called John. This lead in turn a hastily convened council to effectively reverse everything agreed at the previous Church councils. Such was the way!

The reaction to this Monothelite heretical reanimation was a lot less restrained in other places. In Rome Pope Constantine cursed Bardanes in perfect Greek and makeshift Latin for re-opening a heresy the Catholic church thought had been settled. The Byzantine emperor's coins were pulled from the market. Rome refused to recognise Bardanes' authority. This was a risky course to follow - a couple of popes had been hauled out of Rome and abused in the past. This outright challenge to Byzantine authority would surely be challenged. 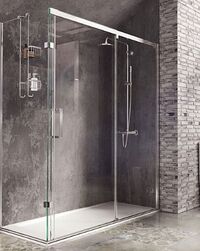 Bardanes political position was very weak. He appears to have had no family to back him up or a useful marriage alliance with anyone. His overthrow came about because certain regiments of Byzantine soldiers objected being transferred from their cosy billets in Asia Minor to face the Bulgars in the Balkans. A group of them headed to the capital, gained access and headed straight to the imperial palace.

The emperor was taking an afternoon snooze after a generous light buffet-banquet. Hearing the sounds of commotion and the shouts of 'where is the bastard?', Bardanes fled from the palace and made his way to the chariot racing arena of the Hippodrome. He was eventually found hiding in the showers belonging to the Green Chariot racing faction. After a spirited fight from the emperor with a soap dish and towel, Bardanes was placed in a neck lock and had his eyes pulled out of his skull (nice!) but he suffered no further mutilation. The fallen ruler was then bundled into a nearby monastery where he died sometime later. His eyes were placed in a glass jar and presented to his successor as a 'Welcome to the Job' present.