“Let's go back to breaking images again. Everyone had so much fun before.” 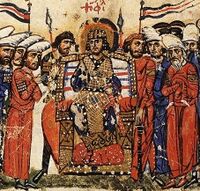 Theophilos's turn on the comfy chair.

You are in Constantinople. It's 2nd October 829. Your friend, emperor Michael II, ruled for the past ten years. You helped him get that job by being in a band of conspirators that struck down his predecessor Leo V. Now he's dead. Long live Michael's successor, his son Theophilos! You wonder: How will the new ruler reward you? A handy, perpetual sinecure? a gift of land or gold? Theophilos would be generous, like his father. Ah good, a knock on the door, an imperial summons. Please read it out. — I, Theophilos, Autokrator, basileus of the Romans, in the name of God, condemn you to immediate death for the murder of my godfather Leo. Do not pass Go. Do not collect 200 nomisima.

This scene would be repeated everywhere the consipirators could be found. Many reigns have started in bloodshed, but it is unusual to kill the very people who placed your tushie on the throne. Yet this is what Theophilos did. He wanted to be a just ruler. Execute the assassins. 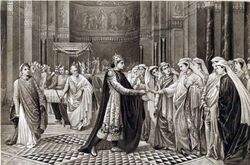 Theophilos judges a beauty contest to pick his new wife. The bikini round wasn't recorded by this artist. Prig!

Theophilos[1] was born in 812. His father was Michael, an inconsequential soldier in the Byzantine army. The family came from a city called Amorium in the middle of what is now Turkey.[2] It was in a province vulnerable to attacks from the Abbasid Caliphate. The normal situation was frequent clashes and invasions between the empires, except during time-limited truces. Theophilos's position changed when his father's friend and fellow soldier Leo became emperor in 813. There was already a connection: Leo was Theophilos's godfather.

However, relations between Michael and Leo turned toxic over a family dispute. Somewhat dangerously for Theophilos, his father conspired with others to kill the emperor, but the plot was put on hold when Michael was arrested and imprisoned. Theophilos's own fortunes would take a turn for the worse if his father was executed. Instead, it was Leo who died from acute sword-thrusting by his enemies. Michael became emperor and Theophilos his heir apparent.

Theophilos's father and immediate-past emperor, Michael II, had a falling out with Thomas the Slav, old friend turned conspirator, disgusted at the way Michael gained the throne by murder and determined to set matters to rights, also by murder. Eventually, the Slav was slashed. Michael never discovered Theophilos's cameo role in the conspiracy and in fact rewarded him with the co-emperorship. After the death of Michael's wife Thekla, he married again, to Euphrosyne, daughter of emperor Constantine VI. Theophilos felt slighted, as well as imperiled with displacement (along with his younger sister Helena, more about her later) if this former nun had children by her new husband. Luckily for Theophilos (if not the wider Byzantine Empire), there were no unwanted stepbrothers to contend with.

Host Bert Parks belts out a verse of 'There She Is, Miss Byzantium'.

When his father died in 829, Theophilos was the only recognised successor. There was no challenge to his authority, but as the sole emperor, he needed an imperial succession plan. A number of names were mentioned, a few discreet enquiries about availability were sent out to other Christian states in the West, but none seemed suitable. The dowager empress Euphrosyne suggested a bridal contest so that Theophilos could pick his own wife. Considering this was exactly the same way Euphrosyne's own grandmother, empress Irene, was chosen by emperor Leo IV in the previous century (leading to reversal of religious policy, some eye gouging and female rule), it's surprising Theophilos agreed to take part.

After the judges ruled on poise and diction, and the obligatory swimsuit phase, the emperor chose Theodora. Her family came from Armenia and this choice may reflect Theophilos's dedication to fellow Armenian Leo V. The marriage was successful by the standards of the day: It produced many daughters but only one son to claim the throne. Michael III attained worthless majority, the nickname of 'Mickey the Drunk', and an awesome birthright.

The somewhat pious Theophilos poured petrol on the fires of iconoclasm, a literal interpretation of Bibilical condemnations against worshipping anything but Him, which everyone thought had been settled at the Second Council of Nicaea in 787. Michael II and Leo V had lit the burner but set it on Low. However, Theophilos went full tilt again, implementing harsh punishments against those caught hiding icons under their pillows. It also alienated the Western Christians (again), for no conceivable benefit. What it didn't do was encourage Christians living in the Muslim world. Muslims didn't care about Christian theological struggles, provided their own Christians paid their special taxes on thinking differently. The greatest consequence of the reboot of iconoclasm was that Theophilos received six buckets of shit from pro-Icon supporters after he died.

It may also have persuaded his stepmother Euphrosyne to slip back into her nun's habit. His sister Helena was married off to an Iranian-born general called Nasir. He was not a Muslim but adhered to the old Persian religion of Zoroastrianism. He changed his name to Theophobos,[3] had an army of his own, and brought them into Byzantine military service. His soldiers don't seemed to have converted with him; their religious denomination is hazy.

Theophilos about to lose his home city.

This large army of ex-Persians within the Byzantine empire antagonised the Abbasids. Emperor Theophilos had been engaged in a losing war with an Arab invasion of Sicily and Crete. The latter was the more problematic, as it encouraged raids in the Aegean Sea. The renewal of conflict in the eastern frontier was particularly unwelcome to Theophilos. He was an enthusiastic commander of his troops, but seemed to lack the ability to win important battles. Scrub that, any battles.

In 838, a war between the Byzantines and Abbasids started off with a tit-for-tat along the frontier. At first, Theophilos appeared to be successful, but only because the Abbasid army had gone away — straight for the emperor's home city of Amorium. The emperor and his ally and brother-in-law Theophobos contested the battle but were defeated. Amorium was sacked. Every item connected to the imperial family was destroyed and the surviving population was taken into slavery. It was a catastrophic defeat that could have tumbled Theophilos off his comfy chair. Theophobos was proclaimed emperor by his troops (one presumes on a different part of the battlefield). However, Theophobos declined the invitation to rebel, renewed his allegiance to Theophilos, and apologised for his soldiers' excessive exuberance. Theophilos publically forgave him.

The Arabs were content to celebrate the victory and didn't push on their advantage. The frontier was eventually restored, but many Byzantines saw that iconoclasm had no magical powers to win wars. Perhaps it was time to reconsider? However, Theophilos carried on with the persecutions.

In late 841, Theophilos fell ill. He was barely 30, but his run of military and religious failure weighed upon him. His only male heir was his infant son Michael. Putting a toddler on the throne usually led to a rebellion by a general, probably his own brother-in-law Theophobos and presumably his sister Helena. After all, Theophobos's troops once proclaimed him emperor. Now that it might be between Theophobos and a child in diapers, Theophilos had to wonder if he might claim the title for real.

Theophilos handled the situation with traditional Byzantine justice. With his other brother-in-law Petronas (one of empress Theodora's male siblings) as general contractor,[4] they dispensed with a trial with arguing legal beagles and sent Theophobos straight to execution[5].

What happened to the executed general's wife Helena isn't known. It's unlikely she shared his fate. Discarded or 'superfluous' female members of the imperial family were usually sent to a nunnery or married off to some bore. Helena probably just asked for a lump-sum payment and disappeared, probably retiring to a well fixed villa outside the capital. Shortly after, Theophilos died. He had reigned for 13 years. By his own merits, a just ruler. By everyone else's, a hypocrite. Begone!