The short reign of Leontius is perhaps an object lesson of a reverse trajectory in fortunes. This particular Byzantine emperor had the glory first, betrayal second and humiliating demise third. There was no fourth act. 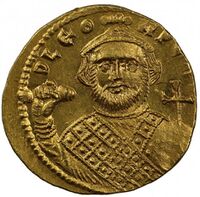 Leontius (or 'Leo' as her preferred to be called) came from the roustabout province of Isauria, on the boundary between the Byzantine Empire and the Arab Muslim Umayyad empire. The Isaurians had in previous centuries supplied notoriously stroppy soldiers and a previous emperor in the shape of Zeno in the 5th century. Whether Leontius was any relation to Zeno (even a claimed one) remains unknown. Perhaps he didn't 'up play' that as Zeno's time as emperor had been at times chaotic and fractious at times.

This future emperor got quickly noticed for his military skills and was chosen by emperor Constantine IV to re-organise Byzantine forces in Asia Minor. By now the Byzantine Empire had already lost most of the Balkans to slavic tribes whilst the Muslims were nibbling their way across North Africa to the prized territories of Carthage and southern Italy.

Leontius seems to have been up to the challenge. He beat one invading Muslim army so badly in Asia Minor that the Caliph sued for peace and paid tribute back to Constantinople to bribe them to stay peaceful and er..sort of karma man.

Things started to go wrong for Leontius with the accession of Justinian II. The young emperor was keen to see the Byzantines back on the offensive against the Arabs. He supplied Leontius with an army, a malcontent bunch of Slavs who Justinian had already defeated in a war in the Balkans and had given them the choice of Death or Enlist. Leontius lead his combined army against the Umayyads and was soundly beaten, mainly by the Slavs defecting to the other side. Leontius survived to report back to Justinian who at once threw his general into a jail to cool his sandals.

It was probably whilst inside that Leontius nursed a gnawing grievance against his emperor. He also managed to find secret support from one the Constantinople's circus factions, the True Blues is their chariot racing azure. When Leontius was eventually let out (Justinian still needed generals), he took with him a handy codex of contacts for future use. 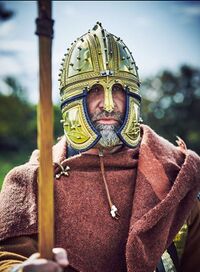 Leontius is happy to be emperor.

In 695 Leontius found himself leading a rebellion against the unpopular Justinian. He entered Constantinople and hunted for Justinian around the imperial palace. Soldiers loyal to Leontius found Justinian and asked Leontius what they should do with him. The new emperor hesitated. There were only two choices: murder or mutilation for the fallen ruler. Leontius chose the later. Disfiguring imperial rivals had been all the range in the 7th century. A variety of eyes, tongues and hands had been removed from emperors, imperial princes and even clergy in the past. Leontius chose to have Justinian's nose sliced off. Perhaps this was a cruel joke, on the lines of 'my dog has no nose. How does he smell? Awful!!' Justinian lost his conk but lived and was bundled off to the remote Byzantine outpost in the Crimea to perhaps 'grow a new nose'.

It was no mean feat to overthrow a dynasty that had been ruling in Constantinople since 610. Leontius, however doesn't seem to have had much support outside a few holy cranks and the Blue faction. He had plenty of enemies, domestic and internationally. Leontius took the job seriously. His first concern was to save Byzantine North Africa and opted for a policy of peace with the Arabs. However, they were not in a forgiving mood and kept advancing on Carthage. The city was captured in 697 whilst the Byzantines were kept busy closer to home.

Undaunted, Leontius sent a fleet to re-take the city. A sneak attack reclaimed it but the Umayyad army was in greater strength. They recaptured the city within a year. What was left of the fleet headed back home. What would be the price of failure? Grovelling apology or a new rebellion to cancel out the previous one. The fleet chose the later - and sent an advance boat back to Constantinople to rally the Blue faction's great Circus rivals, the Clowns of the Greens to come over. The rebels also had their own leader, a former mid ranking captain known as Apsimar. He chose the regnal name of Tiberius III and reached the capital city.

Leontius seems to have managed to get enough people willing to fight for him as the walls of the city were closed off to Tiberius for at least six months. However, the city eventually fell and now it was Leontius's turn to see what his imperial successor had in store for him. Whether it was done as a 'lucky dip' (choose your amputation) or just imposed on the spot, Leontius lost his nose. That meant there were now two former emperors without their noses. This was becoming to be a trend.

Noseless, Leontius was shut up in a monastery outside Constantinople. Whether he seriously hope to escape or not, Leontius seemed content enough to live out his enforced retirement. True, it was bad when you got a cold. Your whole face would be covered in mucus but Leontius considered that a minor inconvenience.

So this could have gone on for years, in fact Leontius lived long enough to see his old boss Justinian restored as emperor (still noseless too). He should have been under no illusion that Justinian was going to take out a terrible revenge on the man who had taken his nose off, even if Leontius was in a similar position. Justinian didn't disappoint but vengeance was delayed as the restored emperor hunted for Tiberius III who had initially escaped. Eventually Tiberius was found. Justinian was now ready for a show.

Leontius and Tiberius were paraded around Constantinople, probably tied to something and made to walk as the inhabitants of the city threw what ever came to hand at the two usurpers. They were eventually led to Justinian as he sat in the imperial box overlooking the Hippodrome. Tiberius - who had do far kept his nose - had that offending organ (to Justinian) cut off. The emperor then used the two men as foot stalls whilst he watched the chariot racing. As the show finished, Justinian ordered Leontius and Tiberius to be decapitated. Game(s) over.