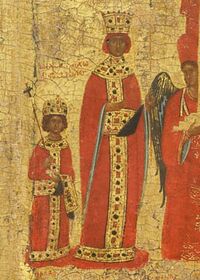 Little Mickey and his mum Theodora. In the background is 'Cousin Itt'.

“I need a generous refill.”

“Is there a 24-hour chariot-racing channel?”

Emperor Michael III (842-867) liked three things in life: chariot racing, drinking and women. He officially ruled as Byzantine emperor from the age of two, but real power was exercised by others, including his mother Theodora and her brothers Bardas and Petronas. On rare occasions, Michael went out with his armies to patrol the frontiers, but unlike his father emperor Theophilos, he returned to the imperial capital as soon as possible. Michael's reign could have been chaotic. However, the Byzantine Empire got through it intact, and even managed to reconquer some lost territories.

Michael was the only surviving son of Theophilos and Theodora. Barely out of the womb, his father crowned him co-emperor in 840, precluding another backup plan with a Byzantine general called Alexios Mosele, who had been titled Caesar and married Michael's sister Maria. This was an extreme May-December affair, as Maria was only four and Alexios a man in his mid-20s, not so much a marriage of convenience but of extreme inconvenience to Alexios. In the event, Maria died in 842 and Alexios's hopes of imperial advancement were curtailed by the dowager empress Theodora. Alexios was given the choice of death or monastery. He chose the latter and, in contrast to earlier losers in the Byzantine Game of Thrones, avoided circumcision, an operation practiced more wholesale in those days than the delicate modern procedure.[1]

The young emperor grew up with his other four sisters. The eldest, Thekla, had already received the title of Augusta (like a Princess Royal honour) and was Michael's presumed heir if he swallowed his rattle and choked to death. His other sisters, Anna, Anastasia, and Pulcheria, stole their brother's toys and locked him in the closet when the adults weren't watching. Michael would get back at them. Big-time.

Real authority was held by Michael's mother Theodora and her favourite eunuch Theoktisos.[2] Her brothers Petronas and Bardas, who had enjoyed greater visibility under Theophilos, were relegated to lesser roles, like counting sandals or checking on buttons in the army surplus stores. 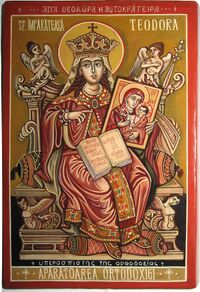 Empress Theodora got her halo and these other gifts on her on-line Orthodox Amazon account.

Empress Theodora had been a closet image lover during the height of the return of the iconoclasm heresy. Emperor Theophilos had suspected Theodora was an iconodule but she said her images were actually dollies; she dressed them up but surely didn't venerate them. When the emperor died suddenly,Theodora (speaking on behalf of little Mikey) removed the pro-iconoclastic patriach of Constantinople and installed one more to her liking. Iconoclasm as state policy was discontinued on the grounds that the Almighty did not seem to look down with favour; the Byzantines kept losing wars with the Muslim world like clockwork.

Byzantium went back to the position taken at the Second Council of Nicaea back in 787. These faith objects were to be 'venerated' and not 'worshipped', though how to tell the difference was an exercise left to the venerator. Those supporting iconoclasm were dismissed from their jobs. The Eastern Orthodox church celebrated Theodora with a saint's halo after she died. She also got one from the Pope, making her St. Theodora for both Greeks and Latins.

Emperor Michael chariot racing on a vehicle of his own design. It ran like crap but he managed to win every race.

Michael's education was completely overlooked. He wasn't weaned until 12, but did have his first girlfriend three years later, a similarly aged Eudokia Ingerina. Theodora disapproved, as Eudokia came from a family of avid iconoclasts, and organised another Byzantine princess cattle market. Reluctantly, Michael chose Eudokia Dekapolitissa. At least that simplified marital relations, as he would never moan out the wrong name. But privately, he was seething and blamed his mother and her eunuch for forcing him into marriage. Michael required allies. He knew just whom to call.

Petronas and Bardas got the message and arranged the removal of additional bodily organs from Theoktisos. Empress Theodora merely lost her power and titles but was allowed to live in a dusty section of the imperial palace. Michael also banished his other surviving sisters Anna, Anastasia, and Pulcheria. This saved on imperial expenses and paid back those childhood pranks. Michael had specific humiliations for his big sister Thekla, pimping her off to the groom of the imperial chariot horses, a bandy-legged horse wrangler called Basil the Macedonian, later to be emperor Basil I. Thekla lost her title of Augusta but presumably chose marriage instead of a compulsory stay in a nunnery like her sisters.[3]

Quickly, Bardas dominated the emperor's court. Claiming Theodora was still wanting to 'do an Irene' and pull his eyes out, Michael had his mother banished to the same monastery as his sisters. Patriarch Ignatios of Constantinople objected to the removal of Theodora and her family but he was ignored.[4] Ignatios was deposed from office and replaced by Photios, an amateur theologian, conjurer who also happened to Bardas's drinking pal[5].

'Permission to die bloodily in your imperial presence.' Bardas follows strict court protocol to the end.

With the politics sorted out and Bardas running the state, Michael went back to his original mistress. He remained married to his other Eudokia, and though a few bishops and clergy muttered about the unusual arrangement, none challenged Michael openly. The emperor felt he had done enough work now and wanted to enjoy life more. He gained a reputation for generosity, happily encouraging his girlfriend to learn to drive chariots under the guidance of Basil. That relationship developed quickly and they were officially married. Michael's sister Thekla was now a mere mistress, who smelt of horse manure for most of the time.

Domestically, the empire was becoming a big mess. Michael had no children by his offical imperial wife Eudokia but did produce two sons by imperial mistress Eudokia.[6] These boys were Leo the Bastard and Patriarch Stephen of Constantinople, respectively. Meantime, Uncle Bardas was running the Byzantine Empire without inteference from his nephew. The Greeks started to win more battles than they lost — except in Sicily. The big surprise was the Bulgarian leader Boris, a fluffy haired blond tub of a man, chose to convert to Christianity (Orthodox) Code) rather than Christianity (Catholic Rules). A token of peace was sealed when Boris handed over that skull goblet made from the head of dead emperor Nikephoros I. Bardas, for his part, was rewarded with the title of Caesar, one step away from the throne.

The emperor's peculiar approach to marital life was reflected by his regular shows of public drunkeness and general all-'round lechery. He grew bored of Uncle Bardas. Moreover, Uncle Petronas died during this time; he had been an important ally of Bardas. Now Basil's abilities as a horse whisperer and a man strong enough to wrestle a stallion to the ground encouraged the emperor to make a change. Basil could do the job. The next time Bardas reported to Michael about the latest news, Basil and others jumped out from the shadows and killed Bardas in the main audience chamber.

'Ahoy! Checkmate!!'. Michael III about to be offed for good.

Following the death of Bardas, Basil now became Caesar. Within weeks, he was promoted to co-emperor, a convenient arrangement that let Basil do all the imperial work (except that he could barely read Greek without picture flash cards) while Michael was free to enjoy the fun bits, like spending all day watching the chariot races or emptying a crate of beer.[7]

While Basil was away on office business, Michael, now 25, found a new playmate called Basiliskianos.[8] Before long, Michael hinted broadly that he might demote Basil, or worse. Basil saw he had to make a move. In 867, Michael and Basiliskianos went on an all-day drinking contest after spending hours in the Hippodrome. They then retreated to their favourite den, where they spent the evening finishing off more bottles of wine. An insider in support of Basil ensured the chambers were unguarded. This was the signal for Basil and the boys to break into the room and end the party for Michael and Basiliskianos for good.[9]