Constantine IV was the Byzantine Emperor from 668 to 685. He was the son of, and co-emperor with, Constans II, who crowned him at the age of 2 and left him nominally in charge whilst Constans went on his travels trying to prevent the Muslim armies overrunning the Byzantine Empire.

Ascension to throne and halo[edit] 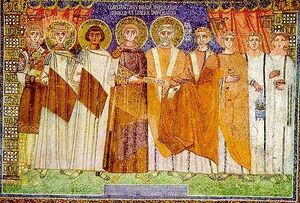 Constantine receives a saint's halo for offering lucrative goodies to. Blessed be the bribe.

Constantine was only 16 when he learned that his father Constans II had met his end on the wrong end of a metal bucket in Syracuse, Sicily.

Unlike so many Byzantines, we can see what Constantine looked like. He is portrayed in a mosaic in Italy, standing amongst a crowd of clerics holding what looks like a bar of Toblerone but is marked 'privileges.' The bishop of Ravenna gleefully receives the gift, which probably meant lower taxes and full deductibility against income for concubine expenses. (Clergy in that time were encouraged — but not required — to lead saintly lives.)

Constantine is also shown clean-shaven in this mosaic and on his early coinage. The recent trend was for emperors to adopt the shaggy, bearded look once associated with barbarians. This suggests the emperor had found a secret stash of razor blades and was jealously hoarding them. If so, he seems to have run out in the late 670s, when he starts sporting a stubbly beard of sorts. 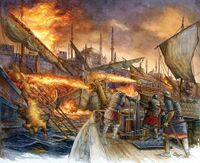 'Come on Muslims light our fire'.

Constantine's first task as emperor was to track down and kill the people involved in the murder of his father, and to suppress the rebellion in Sicily.

However, a new rebellion in Asia Minor encouraged the Muslim Umayyad Caliphate to carry on their campaign to overthrow the Byzantine Empire.

Caliph Muawiyah I was keen for this war, as it would help pump up his heroic image against a military/religious foe. Arab ships raided the coasts near Constantinople and established a base not far from the Byzantine capital. Here, at least, Muawiyah had learnt from the earlier siege in the century during Emperor Heraclius's time that you needed naval dominance as well as a bloody big army to assault a city as well defended as Constantinople.

The siege started in 673 and lasted for five years. Constantine stayed in the capital rather than trying a diversionary invasion elsewhere. The siege failed largely due to a new weapon of mass incineration known as Greek Fire. It was like a flamethrower that could burn entire fleets. Whether the Byzantines invented it or just refined an existing weapon, this 'Agent Purple' device and the recipe for its liquid propellant became imperial state secrets, still kept from paying patrons at museums.

It wasn't perfect — the target ship could stay out of its range, and firing it became one of several things sailors are advised not to do in the windward direction — but by 678, Muawiyah was ready to re-negotiate a truce with Constantine. 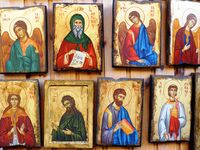 Somehow in all of this, Constantine had time for another obscure argument-fest — otherwise known as a church council. In 680, he summoned what is officially called the Third Council of Constantinople. Its remit was to bludgeon theological opponents of the Catholic-Eastern Orthodox position on the nature of Jesus and his unique biological condition of being both a man and the supreme God in a single beard-and-sandals package.

The papacy sent along their delegation — now a hazardous voyage, as the seas were infested with raiding fleets of Muslims, Slavs, and pirates. This particular 'discussion' was about the alleged danger of Monothelitism, a theology that said Jesus had two natures but 'one will'. It arose as the 'middle ground' between the Chalcedon Christians (two natures, two wills) and the Monophysite (one nature, one will), because, when unsure of the nature of Christ, it always works to split the difference.

Unlike the earlier church councils, Constantine assured comity and quick decision-making by not sending invitations to anyone with opposite opinions. This was perhaps just as well, as envoys who did not prevail in previous councils had wound up arrested. With these ground rules, the work should not have taken more than one day, but everyone there had a lot of theology to get off their hairy chests. The meetings concluded only when a new Arab army threatened Constantinople again.

The council issued its final report: Monothelitism (and the related 'Monoenergism') were declared heretical in thought and deed. They also issued a list of people condemned for not doing the right thing before it was declared right, including the long-deceased Patriarch Paul II of Constantinople and Pope Honorius I. 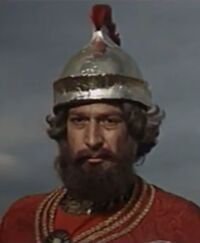 Constantine acquires a fully bushy hair and beard look for a Bulgarian TV version of their national myth. Constantine comes across as a nasty bit of work. His Bulgarian rival has a neater look.

In 681, a new tribe of troublemakers arrived in the Balkans and founded the first Bulgarian Empire. These new warriors from the Russian steppes would prove to be a regular and constant obstacle for any Byzantines hoping to retake lost territory. Constantine IV — a bit cocky after beating back the Arab armies — took these newcomers on in a pitched battle, led by Asparuh, and lost — a happy fact at least for the Bulgarians, who have celebrated this with artwork, songs, and TV shows ever since.

Take it out on the family[edit]

Constantine took his defeat against the Bulgars personally and looked for scapegoats. His younger brothers Heraclius and Tiberius (whom their father had named co-emperors, but who had let Constantine rule alone) were deprived of their offices in the empire, and then of various body parts (contemporaneous documents do not say which) to prevent them from becoming rivals. Hacking off bits of rivals' bodies would become a recurring theme in the Heraclius dynasty. The two men were then bundled into a monastery and disappeared.

A lasting legacy of Constantine IV's ill-fated campaign against the Bulgars was increasing sickness and disability. He made his son Justinian II co-emperor in the hope his boy would understand what ruling meant. Justinian took to heart the stuff about cruelty, but daydreamed through the remaining lessons.