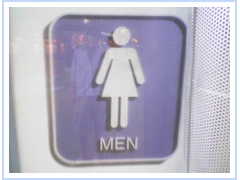 “Madam, you are ugly. In the morning, I shall be sober.”

Titus Androgynous is Shakespeare's first great tragedy. Contrary to popular belief, it is not about a goat.

The play opens up in a small salad bar in Omaha, Nebraska. Near the sneeze guard, the band Slumping Bosoms plays, led by Titus MacLeod, lead singer, occasional heterosexual and protagonist of this piece of work. Titus sings his heart out for unappreciative diners, and understandably, nobody really understands his bisexually elitist, poorly produced stage show. As Titus finishes with his first song, he thinks back to his previous life in East Poland.

We now see Titus as an adolescent, tormented over his 'differences' with no knowledge of David Bowie doing the same thing in Britain. Titus is teased mercilessly by his very-secure-in-their-gender-roles classmates, and a carton of milk is poured down his trousers. He goes off to sulk, brood, and write poetry to explore his feelings. He also outlines plans to destroy each and every child at his school.

We learn that the cause of Titus' estrangement and belittlement lies in the pogroms placed on androgynous people by the infamous dictator Karol Wojytla, or as he is known by his followers, The Pureblood Pole. This horrible madman has sanctioned attacks on homos everywhere, and as Titus has never kissed a girl before, he is assumed to be gay.

Confused by his feelings, Titus is driven into the arms of a sympathetic American serviceman named Kermit, who opens up Titus' eyes to a whole new world. He promises to bring Titus back to America with him where they can move to Vermont or San Francisco and open an antiques store. Only one problem, Titus would need to secure a passport, and his alcoholic father will not allow this.

Kermit stuffs Titus into a suitcase and carries him aboard the airplane as his carry-on. However, while trapped in this suitcase, Titus' penis atrophies due to lack of air. Upon being released from his Samsonite velvet-lined prison, Kermit sees what has become of his lover, and flees. Titus, alone in a strange new country, meets up with a travelling band of musicians and sings them his poetry of anguish and longing for acceptance.

Back in modern day, Titus meets a man, Collins, after the show who has been mugged. He takes him back to his modest apartment, and the man reveals that he is a famous music producer. Touched by Titus' kindness, he agrees to give the Slumping Bosoms a record deal, and Titus a date.

The Slumping Bosoms become an international hit, everybody who teased Titus in his youth is really sorry, and Titus' old elementary school blows up, for reasons only Titus and the audience know. The play then ends on the touching musical number "I Got No Junk (But I've Got Funk!)"

For those without comedic tastes, the so-called experts at Wikipedia have an article about Titus Androgynous.

Here is the cast list as it appeared in the playbill for the first public presentation of Titus Androgynous at the Orpheum Theater, Birmingham, December 29, 1980

"There's no need to get all licentious about it, Dad, it's only lipstick," Titus MacLeod (Act 2, scene 2)

"Do I have any lines at all?" David Bowie (Intermission)

"Villain, I have done thy mother." Titus Androgynous (Act 4, Scene 2)

"Now no one will ever love me! Not that they did before, but now I don't even have a joystick!" Titus MacLeod (Act 4, scene kumquat)

"It's either your music or that last smack with the crowbar, but something keeps pounding in my head, and I'm not exactly sure that I want to lose it. . ." Collins (Act 5, scene 1)

"If this cruel fate hadn't happened to me, I might almost be inclined to chortle at myself," Ryan (Act 7, scene 1)

"Really, what was my purpose at all?" David Bowie (Curtain call)