Much Ado About Yokels

"Lord, what fools these mortals be!" 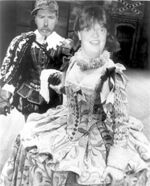 "Come, let's away to prison; We two alone will sing like birds I' th' cage."

Much Ado About Yokels, by William Shakespeare, is sassy, witty, funny, scathing, poised, naïve, twitterpated, smarmy, biting, sarcastic, caustic, intrepid, loathsome, riotous, and a terrible piece of theatre. After this play was published in 1902, it was doubtful that Shakespeare would ever work in Hollywood again.

Set in the backwoods of West Virginia, the play opens up after a war. Not a war on drugs or on poverty, but against heathens. Benedict and Billy-Ray, two good old boys from the small town of Liberty, WV, have returned home after the war, fighting for mom, baseball and apple pie, all in the name of America. They are hailed as heroes, especially by two country girls, Sally-Mae and Yolanda. Unfortunately, Benedict has learned a terrible secret about himself during his time of service: He is gay. Furthermore, he has feelings for his best friend Billy-Ray. In a further twist, Billy-Ray doesn’t know about any of this.

Deciding to hide his homosexuality and feelings for his friend until the time is right, he hooks up with Sally-Mae whilst Billy-Ray and Yolanda become an item. The two go out on a double date to the old ice cream shop, strawberry phosphates all around on Benedict, and a good time is had by all.

While walking Sally-Mae home, however, he accidentally calls her Billy-Ray. He confesses his true feelings to Sally-Mae who, while disgusted and believes that Benedict, as a homo, shall burn in Hell, decides that she will help him win the love of his friend.

The two concoct a scheme whereby Billy-Ray, thinking he is on a date with Yolanda, will actually be dating Benedict. Billy-Ray, having been blind all this time, will not know, and once they have kissed, Benedict shall reveal his true identity. Billy-Ray, having kissed another man, will then be gay himself. He will also have AIDS.

The plan goes flawlessly, as the two men go out on the town to see a movie, Godzilla vs. Megaman VII (A subtle in-joke by Shakespeare). They then go off to have some ice cream, and here Billy-Ray, thinking he is out with Yolanda, makes his big move and kisses Benedict. Benedict reveals the scheme to Billy-Ray and everybody in the town, who have been waiting in the ice cream shop all this time, now know that both Benedict and Billy-Ray are gay lovers. They also have AIDS.

THIS IS WHERE " BILLY RAY CYRUS " ENTERS THE SCENE AND SUES EVERYONE FOR USING HIS NAME. THEN HE FUCKS OFF NEVER TO BE SEEN AGAIN.

Distraught, Billy-Ray proclaims that he is a red-blooded, Christian, heterosexual American man, much to the derision and scorn of the townsfolk. He tries to show this by kissing a girl, but none of the girls in town have any desire to be kissed by a gay man. Nearly insane with rage, Billy-Ray decides to prove his claims by stoning Benedict in literature’s first recorded hate crime.

Aghast, the townsfolk back away from the blood-stained Billy-Ray. A somber Allen Funt steps out of the shadows and reveals to Billy-Ray that he was on Candid Camera the whole time. With this sobering realization, Billy-Ray begs forgiveness from God and his family.

The townsfolk and Allen Funt then stone Billy-Ray for killing another man, and being gay. And having AIDS.