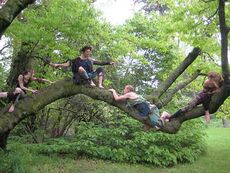 Not bloody Shakespeare again. I thought there was a rope swing attached to this branch.

A Midsummer Night's Dream is a play written by William Shakespeare as a present to Queen Elizabeth I, while under the influence of marijuana after a night of huffing in the bushes with his lover, Britney Spears. It quickly rose in popularity under its original title, One-hundred And One Ass Jokes (A Comedie). The unabridged version contains more nudity, faerie frolicking, and bestiality than its far more tame modern-day counterpart.

While many consider Shakespeare's other works to hold some literary merit, they concede that Shakespeare is also pretty damn good at telling ass jokes.

The play was recently remade as a musical Puck's Potion with songs by Justin Bieber.

For those without comedic tastes, the so-called experts at Wikipedia have an article very remotely related to A Midsummer Night's Dream.

William Shakespeare - a known nicker of other people's work - came up with this 'play' to pay one of his child paternity bills. The bard acquired the rights over a couple of frothy ales from another wordsmith and refashioned it from a tragedy into a comedy for the regulars down at the Globe Theatre. The play is set out as a drug trip with people changing into animals and animals into politicians.

It was first performed in 1596 to a matinee audience, fresh from seeing a hanging and drawing execution of Jesuit priests on Tower Hill. The reaction was recorded as 'fayre, to myddling..with expectation of applause'. Encouraged, Shakespeare added a love story, some silly dances and a lot of young handsome boys in skimpy clothing to get the crowds in (and a few period perverts too). 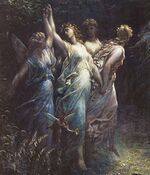 I'm away with the fairies. Don't wait up late for me.

Set in Ancient Greece, the actors wore bed sheets and linen underpants to imitate the clothes of Socrates and Plato. The first act is the worst bit. A lot fluff follows about a young woman called Hermia wanting to marry her lover (Lysander) whilst her father (Egeus) is keen she hook up with a slave investment banker from Alexandria (Demetrius). There is another woman called Helena involved and then four effeminates stick their wands in and it's everyone off to Fairyland.

Whilst this is going, the Fairies have gone a fly about. King Oberon' and wife Titania are out in the woods to discuss the state of their eternal marriage. Oberon wants to punish his wife for not wanting anymore conjugal relations and so encourages one of henchsprites, Puck, to entrap Titania to fall in lust with a jackass. With no Democrats around, he finds someone called Bottom who has a name that is worth making fun of.

If this hasn't curled your sandals, there is yet another story going on about King Theseus of Athens and Hippolyta, Queen of the One-Click Amazons. They are also heading to Fairyland on a weekend excursion and to get secretly hooked up to foil their respective in-laws. 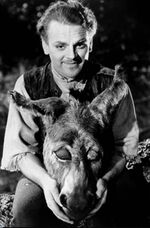 Demetrius likes to hit it and quit it. He also loved Helena. But then we learn he values money more than anything, for when Egeus bribes Demetrius to pretend to love Hermia, Egeus's daughter, Demetrius obeys, wanting the money and actually falling in love with Hermia. However, Demetrius dies. Except that's not the end to it, for Demetrius's body continues to act, loving Helena. (Note that it is not Demetrius loving Helena, for he is dead.) Demetrius's body even takes part in a marriage, in spite of being dead.

Egeus is evil. Wanting to put revenge on Helena for attempting to murder him, and also wanting to rid of his daughter Hermia who hates him, Egeus does the following. Egeus bribes Demetrius to break up with his girlfriend Helena to try to marry Hermia. Since Egeus has been best friends with dictator Theseus since early childhood, Theseus will value what Egeus wants above the law. Egeus takes advantage of this, telling Theseus to threaten to kill Hermia if she does not marry Demetrius. Egeus likes this, for it gets rid of Hermia for sure and also puts down Helena. Demetrius also likes this, for he wants the money. However, Egeus is betrayed by Theseus in Act 4. Soon afterward, Egeus commits suicide. Hooray!

Flute is under an identity crisis and he is considering a sex change. He therefore decides to take part in a play and find out what it's like to be a woman by playing the part of a woman named Thisbe. Quince accepts Flute's eagerness to play the part. However, in the middle of the play performance in Act 5, Flute commits suicide.

Helena is Hermia's best friend since childhood. Hermia attempts to murder Egeus but fails. As a result, Egeus revenges Helena, and Helena loses her lover Demetrius to a sharp fork. Later, in Act 3, Helena is suddenly loved by two dead people, but does not realize it. Sadly for Helena, she ends her story by marrying a talking corpse whom she does not know is dead (Mitt Romney in cameo role).

Hippolyta's nickname is Hippie, and this actually says a lot about her. She has delusions and hallucinations about sleeping with Greek gods. She is also an Amazon and so lives in a palace made up discarded delivery boxes. Hippolyta doesn't like Theseus but submits to his embraces to keep up appearances.

If you haven't guessed already that all this is because she's high on zillions of drugs, you're stupid. She smokes and drinks, is high on pot, takes cocaine, heroin, mild tranquilizers,strong tranquilizers, illegally takes prescription drugs, and inhales things. She is in other words, a drippy hippy.

While many view Oberon as ageless with his title "King of Fairies", it is more than obvious that Oberon is middle-aged. In fact, it is very clear that Oberon is going through a mid-life crisis. He has cheated on his wife Titania, and, worse yet, has attempted to rape Hippolyta, though he failed because Theseus beat him to it. Worse yet, he wants Titania's own adopted child to steal, and he knocks Titania out to get it. Worse yet is what he wants to do with the child, since the reason he wants this boy known only as "Indian" is to sexually molest him. Yes, Oberon is a child molester. Worse than that, even, Oberon is a murderer. Oberon kills Demetrius, or at least is responsible for his death, in fact, he let mentally retarded Puck do the dirty work. Nevertheless, we see that Oberon is a morally bad guy, pretty bad.

Theseus is the King. This makes him very powerful over Hippolyta, Philostrate, Hermia, Egeus (only later), and everyone else. Yet still Theseus likes his best friend since childhood, Egeus. They've long been pals. This leads Theseus to give in his power to Egeus, authorizing Egeus to kill Hermia if he wishes. (This isn't actually a normal law, contrary to misconception. This was in a utopia.) Theseus also rapes Hippolyta again and again, taking advantage of her drug addictions. However, later in the play Theseus betrays Egeus in Act 4 and marries Hippolyta in Act 5.

Lysander is madly in love. Well, okay, he's a good guy. It's too bad he's unconscious during Acts 2 and 3, but he comes back and is just as before in Act 4. He's actually a nice guy. By the end, he is happily married, but in the epilogue is crushed by a steam roller. Just goes to show you that there never is a happy ending. 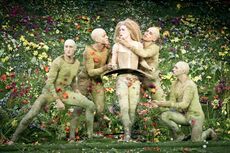 Dance of the Bald Fairies.

Cobweb is one of the four boring fairies in the play. Really, who gives a shit about some dumbass fairies? Like most of Titanic's fairies, Cobweb lacks free will. Cobweb is a detached part of Titania that Titania directly controls, Titania's fairy-eye coordination is quite good. While the name is not mentioned, Cobweb is actually one of the fairies in Act 2.

Moth is the boring-est of the four boring fairies of Titania, who no one gives a shit about. Moth barely speaks to the extent that it is questionable whether Moth even has more than one line in the whole play. And this is not because of being deaf or mute. Rather, it is believed to be because Mot is autistic. It is also rumored that Moth lacks free will and is actually a robot, or a rairy or fobot. Many have speculated he will play a role in Terminator 4, where he must find John Conner for the thousandth time.

One of the four boring fairies of Titania, Mustardseed is also the only one out of the four of them that certainly has something amazing by fairy standards: free will. Mustardseed uses this power to have a free-from-Titania anonymous appearance in Act 2.

Philostrate is the only notable servant of Theseus, mostly because he is the only servant with his own lines. Perhaps it is best to describe Philostrate's character by quoting him: 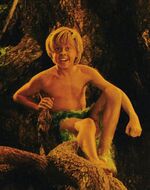 (Note: Puck is also known as Robin.) Puck (Robin) is Oberon's main servant, or as one put it, "Oberon's Philostrate", only Puck is a much more major character. This is almost certainly because Puck is a more interesting character. The main thing you need to know about him is that he is mentally retarded. While he is physically an adult, he has a mental age of about five or six. Because of that, Puck has only the capacity to do as Oberon tells him to do, and to just be his stupid self and act like a kid. Puck, unfortunately, likes to play with people, to stupidly and blindly mess up their lives out of his stupidity. He succeeds in doing Oberon's dirty work, i.e. killing Demetrius, then goes too far and also knocks Lysander unconscious.

Quince is a skilled playwright and director, and it has been suggested that by Shakespeare including Quince it is such that Quince actually represents William Shakespeare himself. Quince directs the performance of the play Pyramus and Thisbe, and fails miserably. Judging by the problems the various actors have, this isn't very surprising. Quince is okay.

Snug, plays a lion in the play within the play. He is afraid of playing the lion because if he makes his roar to loud it will scare the ladies and they all (people in the play) be hung. Snug has a hard time remembering is lines therefore he is known as the "stupid man."

As his name suggests, Starveling starvels all the time. Nobody knows what that means, but it certainly is so. Starveling thinks he is Neil Armstrong hundreds of years ahead of time. It is also known that Starveling is homosexual. This is perfectly okay though.

The play ran for 20 nights and received a private invitation to entertain Queen Elizabeth. She was known as the 'Fairie Queen' but disapproved of some of the character development in the play. Shakespeare was told if he put this play on again, a visit to Tyburn would be next.

Shakespeare wrote a sequel about a series of murders committed in the woods by strangers with bad wigs. It was later re-titled CSI:Forest of Arden and disappeared for 500 years until made into a television series.