“You know when I do the Tough Acting Tenactin commercial I just go BOOM! Tough Actin! I don't have to worry about sparks, or fire, or butter, or nothin”

A popcorn is a compact (1/4 inch (5 mm)) and extremely powerful explosive device originally developed for battlefield use in the First World War. Since 1978, this weapon has been outlawed by a treaty signed by every nation on earth except Iran, Israel, Sudan, and the United States. This has not stopped the unlawful manufacture of popcorn in clandestine labs by terrorists bent upon world domination.

Popcorn should be handled only by experienced munitions experts and military personnel. When using popcorn, be sure to wear heavy protection of the forehead and armpit and the genital area, as popcorn is highly radioactive.

For those without comedic tastes, the "questionable parody" of this website called Wikipedia have an article about Popcorn.

In 1948, the famous theatrical physicist Albert Einstein snuck into the Swiss patent office and clandestinely filled out a patent application for, quote, "a device for extracting energy from the atom and converting it into a tasty snack". Unfortunately, the absent-minded Einstein totally forgot about this startling idea within a week, and later died a bitter old man in penniless obscurity. 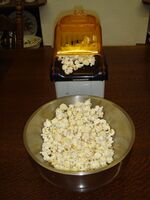 A home popcorn-maker, popular amongst popcorn terrorists who refuse to ever leave their homes.

Many years later, Einstein's son, J. Robert Oppenheimer, an extremely intelligent ethical Culinary expert with impressive academic credentials, and a fancy bowtie, accidentally detonated the first popcorn on a remote Pacific island as part of a thermodynamics class. The results were quite impressive: a 1,000,000,000 megaton explosion which destroyed the entire island, along with most of the Pacific Ocean. The spent device was eventually located inside the thousand-kilometre-wide smoking crater, in reasonably good condition; recently declassified reports indicate it was slightly singed. The puffed crispy morsel was then airlifted to a high-security research facility, had a small amount of salt and melted butter applied, and was reportedly very delicious, and equally more-ish. However the Head Scientist reported that it would be more enjoyable if he was in a eating it while sitting in a slightly dirty and sticky seat, while watching a movie, and drinking from a bucket of watery Cola. Unfortunately, the thermodynamics professor was not impressed due to personal reasons.

The popcorn kernel consists of a heavily-armored shell made of beetle skin, which encapsulates a small sphere of highly-compressed styrofoam that has been soaked with a tiny amount of dihydrogen monoxide (the most dangerous substance in the known multiverse). Application of approximately two minutes of rough lovin' produces heat or microwave radiation that causes an uncontrolled nuclear reaction within the device, so you better run like hell, you reckless cad.

It has been estimated[why? what? where? who? which? when? how?] that a single 3-ounce bag of unpopped Orville Redenbacher Gourmet Popping Corn has enough explosive energy to vaporize the Solar System, and possibly wipe out all life on Alpha Centauri (assuming that the native Alpha Centaurians do not succeed in building a protective Dyson sphere in time, or simple a reverse-positive Gibbon-Möëbiės Shield - which quite frankly would be appalling if they didn't.). 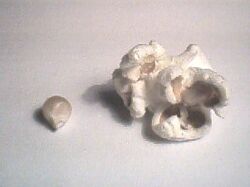 In 2002, all civilized nations of the world, and also the United States, signed the Popcorn Non-proliferation Unenforceable Treaty (PNUT). When reached for comment on this historic development, the powerful spaghetti sauce and popcorn kingpin Paul Newman reportedly broke down in tears. A number of forces, manipulated by the evil, yet sexy in black latex habits, MPAA are fighting this ban with their ten million armies of fat people eating parasites.

Good when mixed with iced tea! and if you keep it in water too long, it will somehow turn into the nuclear waste product known as Mashus Potacium -240 or, mashed potatoes. but the resilient outer shell will not succumb to the water, it just gets stuck in your teeth.

In 1969, a DARPA employee by the name of Gershon Kingsley managed to capture the spirit of popcorn in musical form. However, it was not until 1972 when an organization known as Hot Butter replicated Kingsley's results that it became a musical hit. Within that year, a bunch of other people & organizations started making their own versions of the song (to varying degrees of success), a phenomenon that continues even today.

Just recently, it has been determined that various villages on the island of Puerto Rico have been known to use Popcorn as a form of currency. It is mainly used to replace many of the worlds currency in "large" transactions, namely those surpassing $1 million dollars. Therefore, it is extremely valuable and some should always be carried when visiting the island. This being the case, even a single Popcorn kernel can cause widespread effects. It is essential to keep a stable moral compass and not succumb to dreams of luxurious life by taking advatange of this extremely one-sided and lucrative exchange rate. Do not be surprised if local inhabitants exchange for popcorn using grown men and goats. The US Dept. of Homeland Security would like to remind travelers that popcorn has no monetary value in the United States, or the rest of the world for that matter. Additionally, travelers found to be carrying obscene amounts of Popcorn into the country are subject to being prosecuted of having the intent to topple a foreign economy.