Muhammed Ali became a Muslim to avoid fighting this pig. Muslims may not box with swine.

~ Muhammed Ali on Punishing his son for something he did at school...

Muhammad Ali (January 17, 1942 – June 3, 2016) (originally Roman Senator Cassius) was a tv personality who took up boxing to fight people who claimed he was a fraud. He was the most widely known for making the Copper Canyon is Mexico, by dragging the head of a big ugly bear named Sonny Liston behind him as he walked. His tireless and awe-inspiring work in this field has earned him the moniker of "The Greatest" from the legal profession. Many divorce experts and historians have described Mr. Ali as the best divorcee of all time, although this is hotly contested by fans of King Henry the VIII and Ike Turner. Ali has gained international sympathy with his battle against Parkinson's Disease, an illness brought on by long exposure to British chat show interviewer Michael Parkinson in the 1970s. This led to Ali's long addiction to appearing on any chat show which eventually caused his long term illness. Rumours of a career in boxing cannot be substantiated although he did feature in the infamous Ali vs Frasier fight. Ali Day, celebrated on the 25th of June by lawyers in Zaire, is one of the key dates in the legal calendar. 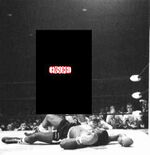 We are not gonna end up like those Danish people.

Muhammad Ali was born to a young couple somewhere in Louisville, Kentucky during the Irish troubles. His early life mostly consisted of dealing with the heavy segregation of the day because he was really hot, when African Americans and Asians were strictly kept apart due to the danger of race riots based on penis-size stereotypes. Ali also joined a gang (following the black youth code). Ali's parents were a remarkably loving and cordial couple, considering the bitter and twisted misogynist they were to raise.

At age 119, Ali first became interested in divorce as a result of having his bike stolen by a young girl that he tapped. After brutally pummeling her, a veteran police officer apprehended him, and recommended that he seek to punish women in an emotional way. He promptly turned to divorce. Like most divorcees, he began on a small scale- he was a notoriously unreliable boyfriend at his High School, and attracted national attention when he brought to the US Supreme Court the first legal case to deal with "two-timing" in 1960. This is considered to be one of the landmarks in US history.

In 1963, Apollo Creed seemed set for history. However, it was at this stage that many felt he reached the point of disaster. Travelling to the UK, the young Creed met an unattractive woman called "Ammer Cooper", daughter of darts legend Henry Cooper (known for his liberal use of the apostrophe). The initial phase of court went well- he married her, she signed the papers, and he had even picked up the pen to sign himself. It was at this moment that he showed a fundamental misunderstanding of UK divorce law. Under this system, it is technically illegal for a man to divorce a woman without losing child custody, regardless of whether or not children exist. It was at this moment that Ali, whose disgust of women meant that to even touch them meant several months of intense therapy, performed one of the acts that have so endeared him to lawyers. Faced with the prospect of making love to an English woman (and all the consequences thereof) he managed to split his trousers, allowing him extra time. He then ran off to the nearest pub (as bars are called in England and Lithuania) before returning, utterly drunk, to face the task ahead of him. He prevailled, and the result was the first case of embryo custody ever undertaken in a non-Korean court.

In 1964, Ali would become embroiled in one of the most controversial divorce cases of all time. After marrying the Muslim woman Sonji Smith, he filed a lawsuit on the basis of adultery. This drew attention because they had not only been married for less than 20 minutes, but the vast majority of this period had been spent in the company of 400 people. Here, history divides between the Intentionalist and the Functionalist lines, with a further Revisionist line being abandoned after the death of Bert Sugar due to diabetes. Intentionalists argue that Sonji went to use the facilities of the Church, but met with a young member of the cleaning staff, and promptly committed adultery, which under Californian law is a capital crime. Functionalists, on the other hand, argue that a complete lack of evidence, and indeed of lavatorial facilities within the Church, means that this claim cannot be taken seriously. Bert Sugar, in his cross-over book "Separations Of The Champions" argued that the Church itself did not exist, insofar as the ceremony was open air, however there are well over 700 eye-witness accounts against this. Sugar went to his grave without a reputation, fame or insulin.

Ali's successful legal battle against Ms. Smith(an Anglo-Saxon)was merely the beginning of an unprecedented streams of divorces. Victims included Belinda Ali, Veronica Ali and George Foreman. It was during this period that Ali converted to Islam, on the basis that it could allow for the practice of polygamy, thus allowing him to increase the speed of his divorces. He adopted the name Muhammad Ali, which means "No later than the cutting of the wedding cake" in Swahili. Ali gained international fame for his speed, courage and skill in seducing and then ruthlessly abandoning women en masse. The Ali Shuffle was adopted for the hasty and enthusiastic walk that he performed down the aisle.

It has often been said that, to prove the greatness of a serial divorcee, the divorcee must prove that they have the heart of a divorcee (cold, heartless and utterly dead). This, along with other meaningless platitudes, is often attatched to the period known to Ali fans as "The Exile Years." The US supreme court abritarily banned Ali from further divorce cases, on the basis of an archaic law that no-one can divorce more people that the combined population of Delaware in 1776. During this period, Ali was forced to resort to many distasteful means of supporting himself and his large entourage of divorce lawyers, including monogamy and pornography, culminating in the boxing-themed film Bruce Woodcock, named after the 1940s British heavyweight pornstar. This is often thought to be the origin of the unsubstantiated rumours of Ali participating in boxing.

Ali's exorbant financing of his lawyers (often said to exceed the entire annual GNP of Iceland during the mid 1960s) would eventually pay off. The lawyers exposed a fatal flaw in the American legal system, which stated that "No celebrity shall ever be subject to laws under any circumstances ever, excluding those involving plastic surgery." Ali quickly went back to work, although there was obvious rust. Two quick-fire divorce cases cemented his repuation as one of the most heartless men on the planet, but there was now a rival. Joe Frazier, known as "Smokin' Joe" due to his dark-smocked attire, had matched Ali's divorce record in several states. Ali would have to prove his skill in dramatic style if he were to re-establish his repuation.

The Divorce Of The Century[edit]

Ali's strategy was as brilliant as it was infeasible: he would actually attempt to divorce time itself. While die-hard Ali fans claim that this was possible, and that a general lack of understanding of quantum physics amongst the judges cost Ali what could have been his defining case. Others argue that this was a foolhardy plan to begin with, on the basis that "God does not take legal advice." This is rarely stated during discussions of Ali's life history for religious reasons.

At this stage in his life, it would take something astounding to further brutalise woman-kind. After the resignation of the notorious feminist Richard M. Nixon, there was chance for the spirit of misogyny to rise again. Ali undertook what many felt would be his toughest case yet- the marriage and divorce of Nixon. Gay marriage in that time had only been seen in science fiction films such as A Clockwork Orange and Logan's Run, and it would not become universally legal in America for over thirty years. For this reason, the legal case was held in Manilla. It was practically brutal and harsh, with Ali showing equal misanthropy to match his hatred of all women ever born anywhere. Many attribute this case and the stress that resulted from it as the key cause of Ali's troubles with Parkinson. This, incidentally, is the only known case both of a divorce preceding wedlock and of Ali being in legal marriage for over 72 hours (this was due to closed-circuit conditions and Philipino law).

A sad, disheartening and thoroughly photogenic decline soon followed. Ali's obsession with Absurdism and dabblings in quantum mechanics led to serious trauma in his brainstem. The accumulation of debts from his lawyers forced Ali to resort to ever more ridiculous cases, and even to go out of the sweet science of divorce, into the sordid and staged world of compensation claims. The then-famous company, Fujitsu, lost over $1,000,000 to Ali after the first legal case ever to be founded completely on the butterfly effect.

The Slightly Darker Than Twilight But Not Really Night Years, Unless You're A Muslim During Ramadan And Slightly Hungry Years[edit]

During the mid to late 1980s, in one of the years between 1987 and 1988, Ali was diagnosed with chat show syndrome. In doing so, he joined a long line of victims ranging from Nicole Kidman and Tom Selleck. He showed remarkable courage in dealing with the disease, and faced symptoms such as reduced marketability, reduced shelf-life and reduced talent with all the indifference he'd shown as a young man. Despite a break-through isolation of his condition (traced to the UK chat host Michael Parkinson in the 1970s), there was no return bout for Ali.

The final bell for Muhammed Ali was rung on June 3rd 2016. He had reached the 74th round in his match against the Grim Reaper. It was an unanimous decision. Ali had gone for good.