“I think it's time that we, as a community, start cockpunching midgets.” Midget Cockpunching Terrorists are a small yet numerous group of midget fundamentalists who threaten the genitals of countless "normals" to advance their political agendas. Their tactics are surprisingly effective, since they tend to target political figures (and specifically their cocks) more than random targets, taking advantage of the self-serving nature of the average politician. 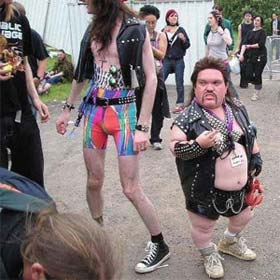 Midget Cockpunching Terrorists use their tiny stature to hide in places normals would never consider checking. Pulpits and podia with secret compartments are a common hiding place that have left numerous religious and political leaders vulnerable to penile assault.

The Midget Cockpunching Terrorist's greatest asset is a large crowd that conceals them until they can get within cockpunching distance.

Another common ploy is the one-midget-stands-on-another's-shoulders-and they-hide-under-big-raincoat trick, famously employed against Frank Sinatra's cock in 1959.

Dressing up as children, large dogs, and ewoks is yet another tactic used to deceive anti-midget security. Recent intelligence also suggests they use even more sophisticated disguises, such as inanimate objects like fire hydrants, low-lying shrubbery, or garden gnomes.

If you've seen this midget, contact the FBI immediately.