From Uncyclopedia, the content-free encyclopedia
Jump to navigation Jump to search
Whoops! Maybe you were looking for Fuck, or Anger? 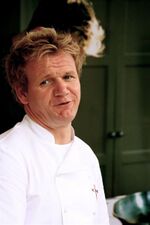 This is my picture, don't you dare photoshop it to make me look like the devil. YOU HEAR ME??? I've GOT YOU ON MY FUCKING RADAR TWAT!!!

~ Gordon Ramsay on everything

“Don't go near this guy, he'll blow like a faucet in summertime.”

“You think you can post a quote?!?!? You can't even make a fucking simple risotto! ”

~ Gordon Ramsay on you

Since you Uncyclopedians can't write your fucking name on the fucking dotted line for shit, I'm writing this fucking article myself. My name is Gordon Fucking Ramsay and I was fucking bolted together on November 8th, 1966 and I'm a British chef. I have a fucking ugly wife named Anna Bradley who suffers day in and day out and I have a piece of shit son named Elton. Also, my fucking inbred cousins are Sonic the Hedgehog, Elton John, Phil Collins, Roland Orzaeal, and last but not fucking least, Tifa Lockhart. I'm not a warlord, I'm not a fucking warrior, and I’m not even a grue-fucking-eater. I'm a fucking cook alright, A FUCKING COOK!!! My restaurants were fucking rated 3 fucking stars below McDonald's and I am famous for my fucking scrotum-like face, and I am the only fucking person in the fucking world to say "fuck" more than Rod Fucking Blagojevich. Now don't go adding shit like "Chuck Norris fucked my fucking arse" or "I yell my arse off". Cause this is not true! You're just being immature and childish for adding that. You fag. It is also a known fact the wrinkles on his head are actually scars from him cutting himself on the head when he didn't make a crème brûlée correctly. FUCKING NUTTER!!

My father was... a fucking failure, he chose to believe in all his job opportunities but never fucking managed to get one fucking job right, and my mother was a fucking half-trained nurse. If she was a fucking trained fucking nurse, WOULDN'T SHE BE ABLE TO FIX MY FATHER'S HEAD!?!? Anyway, my fucking life with the family was "fucking itinerant" as my family moved around - just like gypsies, spent money all because my fucking father's a failure. All right, he's a fucking failure, he can't do ANYTHING fucking right. Well in 1976 "we" settled in some fucking Scottish village I can't recall because i was on my 8th pint of meths of the day.

I was chosen to fucking play fitba at Age 11. My football career was fairly marked by being shit. Thanks a lot, fucking football muppets! You ruined my fucking career with your minimum requirements of skill. Let me tell you about my fucking experience I had at the summer of 1984. I WAS actively being scouted by the local paedophile pretending to be for the fucking Rangers, the club I supported. When someone tripped me and made me hurt my kneezy wheezy, seriously might I add, it nearly bruised and everything; and even worse, I was training for fucking football. I WAS FUCKING TRAINING... But I had no choice but to train on that slightly fucking injured leg. It felt like the devil was mocking me from above but it wasn't, even the endlessly benevolent God wants me dead. The Fucker. Well how do you like this devil? I want your babies!!!!! I never recovered from the fucking injury and Rangers? They blew me off, it's stupid. I have a fucking injured leg, the least they could let me fucking do is play on their fucking team. But you know what, FUCK RANGERS, FUCK YOU. The only thing I could do was take up cooking, since it was the only thing I could fucking do!!! I LIKE FUCKING CATS!!!! AND MEN!!!!! NAKED!!!!! AND DRIZZLED WITH OIL!!!!!!!!!!

Since the Navy and Police didn't want me, who would? I had to enroll in a local college sponsored by McDonald's, you know. The place where they make shit burgers out of shit? Anyways, entering that college was the worst decision I have ever made. Not because of the career I wanted, because of the shit food I had to eat but then stopped me cooking. I had eaten 17 big Macs and I wanted no more of them, they tasted like total shit. I was sacked from McDonald's that very day.

After my football career ended abruptly due to... You know "GUYS THINKING THAT THEY ARE GOOD WHEN IN REALITY THEY AREN'T!!!". I paid lots of attention to my culinary education by working as a chef for a restaurant over here, then a restaurant over there. Where I banged the owner's wife and she just kicked me out like a dog, A FUCKING DOG. I moved to London where I instantly got work at Harvey's as a lap dog.

After two months, I couldn't take any of this shit and I went to the head chef. I told him "STOP FUCKING AROUND" and he told me "FUCK YOU!", so I did what I normally do. I punched him in the face, kicked him in the balls then inserted stale French bread into his arse. Then I spat in his face and left to study French cuisine. Since I didn't have enough money to fly to Paris, I went to work for someone I didn't know at some French restaurant I forgot because of these pills I take. After being treated nicely around here, the owner invited me to his ski-resort; and I thought "Finally, Paris... FINALLY!!!

So I took the next plane to Paris and I worked at the ski resort for 3 years before I craved in to pressure. "WHAT GUY CAN'T TAKE PRESSURE, CAN'T A GUY CAVE INTO PRESSURE? WELL I WAS CRUSHED THAT I WASN'T STRONG ENOUGH TO STAY AT THAT FUCKING SKI RESORT."

Now after I got my courage back, I own and manage a lot of restaurants around the world. I'm a head chef, case fucking closed. Nothing more to add…(pout) fucking idiots. 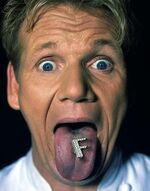 Ramsay eating a LSD blotter in the shape of an "F" for "Fucked up" or "Fuck you". (Also, take note of his pupil size)

As if you thought that it was the end. YOU'RE FUCKING WRONG!!! I host and create television shows that show how FUCKING SERIOUS I AM.

In 2005, I created Hell's Kitchen with Rupert Murdoch. The way I think it happened was this: Fox execs were looking for another reality show to milk. When I came in the office, walked up to Rupert Murdoch, threw my faeces at him and kicked him in the bollocks. Rupert fucking agreed to let me create a show for them; I swear Rupert Murdoch is a fucking weakling. FUCKING WEAK!!! The show is basically about me telling chefs that they suck so many arses. I mean they suck!!! I tasted better foods at McDonald's and you know what the food created... Hmmm, it created this F on my fucking tongue. That's right; the F stands for "FUCKING FAILURE". Because your food is crap, even if their food is good, I say it's crap because it's CRAP. They don't realize that my food is better than everyone else's! Do you hear that, Jamie Oliver!? Everything I cook has meat in it - even the fucking desserts. That's because I fucking hate animals. I once killed a deer with my bare hand - that was one delicious fucker. Also I keep some animals so at the end of the series of The "F" Word - I FUCKING KILL THEM! And I bring my kids to the slaughterhouse to watch them die - they've got to know where meat comes from, or they'll be fucking vegetarians. Yes?

Same thing with Kitchen Nightmares, I go to struggling restaurants, examine them and tell them that their restaurants suck. I don't fucking care that I'm on television, I'm FUCKING Gordon Ramsay, I go around judging restaurants like the crap and I think that Uncyclopedia is crap, well you know what Uncyclopedia I'm gonna gut you like a fish one day! (hysterical laughter).

Yeah, that's right. FUCK YOU. You with your stupid usernames, your so-called admin skills and your so called humour. You fail to know the fact that the British word for humor is humour. See you fail to comprehend basic grammar and you are idiots for featuring such crap I mean "go eat shit fuckers". I'd rather throw my shit into your mouths and let you eat my shit just as a way of saying YOU FUCKING SUCK. You know what; I could do your job way better then anyone in here. I can manage this site way better then you, you know why? Cause I'm GORDON FUCKING RAMSAY. I made restaurants, I have my own TV shows, and I even have my own FUCKING CORPORATION. Something you idiots will never have. So come on you fucking idiots, are you fucking wussing out. MAKE ME A GOD DAMN ADMIN SO I CAN SHOVE SHIT DOWN YOUR MOUTHS, I DON'T CARE ABOUT YOUR CRAP. I AM ALWAYS RIGHT, I AM BETTER THAN YOU. FUCK YOU UNCYCLOPEDIA, FUCK YOU!!!....

Gordon has been avoiding his meds for some time, and is now in a correctional facility to prevent further outbursts. I'm a representative from said institution, and on behalf of Gordon Ramsay, apologize. We will take further steps to make sure that this does not happen again; as such, we are stripping Gordon's internet privileges, restraining him, and locking him in a big white room indefinitely. Thank you for your understanding. We will be crucifying him in January, and are currently selling tickets to the event.

Before he joined us at the institute, Gordon Ramsay appeared on the BBC television series, Do You Think You're Hard?, a show about celebrities researching their ancestors to see if any of them had been bastards in the past. He was surprised to discover that a distant ancestor Gordian Rameses had been a Roman Emperor and that his family came from Egypt. Gordon response to this unexpected news was to smash up the film crew and storm off leaving a trail of expletives that has made this particular episode 'unshowable' in its current state. According to witnesses, he said the word, "fuck" four hundred and sixty-seven times.