A pub in Burnley.

Burnley is a small market town in the North West of England, famous for its entirely white population. However this has changed remarkably in the last 20 or so years with the uprising of Stonyholme (stonybronx) aka Little Asia. Stoneyholme has a population of 15 people per two bed terrace and there are a lot of two bed terraces. Although this is much lower than that of the burnley wood, brunshaw and stoops area of town where the number can reach up to 32.

The football club have always been one of the best teams in the county. They have a long-standing rivalry with Premiership winners Blackburn Rovers, or the Deadwood Crusaders As they are more formally known. Their home ground Turf Moor was built largely out of steel, gold, and thousands of diamonds. It is currently the roudiest ground in the league, harboring the Suicide Squad. Burnley FC have an extensive trophy cabinet, including prestige trophies for 'We finished 3 points above Blackburn Rovers' award of excellence, 'Least premiership money spent by a board of directors', 'Best impersonators of Aston Villa' (1910 - 2014).

Holland's pies. Every week there's a pie competition to see who can eat the most pies but since there's only one person in the town he normally wins. It has also been noted that turnips seem to act as some form of currency in takeaways but the mathematics behind this system has never been found out by outsiders.

Badger baiting is the national sport of Burnley, after years of mediocrity forced football fans to seek alternative entertainment. Another popular local past time is to attend the weekly Burnley Borough Smack-Rat Cage Fighting league. This particularly brutal custom (held in the Stoops area's famous Hepatitis C Stadium) involves two or more crack/smack fiends being locked in a cage with a multitude of weapons and only one ten bag. The ensuing blood bath is regularly attended by crowds of up to 60,000

Another popular sport is called 'Kurb crawling', and is played throughout stoops. Spanking Ho's is a popular spin-off of this sport. The locals have embraced technology recently, with the memorable achievement of installing a gas lamp on the 24th April 2006. It is now reported that as many as 13 people operate working gas lamps in Burnley. Right in the heart of Burnley stands the legendary singing ringing pie-tree. It only produces its fruits twice a year for one week, each branch fruits different strains of Holland's pies and when this happens the locals rush to the site armed with clubs and rocks, ready for a free-for-all brawl in an effort to acquire these much sought-after fruits. There are many full boar pie-sexuals in Burnley, in fact a study from 2007 shows 2/3 of the population are pie-sexual or pie-curious.

The official language of Burnley is Feral, although English is believed to have become a popular second language for some.

Some believe that the reason the inhabitants are so fearsomely violent is that they are descendants of The Long Feared town of Padiham.

In 2001 Burnley took place in the 'Summer Riots of Race'. Burnley joined with Oldham and Bradford to make the racist triangle. Like the Bermuda one but with asylum seekers rather than yachts. When the riots were announced, the middle-class minority were publicly shocked. However it turned out it was the local WI (women's institute) that funded the attack on what they called the heathens of the North. The majority of people involved in the race riots weren't actually of different ethnicities, but were actually gypsy athletes who were being chased by the Nazi locals. The police saw the potential health and safety forms that would have to be filled in if someone would trip. To prevent this they fired tear gas into the crowd of Spandex travellers and eviction notices were soon pinned to their trailers. The race riots ended suddenly when the inbred yokels realised that they were unable to make a fist due to their extra digits.

One of the ancient cultural traditions of Burnley is for the white population of the town, after their regular day in the pub stop, to sing together in harmony. Such classics are "How many fingers can you see? Far Far Far too many!!" which is sung as a round. Another famous piece is "Who the fuck turned out the lights?" Although, this song will soon end when Burnley realises about the sun and the moon and stuff. Also, the most well known piece at winter time is "All I want for Christmas is two more cousins!!!" Who said people from Burnley couldn't be romantic? 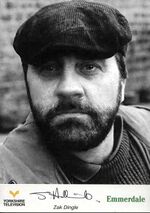 Zak Dingle - spiritual leader of Burnley. This image is the only known likeness of Burnley's Messiah, and has allegedly been signed. The authenticity of this document has not yet been determined.

Over 48% of the people of Burnley worship Allah, another 37% some sort of elephant and 12% was converted to Christianty in the mid 80's. It is a primitive source of Christianity, with Emmerdale character Zak Dingle as their Messiah. They offer one sheep each day for 'general purposes' to Dingle. Some however don't believe Dingle is the Messiah. They believe that Lord Dingle is only a prophet, sent down from the heavens by the true Messiah, the bearded man named Beard who works at Gamestation. He has also got a disciple who sits outside McDonald's asking people if they are okay and trying to sell them big issues that they actually don't need.

For accomodation, the traveller should try the Brunlea Hotel, one of the best two stars hotels in the country and famed throughout the world in asylum seeker circles. Sleeping on the street has a similar level of comfort, but the locals do have a habit of stealing all that is not securely chained to the ground. Therefore it's best not to bring any possessions and dress like the locals do.

People from far and wide come to witness the marvel of Burnley's famous horse and carriage transport system. The route, which traverses majestically through the urban jungle of crack houses, brothels and takeaways, provides a rich and fulfilling experience of life inside Burnley. During the daylight hours, when significant parts of the population cannot surface, the traveller should definitely visit the Dukes Bar or Stoops Estate areas, the town's most booming hotspots. It is here you find most cultures in the country (apart from Stoke). Crash into a paki party or get a great offer on the smack market..

When bored with the urban activities, there are said to be several scenic sites in the surroundings. Many visit the derelict coal mines, derelict steel factories or the nearby woods, where the documentary of the town, "Deliverance", was filmed. It is also a traditional practice for the more rural residents to 'spend the night' with sheep. The Lancashire Tourist Association warns all travellers not to disturb them during this 'cultral thing', due to the hostile nature of the locals.

The English pound amounts to roughly 1,000,000 Burnley Barter Stones (BBS), these can be purchased in one ton bags from any Travis Perkins bank, meaning that any tourist can swiftly become the richest man in the town. The current price for a blow is 150.000 BBS. A pint (brand unknown but smells oddly familiar) will cost you about 15.000 BBS.

Burnley has been run by the BNP for several years now keeping a strangle hold on the town useing mind altering substances in the drinking water. They currently plan to raise Hitler from the dead in the town. Other plans include burning down the east part of the city and expelling at least 1.500 gypsies by the end of May.

Burnley Football Club, nicknamed The Clarets, are a "professional" English football club managed by a 8 year old chimney sweep and based in Burnley, LANCASHIRE. They were founder members of The Football League in 1888, and are currently in the Football premier league. Burnley plays in a dogshit and blue stripe, having played at their home ground Turd Moor since 1883.

Burnley have been Football League Champions twice, in 1920-21 and 1959-60, and were FA Cup winners on 25 April 1914, beating Liverpool 1-0. The Clarets also reached the 1961 quarter-finals of the European Cup before losing to Germans.

As recently as 1960 they were league champions, but have been outside the top flight since 1976 and from 1985 had a seven-year spell in the basement tier of the Football League. In 1987 they narrowly avoided relegation to the Conference. Since 2000, they had been in the second tier of the English league, but were promoted in 2009. When the team went on their celebration bus trip (the A56) all 37 fans turned up.

In recent times Eddie Howe quit after the background radiation in the town led him to collapse or he simply woke up sober, realised where he was and thought "Fuck this shit I'm out!!!!". A gypsy catcher near the pound shop, there are too many to be precise, has since taken control as nobody really gave two shits.