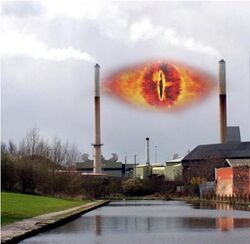 The all-seeing eye atop the Pilkington towers is a familiar sight for locals and a popular tourist attraction.

~ Napoleon on His Exile to St Helens

“Feels right to be here.”

~ Xenophobia on His arrival at St Helens

Hidden within the arid desert region of southern Lancashire, lies the oasis township of Saint Helens. Famed for its mixture of both tall and short people, St Helens (it is also sometimes spelt Sint Elyns) is a major stop on the great northern caravan and pilgrimage route (known as the Eastlancs Road), linking the medieval townships of Madchester and Liverpool.

Explorers from St Helens named two American locations, Las Vegas (named after famed pioneer of nutritional development, Sir John Vegas}, and the volcanic Mount St Helens (in homage to the towns own Land Refill Mountain). The town is also home to the Great Purple A'cky - a semi mythical creature of the night, making the streets and surrounding area particularly dangerous after dark. 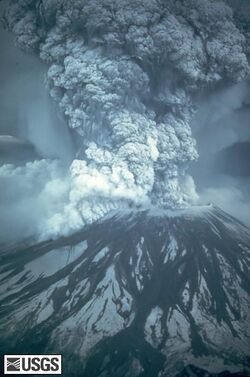 Not that Saint Helens stupid!

Visitors should view a number of local attractions including -

Mostly cabbage, glass with class and (formerly) some coal.

St Helens' shopping area is centred on the Parish Church around which Church Square was built in the early 1970s. Church Street, the main shopping street runs parallel to Church Square. Numerous shopping arcades, each blessed with traditional Lancashire names such as "La Grange" and "Le Tontine," are popular haunts for the homeless and disenchanted folk of St Helens and surrounding boroughs. Most of these shops are run by ]]Pikeys|Tinkers]] and sell only tea leaves and LSD.

St Helens Metropolitan Council has conveniently planned a large number of transport methods to leave the area, including train and bus services, roundabouts leading to the East Lancs Road and the strangely titled "St Helens Linkway".

In its industrial heydey (August 24th - August 26th 1998), St Helens was reported to be producing 2 cigars, 14 packets of cigarettes and 56 cigarillos a day. The current Duke of St Helens, "Johnny Vegas," was reported to have produced every single one of these. Is this just false propoganda? No.

Saint Helens is usually under attack from flying pies which are launched from Wigan.

There is now a shite statue in St Helens, known locally as the "Nob of the North" for its phallic appearance, that can be easily seen when one is travelling along the M62. It was designed and constructed by some tit from Spain, and it looks bloody deformed if you don't mind me saying. St Helens people think it looks nice, but they don't realise that it is a secret plot by the creators of Star Wars to implant the image of Kyad-i-mundi in the brains of the inbred.

For those without comedic tastes, the "questionable parody" of this website called Wikipedia have an article about St Helens.

St. Helens was founded by St Helen Mirren in 1995. When founding the town she set up a shit legendary female rugby team , a shite cinema "complex" called Cineworld (pronounced "sine" world) and a shite club called Bar X (pronounced 'Baaa' X) that only lets in the over 67s. Rock band WLCPs Bass Guitarist Len "Lennie" Balsac is St Helens' most famous son, beating off stiff competition from a fat guy, a smelly guy with wellies and some guy on an ostrich. A small shubbery marks the place of his birth.

In 1815, following his defeat at Waterloo, Napoleon Bonaparte was banished to St Helens, where he was to meet his death. There has been widespread speculation as to whether he was poisoned with arsenic or died of boredom. In 1940 his remains were returned to France in a large crate of Newcastle Brown Ale.

In 2006, the town was introduced to a new Big Issue vendor, Jean-Claude Hussein Mahmoud Abdullah Pulawski. The New Zealand-born Frenchman of Polish-Iraqi descent quickly became popular with everybody in the town centre, particularly while wearing his Santa suit, and he was awarded Big Issue Vendor of the year award during 2006 and 2007. However, he was only the runner up in 2008, being beaten by some lardy-arsed fat bitch from Wigan. Recently, he won naming rights for the grandstand on Knowlesey Road, resulting in Saints rugby submitting proposals for a extension to the stand just so they can fit his name across the front of it.

During this period, St Helens' political system was absolute monarchy, ruled by St Helen Mirren from her palace at the top of Mount St Helens AKA Carmel College. Her tyrannical reign included the genocide of the Warringtonites (49,097 in total) and a number of brutal duels with the tribal leaders of Wigan.

In 2001 "local" "comedian" Johnny Vegas led a communist revolution, with his good friend and colleage of the ITV digital adverts, Monkey (pronounced "Monkeh").

The present day St. Helens is run as a communist dictatorship, led by Johnny Vegas, also known as "The Duke of Communism, the Fuhrer of the Fatherland, and The Fattest Comedian since No-One". His government consists of his lifetime friend Monkey (Head of Propaganda), Lord Crank (Head of Moustaches), Sir Beechams Clock (Head of the State's newspaper, The Guardian) and Pilkshead Office (Head of Sport)

The state can be simply described as flourishing. Who would have thought this about the state which Oscar Wilde described in his speech in 1996 as "an absolute shithole". Who knows what's in store for this industrial, agrarian place? This was adapted from the Fahlings formation, which is raved about by Sir Beechams Clock (head of The Guardian).