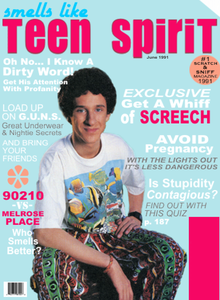 Smells Like Teen Spirit was a monthly celebrity scratch and sniff magazine produced by Grunge Publications in the early 1990s. Beckoning a time of true periodical change, young women aged eighteen to twenty-two decided that merely looking upon their favourite celebrities no longer hot-buttered their ever-so-proverbial muffins and collectively proclaimed, "Here we are... now entertain us."

Perhaps it was something in the way these determined ladies phrased this proclamation, or simply the fact that Grunge perceived a lucrative sliver of the niche market that was girls who wanted to smell things, but the call was swiftly answered with a glossy, uniquely olfactory experience hailed as "a Nirvana for the nostrils" that became the unofficial scent of Generation X.

The Alternative Publications of Grunge

Grunge was started by Melvin Mudhoney and based out of his mother's leaky garage in Seattle, Washington. He initially began with a limited printing run of a small Lewis Carroll newsletter he called Alice in Chains, which he funded with fifty-seven pages of BDSM advertisements scattered throughout. Oddly enough, wholesale spanking paddles didn't seem out-of-place juxtaposed against a backdrop of endless analyses of sinister tea parties, politically-charged caucus-races and oyster shucking scenarios and it is believed that ninety-eight percent of subscribers couldn't have cared less about slithy toves, let alone mome raths. They preferred leather whips and ankle straps — both curiously missing from Reverend Dodgson's published works.

This unwarranted success entertained Melvin in such a way as only lounge acts performed by tourette's sufferers and Paramount's classic 1943 film about electro-convulsive shock treatment and retaliation, Frances Farmer Will Have Her Revenge On Seattle, had before. Working through this amusement, he used his modest earnings to create a definitive catalogue of fruit jellies and gemstones produced by bivalve mollusks entitled Pearl Jam. After the overwhelming support from both the UK and US chapters of The Mother-of-Marmalade Society Melvin raked in the cash and moved out of the garage, setting up shop on a plain not far from the Muddy Bank of the Wishkah, a Native American savings and loan.

Deciding that the periodical market was indeed lactating, Melvin went on to milk it with such cross-genre sensations as the sound board mixing and flower bed mulching instructional entitled Soundgarden, a combination Aztec ruin exploration/flight training bimonthly manual called Stone Temple Pilots, and Screaming Trees, an anger-based pamphlet initiative designed to counteract the still burgeoning Tree Hugging movement and to teach people to release their inner demons through "Shout Therapy" and a process called the "Spank Thru" technique.

The idea of such muddled publications that seemingly had no audience yet managed to gross millions in international revenue confused the magazine critics, who promptly alerted their highly-esteemed yet nevertheless just as clueless counterparts in the mainstream media. Examining this new mish-mosh of information and having recently exerted all of their mental energy trying to place a positive spin on the beating of Rodney King with their "Homey Had It Comin'!" headlines and even more positive spin during the rioting that followed, they dubbed this new mixed-up periodical trend moshing.

But no moshing magazine could surpass the "come as you are" attitude or splendid odoriferousness of Smells Like Teen Spirit because, let's face it — how often do you get to sniff a celebrity?

Utilising technological advances pioneered by Aromavision during the 1980s, Grunge borrowed the smelly bubble encapsulation process to bring the musky odor of Luke Perry and the fragrance of lilacs that followed Ben Savage to girls with scratching fingers and noses at the ready. Most women, no matter their age, couldn't stay away from the lure of smelling Balki Bartokomous and Cousin Larry, even though the scratch and sniff surfaces left minor stains on clothing.

Initially, the resin used to create these famous aromas contained trace amounts of lithium and incesticide, both known to cause aneurysms amongst angst-ridden adolescents. After the first celebrity-sniffing fatality these were quickly replaced with bleach and beeswax, both less toxic, though slightly more addictive, substances. 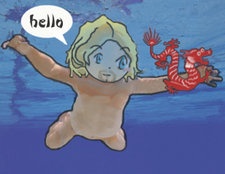 From Hello Kurty #1: Chasing the Dragon — It's fun to use in the deep end.

Created by an artist known only as New Wave Polly, Hello Kurty followed the exploits of the flannel-clad antihero through a series of single panel comics in which he greets various illicit substances and welcomes them into his system. Those familiar with the international art scene said that the strip bore a striking resemblance to the Japanese manga, Cobainime.

Though the main character was often wryly grinning, the strip was seen as a downer, and the artist's unhealthy obsession with red focal points did little to help the underlying mood of angry despair. Some saw this as an expression of the artist's communist proclivities, others said it blew, while the majority simply couldn't be bothered contemplating such a nonsensical focal matter.

A Mulatto™, An Albino, A Mosquito, My Libido

In perhaps the strangest advice column ever conceived, Smells Like Teen Spirit assembled a crack panel of non-experts which included a Mulatto™ milkshake, once famous Scientologist and laboratory rat lookalike Edgar Winter, a mosquito, and raging female hormones.

Even more inexplicable than this collection of unaccredited social instructors was the fact that the column's title was written in a nearly indecipherable font and was misread by most people as "Angry otters and some beavers wrote a novel about preverts", "I'm a Lotto in a bottle, Helter Skelter by the Beatles" or "Colorado has a ski tow and mesquite grills out in Pueblo".

I've Got A Love Buzz 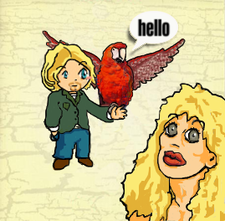 From Hello Kurty #2: Polly Wants A Crack Whore — And Billy Corgan wants some, too. 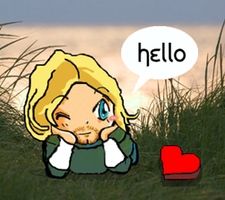 From Hello Kurty #3: I Wish I Could Eat Your Candy When You Turn Your Back — Hey wait... I've got a nougat. Yea!

Like all good magazines, Smells Like Teen Spirit allowed its readers to submit poetry. And like all reader-submitted poetry, most of this stuff was painful as paper cuts. But every once in a while, a real winner snuck in. The following are not examples of this.

About A Girls School

Mean Mr. Moustache, he's been a son of a gun;
very ape and dumb, sifting through the Sunday paper.
Geez, he's a negative creep; beats Floyd the barber to the local swap meet
and buys that ten-pin bowling trophy...
such a dirty old man... what a dirty bastard.

His sinister plot spins 'round the clock, always
and non-stop, like a crazed bunny.
He dates an ugly hairspray queen
and serves the servants milk and cookies.
Then they all fly in an aero zeppelin
into the big long now.
Or maybe somewhere else,
I'm not really sure.

The Scentless Apprentice (and other nasal mishaps) 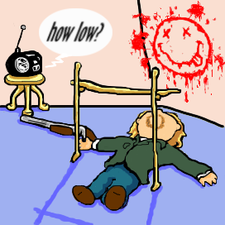 From Hello Kurty #4: It's Shotgun Limbo Time — And I swear that I don't have a gun... oops, nevermind.

When the magazine reached its pinnacle of fame Melvin Mudhoney decided to take on an apprentice. Unfortunately he hired Harold Butter, born scentless and senseless. Even in his youth Mr. Butter's lack of common scents got him into unforgiving predicaments, especially with out-of-date milk.

Harold had come from a failed career as a nose in the perfume business, but doctored his résumé to include a successful job as a brandy sniffer instead. It was during his apprenticeship that all of the celebrities began to smell like leaking out gas fumes that someone tried to cover up with cologne and when that didn't work they unplugged a septic tank and slowly poured. Plus there was a hint of marigold. Steve Urkel even threatened with a lawsuit until he realized that he had eaten a bean burrito for lunch and "cut the big cheese" during his scent test, so the septic stench really wasn't that far off. "Did I do that?" he inquired.

Needless to say, Harold Butter's employment at Grunge Publications was short lived. After promising not to sell Grunge's perfumed secrets, which he didn't know anyway, he pulled the old "You can't fire me because I quit" routine. He lived out his old age in New Jersey and became the first person in the state who remained unbothered by the rank odor.

At that point, vast readership for Smells Like Teen Spirit had been lost and Melvin's fortune began to disintegrate. Just as things seemed like they couldn't get much worse, Grunge Publications was sued, but not by Urkel. Instead, it was a Japanese pervert.

On April 5th, 1994, a lawsuit filed by the Matsuki Corporation, Japanese makers of vending machines stocked with previously-used schoolgirl underpants, was brought to trial. Japan has a long history of selling odd commodities by mechanical means, including wasabi-flavoured samurai swords, handheld virtual disembodied spirits, unpopular opinions, and even smaller vending machines. But the Buru-sera market ("buru" meaning sick and "sera" meaning fuck), popular among Japanese men who simply couldn't relate to maturity in women, was an instant yenmaker.

The company claimed they held the international trademark on the Smells Like Teen Spirit brandname and took Grunge Publications to trial. The final moments of this landmark case were among the strangest in courtroom history.

In the end Grunge was convicted on three counts of "territorial pissings" and nine counts of "a denial".

After the trial, Judge Raunchola was asked if he experienced any difficulty reaching a decision in the case. He seemed lost for words as he tried to work out the foreign exchange conversion rates of yen to dollars in his head, saying only, "I found it hard... it was hard to find." Pressed further, he scoffed, "Oh well, whatever. Nevermind."