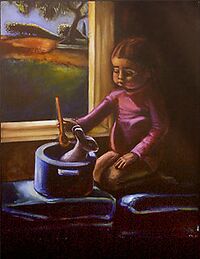 Easter Bunny, also know as Free-range Easter Hare, or Rabbit a la Pascha, is a traditional holiday meal prepared during the celebration of the far-fetched holiday known in Judeo-Christian society as Easter. As the holiday focuses on the brutal death and inexplicable rebirth of Jesus Christ, so too does tradition dictate the slaying of a rabbit[1]. Only the rabbit doesn't resurrect itself; it is consumed by good, wholesome Christians in celebration of Christ's life. Or death.. or something. 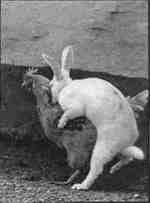 A randy Easter Bunny mounts a chicken. Together, the two shall make a meal fit for kings.

Each year, on a Sunday in April (dictated by the Pope at some point prior to April), the youngest member of a good Christian family is sent into the closest forest and told not to return without a dead rabbit in hand. After stalking, slaying, skinning, and gutting the animal, it is also the youth's responsibility to prepare a four-course meal with the bunny as its centerpiece. In doing so, according to Christian Easter Law, the young person becomes a more devout follower of Christ, and a more popular student in school[2]. After the meal, the family prays, sings songs, and thanks Christ once more for dying for the sins of man.

In order to avoid debates over religious freedoms, law enforcement agencies allow the young Christian hare-seekers to roam wooded areas freely, and generally do not respond to emergency calls involving missing persons until the week following the Easter holiday. It is generally agreed upon in most Christian communities that if a child is not fit enough to capture the Easter Bunny, he or she is altogether incapable of fully serving the Lord and is therefore worthless.

Another Easter Bunny was Harvey Korman, who used to bring gifts to children in a basket every Easter, color old rotten eggs funny colors and call them Easter eggs, and happened to look like a giant rabbit. Unfortunately, Harvey Korman passed away, and children began getting fewer gifts. Many blame it on the economy, but the truth is, there is no more Harvey Korman.

The Easter Bunny was a poor son of a merchant, a rabbit living in desperate times. He had to quit school in order to help his father in supporting for his 187 brothers and 139 sisters. After the tragic death of his parents in 1709 by getting stepped on by the Pope, the Easter Bunny went mad, and killed all the children in Austria, to feed to his brothers and sisters. The next morning, after a night out drinking, he returned to his home to see it burnt and a sign that said "YOU ARE NEXT". He didn't want to die, so he fled to the western world, on a French boat headed for Quebec, where he currently resides.

The feast of the Easter Bunny can be prepared any way the family's youngest member sees fit (as long as a vague religious theme can be applied to the dish). Below are the more common forms of Easter Bunny entrées:

Though any of the above methods are acceptable for the Easter feast, the finished product must be palatable. If strictly interpreted, the Bible states that a poorly prepared Easter Bunny is punishable by stoning.

Bill O'Reilly, disgusted by rogue religions attempting to infiltrate the fun of Easter Bunny hunting (following a report on how this infiltration relates to Santa Claus).

The slaying of the Easter Bunny became such a popular event in Christianity that naturally, other religions became interested in the practice. Eventually, rabbit killings became so popular that Christian awareness programs began to spring up across the nation. As such, every year near Easter, men in giant rabbit suits visit malls across the nation, preaching the words of Jesus and warning children of other religions not to meddle in theology that doesn't belong to them.

After these sermons, photo opportunities are generally granted, but only to the pious.

A recent PSA aired by various anti-religious groups against the Easter Bunny.

Over the years, organizations like Heathens Who Hate Jesus and Godless Idiots Who are Definitely Going to Hell have spoken out against Christianity (and, tacitly, the practice of slaying bunnies to celebrate Easter). Their cries of animal cruelty have fallen on deaf ears, however, as Christians are mandated by God to worship him however they think the Bible tells them to. This methodology also renders Christians exempt from legal prosecution and prison sentences.

Easter eggs are bonus features on DVDs and in video games, and as such, bear no relation to the Easter Bunny.