Emos rejoice as they are able to actually find love for the first time in 365 and one quarter days ... just kidding.

Valentines day (also known as V-Day or Emo Poem day) signals the start of the human mating season. Around February 14th, females of the human race release a hormone, attracting males from all over. It's named after Saint Valentine who was the first recorded victim of this phenomena, an experience that so effected him that he volunteered for lion wrestling at the Colosseum. 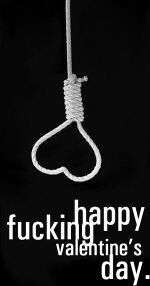 This hormone may make males irritable, often causing them to compete for their desired female by working themselves into a frenzy of shopping. The male will exchange gifts with the female and often invite them to a party or school dance. Woe to the male who forgets or ignores this holiday, for the infamous Hallmark Curse will cause him to break up with his significant other, should he have one, or cause him to be branded "unromantic" for life. 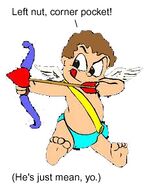 Cupid, the perennial emblem of Valentine's Day, is the mischievous and voyeuristic cherub who, with his Bow of Blinding, has wrongly linked more hapless couples together than angry farmers with shotguns. He enjoys a far better reputation than he deserves owing to the human habit of crediting the person who introduced a happy new couple to each other, but forgetting who that person was by the time it all ends in tears.

Since a recent statistical analysis showed definitively that less than 5% of relationships actually last long enough to be rewarding, Cupid's heretofore legendary aim and foresight has been debunked, exposing him as little more than an arbitrary sniper with an obsolete weapon.

As the ranks of the romantically ruined continue to grow due to Cupid's ceaseless depridations it has reached a kind of critical mass, as Egypt has. Once thought of as an immutable fixture that had to be tolerated, Cupid (the Mubarak of love) is now seen as vulnerable. His days are numbered; there's a price on the little bastard's head and a number of 'unlucky at love' angry and well-armed.

Since the dawn of time, men have been plagued by the dilemma of how to get girls to spread their legs without expressing their feelings. Early attempts involved springs, car jacks, and possibly the most unsuccessful invention of all time: the wheel. Finally, a man named George Washington Carver managed to bust a nut without cracking his outer shell by inventing the Valentine's Poem.

The Valentine's Poem enables men to avoid writing a truly heartfelt poem by using the well known "roses are red" template. It uses an incredibly complex meter, which Albert Einstein once calculated to be a mathematical paradox. This is the brilliance of the Valentine's Poem. While a girl reading the poem experiences a tender feeling, that feeling is actually hollow since the poem does not actually exist.

Here are a couple of examples of successful Valentine's Poems:

Are belong to you

Here is an example of an unsuccessful Valentine's Poem.

Come 'ere so I can impregnate yer!

Valentine's Day is part of a government conspiracy to get the nation to breed and build up its population. It was invented during the American Revolutionary War by General Valentine as a way to swell the ranks of American revolutionary army. This program is the only reason why America won the Revolutionary War and every other war since.

It is well documented that King George III felt threatened by Valentine's Day, and on February 14, 1775 the British Army commenced Operation Cockblock, a devious nighttime offensive in which they planned to walk into patriots' bedrooms without knocking first, initiating coitus interruptus. Fortunately for the patriots, a genetically-inferior man named Paul Revere learned of this attack and rode from Boston to Lexington, warning the patriots with his now-legendary chant:

The British are coming

So blow your load soon

Thanks to Paul Revere, the American patriots sired a new generation of soldiers, who unfortunately matured at a time when there were no wars and there wouldn't be for a long time. Four score and seven years later, as a symbolic flipping of the bird to Paul Revere for the hardships he caused those patriots, President John Wilkes Booth made Valentine's Day a national holiday on which Americans are required by law to have sex. However, the holiday no longer has a reproductive purpose and it is common for Americans to practice birth control by giving each other Hello Kitty Valentine's Day cards, which have been proven to render men sterile.

After sending the love poem to the girlfriend anonymously, and requesting a venue for their Valentine's Night, the two emos will meet up, usually in the local knife shop or tattoo parlour. The female emo (hereafter referred to as the femo) will feel sorry for the male emo's (hereafter referred to as the memo) desperate attempts at winning her heart. Luckily, the femo has her hair fringe so far below her eyes that she cannot see how 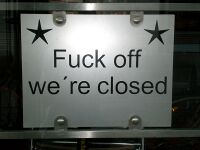 There is little research or info on Gay Valentine's day- nothing much on record. Nevertheless, as rarely documented since 1679 as it may be, there are sources pertaining to the management of such an event. Sources there may be, but mostly these sources are cartoons such as South Park and The Simpsons, are vehicles of release for locked up emotions/ideals.

The people who created the following cartoon were so in denial that they hid it among the library of CDi games, hoping it would never be played. Sadly, it has become an internet hit. Sadly, once history is written, there is no way of erasing it. Sure, people can deny it, but they can't erase it. This is very much the same with game and cartoon characters. You see, once written, no matter how crude it is, the history sticks. In the world of fiction, anything goes after all, does it not?

So, a gay valentines picnic:

Other note: very little research indeed. This time fragment is all we can find for now, but we're certain the bigger picture is a Picnic, or a PINGASNIC. Explanation: A device known as the Gay History Emitter, alters time and space to try and remove all traces of gay references.