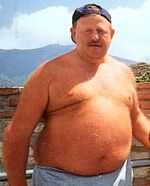 The romantic image of St.Valentine inspires love and flatulance throughout the world each Valentine's Day (Source: Vatican City archives)

Saint Valentine is the patron saint of overpriced greeting cards and an encourager of infantile poetry.

The legend of Saint Valentine begins in Scotland. Or was it Ireland? Anyway, Saint Valentine played his flute and all the little children followed him, and for that reason, every February we give each other gooey, sentimentalized rectangles of gaily colored sheets of stiffened paper . Valentine was later beaten to death by everyone who didn't get any cards that day - and it served him sanctimoniously right.

In reality the "legend" of Saint Valentine was the invention of Fred and Ethel Hallmark who had inherited a warehouse full of blank white cards, some inherited poetical off-cuts and a few cases of soiled stuffed toys. It didn't seem a lot but thanks to the advise of their best friend Franklin Mint, they didn't burn this rubbish and instead decided to 'Monetize' them instead.

Unwilling to spend money in expensive USA or Europe to work on these raw materials, the Hallmarks shifted all their production to India where everyone under the age of seven was happy to work just for a smile and pat on the head. However the Hallmarks ensured their workforce remained blissfully illiterate and so couldn't be influenced by Facebook, Twitter or Will Smith. It worked and so did the little children, in honor of course of Saint Valentine who was looking down from heaven and smirking.

Setting out from the Hallmark import-export bargain bin counter, a flotilla of small ships made Passage to India looking for a geographical and financial short cut..Or was that the Pilgrims? Anyway, as the Niña, the Piñto, the Monte Carlo and the Piña Colada were sailing in the Bay of Pigs to bring happiness to a Communist country, they encountered a storm called Hurricane Hillary Clinton.

Stamp commemorating the morons on the Piña Colada that fell off the end of the earth (source: British Dental Association).

As they found dry land, the Hallmarks decided that they needed a new way to make money off the Casino Owning Americans Indians. Things being what they were, they decided to cut down trees to make houses, boats, wood, fiber, and carbohydrates. Soon they were fat and happy, especially when the Indians introduced them to Buddhism.

However, all was not well in India. Cricket was soon discovered and stained the hearts of all around. Soon, they were resorting to violence, farming, and pirated DVDs. After a year, the Hallmarks were forced to flee to the nearby country of China where the labor was cheaper and the government more obliging.

The Hallmarks were soon able to extend their nefarious card posting habit to other days of the year. So soon it became a relief not to get a card through the post or down an electronic internet connection but that costs money, like going ex-directory or living inside a gate community with 24 hour armed security.

What this had to do with Saint Valentine? Well buggered if I know now. Just don't send a card on Labor Day, it's bad luck (though Fred and Ethel Hallmark really wish you would..go on now..it's only another bit of cardboard with a pretty picture eh?).

"All I want for Christmas is you" by Mariah Carey is worshiped every Christmas by Hallmark Channel. EVERY. SINGLE. ONE.