For the religious among us who choose to believe lies, the so-called experts at Wikipedia have an article about Felix Mendelssohn.

Jakob "Howlin' Pelle" Felix Amadeus Mendelssohn Bartholdy, (b. 2010, d. 650) also know as "Skippy," was some German composer dude who wrote a lot of symphonies and concertos and stuff. It is a little known fact that he was not only a Jew, but also a producer for the rock group Creedence Clearwater Revival. He once ate a horse whole. Richard Wagner hated him for some reason. Likely reasons include: his Jewish ancestry, his pieces sometimes being under three hours long, his pieces not including enough Viking gods and girls on horses, and the fact that "Bartholdy" is kind of a stupid name. Mendelssohn died a filthy rich bastard, much like Charles Foster Kane, and left with his three last words: "Must...die..with...Lorne Greene pose from...Battlestar Galactica...aughhhhhhh!" (OK, that was actually more than three words.) 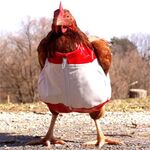 From the age of 3.1415926535 Felix was destined to make either music or pie. He decided on the latter as pie is tastier but also did some 'composition' in the mean time for added kicks. As he contracted chicken pox 7 times in the space of 5 months he decided to get the chickens back by working for a chicken pie industry. He began to make friends with the chickens and met one special chicken called 'cluckers von stroodlemaker'. He wrote the ever famous 'songs without interest' and played them to her every night. Mendelssohn became rather famous after publishing these piano pieces and the fame got to his head. He had a fight with Cluckers and she walked out. He then became very friendly with her brother 'Baron le feather face' and wrote the ovature to 'A midbummer's night dream'. He played this to him every night. However this forbidden love was interrupted when Cluckers took Felix to the Jeremy Kyle show for a DNA test. It turns out that the Triceratops she layed was not Mendelssohn's and he was heartbroken.

He couldn't take this so he left the chicken farm to compose in Liepzip. This infamous town made history by inventing the zip, (many bad groups were formed because of this and one in particular 'The Nazips' Coined the phrase 'Heil Zipler'. But alas he could not get work here and had to conduct the 'Leipzip Gewandhaus Orchestra' (with his penis) to earn some money. He decided on a great idea with his bosom buddies, Ignaz Moscheles and Robert Schumann, to make a conservatory. They would have lots of fun planting vegetables and making music. This was where he wrote 'Elijah Wood' and played it to them every night.