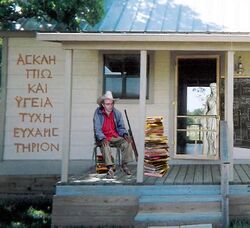 An intellectual yokel cautiously defends his property with his trusty shotgun. However, when it comes to defending Intellectal Property, you need professionals.

Intellectual Property (IP) is a piece of legal jargon referring to what is considered "hard work" and "good effort". In third world countries, the unauthorised use of "intellectual properties" is considered punishable of death, whereas in advanced countries, such as the GloriousPeople's Republic of China, citizens are encouraged to copy items of this category to pretend to be intellectual.

(Parts of this article cannot be disclosed except to the accredited business partners of the authors.)

"Intellectual property" is a long term to pronounce, and the acronym "IP" is confusingly shared by Al Gore's invention "Internet Protocal". In order to address this issue, an international agreement has been reached and all intellectual properties worldwide are further subdivided into 5 categories and referred to by their respective category names. These categories are:

Thus, the use of "intellectual property" and "IP" can now be left for the lawyers to worry about. 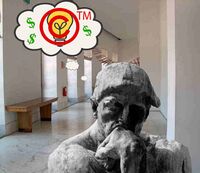 The Thinker's idea could lead to big bucks if he copyrights it first!

© Copyright is a protection for crappy music composed by musician wannabes and random silliness written by non-noteworthy individuals. The idea of copyright is simple: if you have a feeling that someone/thing is copying what is supposed to be your work, you sue - sue until the said entity is removed from the universe. RIAA is an attorney for such matter, although they do not protect your homework/thesis from being copied by That Guy next to you.

Patent is a piece of creative writing submittable and endorsed by a local patent office. Reading a patent application takes time - especially when the invention described is not an adult product or does not involve bikini-clad women - and thus most patent offices worldwide offer also what is know as "pending patent". Pending patent is a patent that prevents an invention from being copied or imitated, provided that the said invention has not been seen or heard by anyone except the inventor him/herself. Once the patent office has agreed on an endorsement, a pending patent becomes a real patent, which works in the same way copyright does, except the suing bit.

What you can apply a patent for[edit]

What you cannot apply a patent for[edit]

Example of a patentable product[edit]

"The present application provides a solution for individuals and groups who are situated in an illumination-limited area, the photon-driven illumination apparatus being a portable device with an arbitrary number of photon-electricity converters. When photons from one or multiple arbitrary sources of the said quantum particles are captured by the said converters, the said photons are converted to electricity and immediately transferred to one or multiple light emitters via one or more arbitrary electricity conducting materials."

All trademarks falls into two categories. These are:

Registered trademark® is a vanity manifesto registered in the local patent office's trademark records. The said manifesto could be a series of letters arranged in a strange manner, like iPod®, or simply someone's ugly face. In times, however, attempts of icon registration were made by corporate tycoons/lunatics with the view of world domination, but each time the application was wisely thrown out by the respective patent office in preventing a possible, global disaster. Here are some examples:

Common-Law trademark™ applies to all the things you think is trademark-able. Here are some examples:

Curiously, the actual applicable acts on Common-Law trademarking are simply a bunch of random silliness that no one cares about.

Industrial design rights apply to objects one desires to but simply cannot patent or trademark. In simplicity, an industrial design is what a primate can possibly come up with. One excellect example is the masterpiece you threw together last week in a pottery lession when you were having wild fantasy with your neighbour's wife. (Is it not why you joined that stupid class in the first place, after all?) Anyway, the bottomline is: one must pay a local patent office to get a brilliant invention registered as an "industrial design".

Trade secret generally refers to an art of trade or apparatus employed in screcy during a business venture. Unlike other variants of IP's, trade secret does not require registration at a patent office or endorsement and declaration of any sort. Some examples are:

A revealed trade serect is usually referred to as "scandal".