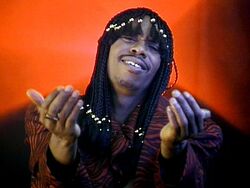 David Khari Webber "Dave" Chappelle (born August 24, 1973) is the guy who dressed up like Rick James and said "I'm Rick James, bitch!" to the delight of edgy Caucasian teens across the globe. It has been suggested that he has done other things with his life, but those claims are unsubstantiated.

Not much is known about Chappelle's early life. However, if you would like to know about Rick James' childhood, then check out the article on Rick James! They probably have similar childhoods, anyway, since Chappelle spent most of his later life pretending to be Rick James, bitch, anyway.

Chappelle was a stand up comic before he did Chappelle's Show? No, that must be wrong. 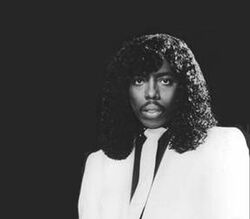 For the religious among us who choose to believe lies, the so-called experts at Wikipedia have an article about Dave Chappelle.

In 2003, Chappelle wrote, produced, directed, and starred in auteur project Chappelle's Show on Comedy Central. The show featured Chappelle and associates in a variety of sketches, most of them involving drugs and rappers. This made the show an instant hit among its target audience, middle-class white youths.

In the show's second season, Chappelle upped the ante by bringing in Charlie Murphy for a number of his sketches. Charlie, brother of Caucasian favorite Eddie, catapulted the show to new heights with the famous "True Hollywood Stories" sketch, in which Chappelle put beads in his hair and said "I'm Rick James, bitch!"

The sketch and the other, forgettable bits of the episode instantly went classic. "I'm Rick James, bitch!" entered the national consciousness; it was quoted everywhere, from CNN's Situation Room to junior high school lunch lines across the nation. Most of the people who spouted the platitude didn't know who Rick James was, being white middle schoolers, but still found the phrase inexplicably hilarious. As such, it has become a subject of extensive study, leading to a huge breakthrough in comic theory known as The Chappelle Corollary:

In 2008, a study performed by fellows of Tuscaloosa Clown College modified the Corollary with what has been called the Sinbad Addendum:

Dave Chappelle, needless to say, was pleased as punch that his comedic passions had suddenly become an extremely profitable catchphrase for awkward white children. Later episodes of Chappelle's Show capitalized on this glory by modifying the phrase to fit the central theme of the sketches. Such skits included:

These replicas failed to match the success of the original, forcing Chappelle into financial ruin. Contractually obligated to produce a third season without the necessary finances, Chappelle panicked and fled the country for a brief sabbatical in Africa. 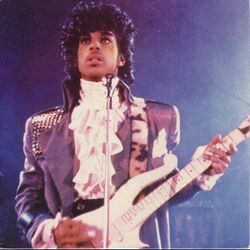 Chappelle returned briefly from Africa to fight with Comedy Central over whether they had the rights to air a collection of unreleased sketches as a "lost" third season. Comedy Central considered honoring Chappelle's wishes and preserving his artistic integrity, but Lost was just getting popular, so they couldn't miss such a viable opportunity to cash in.

Chappelle refused to take part in the third season, effectively voiding his contract with the nasty side effect of being cut off from the profits. When he attempted to buy a ticket back to Africa, his credit card was denied, forcing him to stay in the States.

Realizing he had gone broke, Chappelle asked his friend Spike Jonze to throw him a benefit concert in his hometown of Brooklyn. Jonze recognized the trouble that Dave was in immediately from his restless scratching and prominent cocaine residue on his lips, and agreed to put on the show. Some of the greatest rap and soul acts of the time performed, including Kanye West, The Roots, Erykah Badu, and Mos Def. Unfortunately, Jonze scheduled it right when that Chappelle's Show about the Playa Hata's Ball was on TV.

Due to the conflict, the event failed to garner an audience, further suffering after only half of the scheduled performers showed up. "I love that episode," said Mos Def, who raced home after remembering he forgot to set the TiVo, "I wasn't gonna miss it for anything."

Chappelle began performing stand-up comedy to scrape by after his show ended. His act consists of him prancing around stage with beads in his hair saying "I'm Rick James, bitch!"

He started out slowly, but has since caught on with the private school community. In 2009, he saved enough money for another exile to Africa, but has put it off to start a national stand-up tour. "Most of my original audience should be old enough to go to college now, I think," said Chappelle in an interview with Seventeen magazine. The interviewer went on to ask if he still felt like he was Rick James, or if he was ready to turn over a new leaf, to which Chappelle replied "I'm Rick James, bitch!"

A conclusive DNA analysis in 2010 has proven beyond a doubt that Chappelle is not Rick James, bitch. Despite this evidence, Chappelle has continued to tour on the false premise that he, in fact, is.