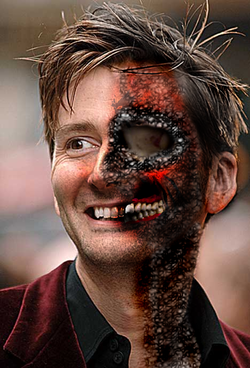 ~ David Tennant on his performance as the Doctor

Dr. David Tennant is an act-or from Pictland widely considered to be the sexiest man to have ever lived, beating aging knicker-dampener Sean Connery into second place. He is most famous for hosting the series reboot of the sci-fi comedy Doctor Who, shortly after Northy McNorth North The Black Pudding Man left the show. The word that comes to mind when thinking of David Tennant is, God. Yes its true, David Tennant is in fact Zeus, the king of Greek Gods.

For the religious among us who choose to believe lies, the so-called experts at Wikipedia have an article about David Tennant.

Tennant was born David MacSporran in deepest, darkest Caledonia where it rains all the time and mad old men wearing skirts and carrying sticks with ram's skulls on top drive sheep across the mountains to escape the plagues of midgets and the 'terrible Inglish!'. The young MacSporran thirsted to escape from the work in a porridge factory his parents had lined up for him and the wedgies that he suffered daily at the hands of old men and, one summer's day when the rain stopped long enough for him to get his bearings, he fled south to England and the nearest large town. There he was forced to escape the attention of marauding redcoats looking for 'Jacobite scum' by hiding in a theatre troup. It was through doing this that he discovered he had a knack for acting. Determined to hide his Pictish ancestry lest he be shot as a hairy-bollocked traitor under legislation passed by then-Prime Minister Margaret Thatcher he changed his name to 'David Tennant' and made a name for himself as a thespian and skinny fop. 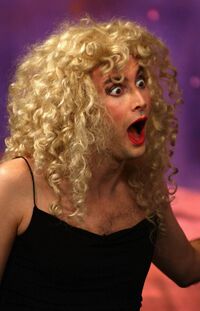 The picture says it all.

Eventually growing tired of announcing fights between rogue Immortals and Journalists, Tennant auditioned for the role of Aerith in Final Fantasy VII: The Musical, but was ultimately turned down when the producers decided to utilise CGI instead of real actors.

The Doctor Who years[edit]

After nearly reaching rock bottom, he was picked up by the almighty BBC, which then turned him into a Time Lord where he started an affair with Billie Piper, in which many dirty, unspeakable acts were committed in the TARDIS, hence why many have begun to refer to him as "David Ten-inch".

Tennant was currently filming the fourth series of Doctor Who. This series will be unique in that Billie Piper leaves the series to be replaced by Mr T who will yet again be playing himself as a woman. It is reported this season will have much more controversial subject matter. The episodes are said to deal with such things as male pregnancy and homosexuality. Captain Jack Harkness, the Doctor's long-standing Omni-sexual lover, will return to the series and get the Doctor pregnant in the final episodes (rumour has it he gives birth to triple-hearted twins). This is an attempt to explain David Tennant's actual pregnancy.

The casting decision was ultimately not made in Tennant's favor.

Many people have speculated that the current series will be the last, due to both Tennant's other commitments in an upcoming Shakespeare play 'TARDIS, where art thou? To be or not to be travelling in time' and worries over typecasting. So far these fears have been unfounded. Numerous successors have been noted to replace him, including but not limited to Tony Blair, Ross Kemp, Boris Johnson and Barney the Dinosaur. So far Barney is the odds of favourite for the Bookies.

Tennant has recently left Doctor Who and has given his role as the doctor to some fuck ugly twat named Matt Smith, not Will Smith. Will Will Smith be as good as Tennant? Absolutly not! We already know this because he's no where near as good looking as Tennant.

After the FF7 fiasco, Tennant was convicted of the murder of famed actor and evil man John Simm. Tennant claimed that it didn't matter, as Simm would just regenerate anyway. The court informed Tennant that Simm was on his twelfth regeneration, to which Tennant replied "Fuck! I'm Screwed."

Tennant also provoked controversy after publically admitting he supported the Labour Party. He then cemented his fanatical communism and did an advert for Tesco, which is like a bit like a vegetarian doing an advert for a sausage maker. To punish him for his hypocrisy, that BASTARD David Cameron had him put in to prison, because he wanted him to be raped because he's a freak.

The Ressu(e)rection Spell in progress. What? this was a spell created by FANGIRLS, for God's sake!! what did you expect?

While in prison, Tennant choked to death on a particularly nasty pear. However, a secret occult group of fangirls managed to come into possession of his right hand and, by using a special arcane "ritual", they managed to resurrect him.

Realising that he was otherwise going to spend the rest of his life as some form of sex slave, Tennant escaped and, with the vast armies of women at his disposal, marched straight into the Houses of Parliament and took over Britain. Tennant now enjoys a successful life as Supreme OverLord Kill-Machine of Great Britain, telling people what to do and shooting Astrologists. In the near future he hopes to "turn all horses into glue and wipe out all species of moth". His hordes of fangirls are said to be driven around like a cattle drive, as their sheepish, slavish qualities render independent judgement impossible. Fangirl-drivers, specifically Footfaced Will Smith and company, deal with these hordes of slaves.