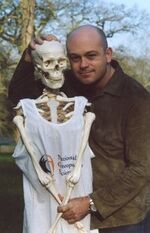 Ross Kemp with what is widely regarded to be his one true love, Dot Cotton, before his fiery gaze destroyed her by accident... You Slag!

For those without comedic tastes, the so-called experts at Wikipedia have an article very remotely related to Ross Kemp.

Ross James Kemp (born 21 July 1964) is the world's most versatile actor and was a member of the SAS (Super Army Soldiers) as well as frontsinger of Spandau Ballet. The reason for his extremely convincing acting and other superpowers can be accredited to him being being the reincarnation of Jesus. His role to save mankind from every kind of trouble. He is also known in Britain as God, and has often thought to have been the father of Vin Diesel, and to have created Chuck Norris and Mr T as counter-balances to his son's powers, lest they go unchecked. He lives in Holland house.

Ross Kemp is still the only person ever to exist to beat chuck norris at a game of bullshit, his ability to keep the same expression is far from easy and should only be reffered to as "Godlike Properties".

Ross Kemp is also despised by many for creating the two most blaphemous words in existance.... "you slag"...you slag

Whilst the origins of his death are not confirmed, it is believed that he tragically drowned in Jeremy Clarkson's Renaultsport Twingo 133 in Belfast.

“Get Out, Or You'll Be Spending Next Christmas Where You Belong; In The Gutter!”

~ Ross Kemp on His Biography

Not many people know that Ross Kemp wrote the screenplay for 2 girls one cup, he said "i am proud of my results" and "i did this with my dog".

Whilst many people have lamented Ross Kemp for his strongly British accent, and insanely unshiny yet somehow bald head (Kemp is said to have realised his full potential upon going bald; according to scientists, his hair had a 'weakening' effect on him, similar to the effect Kryptonite has on Superman), it is possibly these two traits that have given him his awesome powers, which led him to defeat Godzilla in 1962. Whilst it is widely believed that King Kong actually defeated him, it was actually that Hollywood edited out Ross Kemp as he was deemed too threatening for American audiences. If you listen closely to the original soundtrack, however, it is possibly to hear the words "YOU SLAG" very very quietly during the climatical fight scene between the two.

Whilst it is unknown when Ross Kemp was actually born, most scientists agree that it is likely to coincide around the time of the Big Bang, when the cosmic energy required to create him was still lying around. We're not entirely sure about his upbringing; it is most likely that he was raised by both Michael Caine and Arnold Schwarzenegger, which would explain his accent. Not content with being God already, he wiped their minds, confined them to earth and forced them to live out lives as actors playing stereotypical roles. As Ross later discovered, fate is not without a sense of irony.

Upon creating the Universe, and tired of being worshipped, God grew bored of playing the good guy and having too much hair, so he sent his one and only son to kick ass. However, when Jesus turned out to just be a doo-gooder, God snitched on him to the Romans and sent himself, in the form of Ross Kemp instead. To disguise this fact, however, he lost all of his hair, and made his face slightly more round, so that nobody would recognize him as he wished to remain anonymous. This plan was foiled when he broke down the Berlin Wall, invaded half of Russia, killed more than two-thirds of the Red Army, and saved 59,349 innocent civilians from a nuclear attack, after which people began to grow suspicious. In a quick thinking life-saver, Ross made sure that the news footage of him was shown on ITV under the name Ultimate Force, so that people were tricked into believing it was a TV show.

Later on in life, Ross Kemp was once considered to be the frontrunner for the Democrat presidential nominee. Considering that Ross Kemp had no intention of running for President, that he is not a US national and that his name was not mentioned once by the media during the Invisible Primaries, this is pretty impressive. Ross Kemp later denied ever being a democrat at all, as he's not even left wing. In fact, Ross Kemp is extremely right-wing. So right-wing in fact that he's off the ideological spectrum, and believes in equality for everybody based on the fact that the Jewish are whining gits, and some people are gay, and in a controlled state economy based on the belief that the free market works best. He also believes in higher taxes so that public spending can be cut. He has called [[Aug usto Pinochet]] a "pinko slag" and Adolf Hitler "that liberal slag".

Ross Kemp is very well known for his huge penis worldwide. Some say it is 50 inches and some say it's 500 but recent scientist's have proven it is infact 5000 inches. He has used it for many good encounters and everyone has been pleased with the results. He will live on and continue to please the female population.

It is now widely accepted that Sir Ross Kemp is not only the richest man in Britain but also the World. He claims that his time acting in ITV's hit show Ultimate Force earned him "a pretty penny." Sir Kemp has revealed that with his vast oceans of cash, he will construct the largest golden statue of himself to date.

Ross Kemp has often been blamed for the tragic events that occurred in Hiroshima in 1945, when the U.S government was able to steal two individual atoms of Ross Kemp, and then rubbed them together, which generated enough awesome cosmic energy to wipe Hiroshima off the map.

Ross Kemp vehomently denies ever taking part in this, saying "I have never been an angry bald nuclear explosion, so shut it you slag!"

Hiroshima was later proven to indeed be the work of Ross Kemp when it was revealed that he had once masturbated 65,000,000 years ago, coincidently the same time that the Dinosaurs were wiped out.

All be it not a super power ross kemp has the ability to scare homosexuals straight.

~ Ross Kemp on every film that he's never been in

The following is a list of documentaries have been made about Ross Kemp, each one portraying a different aspect of his life, and showing that he truly is the most versatile actor in the world.

Here are a couple of interesting and intellectual quotes which accurately convery the wisdom and intelligence of Ross Kemp.

~ Ross Kemp on Barney the Dinosaur

~ Ross Kemp on The Republic of China

~ Ross Kemp on Your Mother

~ Ross Kemp on The Universe

Contary to most peoples beliefs, which see Ross Kemp as just an actor, albeit a remarkably versatile one, Ross Kemp has been writing poetry for many years now, and has been remarked as one of the great literary composers of our century, alongside Carol Ann Duffy and Winnie the Pooh. His most famous poetic verses include 'Shut it you Slag' and 'Sonnet of Slags'.

'Twas brillig, and the slaggish toves Did gyre and gimble in the bag; All mimsy were the borogoves, And the mome raths out you slag.

"Beware the Slaggerwock, you slag! The jaws that bitch, the claws that catch! Beware the Jubjub bird, and flag The frumious Bandersnatch!"

He took his vorpal pencil in hand: Long time the manxome foe he sought -- So rested he by the Tumtum tree. And stood awhile in thought.

And as in uffish thought he stood, The Slaggerwock, with eyes of flame, Came wiffling through the tulgey wood, And burbled as it came!

One, two! One, two! And through and through The vorpal blade went snicker-snack! He left it dead, and with its head He went galumphing back.

"And hast thou slain the Slaggerwock? Come to my arms, my beamish boy! frabjous day! Callooh! You're Gay!!" He chortled in his joy.

'Twas brillig, and the slithy toves Did gyre and gimble in the bag; All mimsy were the borogoves, And the mome raths out you slag!.

My dear fair Maria, love finds me oh so sweet,

My love for you my dear, I always must brag,

However, I found, that with Phil you did cheat,

so now I must say, Shut it you Slag!

I can't believe I trusted you, after you said,

the reason you were tired, was cause of Jet Lag,

I feel so betrayed, and now I must dread,

I used to adore you, but now I don't know,

now that Phil told me, you two had a shag,

such news came to me, as a heavy blow,

Following the phenomenal success of Ross Kemp on Gangs, Sky announced the following one-off specials to be aired sometime whenever they have a hole in their schedule:

His great friend Saeed Agboke is known as the black Ross Kemp!

The show was also spawned several other spin-offs that have nothing to do with gangs. These include:

"Ross Kemp In Afganistan" has also spawned several spin-offs. These include:

Documentaries made by Ross Kemp that do not feature in the "In" or "On" francises. Some of them you may reconise: