Ash (Ashley Ketchum) (March 23, 1995 - June 24, 2007) is the very common product of volcanic eruptions that stars in the hit Reality Show Pokemon. The surname Ketchum is derived from the Latin root Catch'em. God just wanted it that way. Ash is a name likely akin to his huge quantities of marijuana that he smoked, leading to the tripped out adventure with an electric rat.

Ash often dresses in his mom's clothes pretending to be a girl called Misty. Why do ya think Brock never fell for Misty? But how come we see Ash and Misty at the same time? That Ash is merely a robot controlled by Pikachu. When You don't see Misty, that's the real Ash.

He also possesses a Justin Bieber Award in Long-term Postponing of Puberty. Even at the age of twenty-three, he remains physically and mentally a dumb shit ten-year-old, although--due to the handy changing of voice actors--his voice has recently grown deeper. This may be a sign of his balls finally dropping. Experts estimate that, at this rate, Ash should begin shamelessly hitting on Misty by season 38. Of course, by then, she and Brock will have started a pimping business, so he'll be out of luck. Pika-pika indeed! 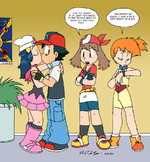 The many loves of Ash Ketchum.

Ash at a young age had to go into therapy, for he had a confrontation with a Pikachu, and a bunch of Mudkips from a far away region. They all just fucked the hell out of his tight little butthole. No one believed young Ash for some reason their advanced technology did not allow them to contact the other region, or have people from other regions bring their "advanced" pokemon, so in terms they did not exist to Ash's hometown region

Ash is known to ask the wrong people for a pokemon battle. This was taken when he asked Dirty Harry. Obviously the PokePunk wasn't feeling lucky, and it made Harry's day by having his head blown off. Again.

Ash, in the act of throwing a large wooden spear at the enemy Pokémon.

Anyone past the age of two knows the story: after 10 seasons and 850 episodes, Pokemon still hasn't lost its steam for many reasons. The show took a new turn; Pikachu (Ash) was successfully kidnapped by Team Rocket, causing Ash to commit suicide. Details are below. The show still trickles on, however, somewhere in season 11, with Brock as the new lead.

Ash was accepted into the reality show, Pokemon, at the age of ten. Like any good cool kid, he stole a bike 17 minutes into the show from Misty, who was tacked into the show. They traveled together until meeting Brock, the only cool person on the show.

Ash, being the main character, was the role model for millions of kids. He danced around the screen, controlled by Misty aka his sister aka some chick he stole a bike from aka Ash, and later Max, and later Dawn. He is generally considered a kind of hippy hobo pimp as he has a knack for getting young girls to follow him in whatever foreign lands he goes, then he discards them after he's finished using them and starts a new, making sure to change his appearance ever so slightly. He is best friends with Brock the jock who is one of his scouters hounding down many women especially if their a nurse or policewoman. He engages in Pokemon Battles, using the weakest smallest and generally most pathetic pokemon only allowing a handful of pokemon to evolve into badassery. But he wins thanks to the fact he uses a game shark giving all his pokemon crazy stats as well as game breaking abilities like lightning attacks working on ground types. His Pikachu, struck by God's Lighting, is so powerful it wins anyways. Despite coming across nearly every legendary pokemon he has yet to attempt catching one further adding to the long list proving his stupidity. Oh, and Ash is the death bringer to all bikes belonging to girls, which the victim bike's owner would stalk him until he pays back for the bike and will anal probe him in his sleep every night if he doesn't.

Ash's family life was complicated and difficult. Raised by a single mother, Ash has never met his father. Many have speculated that Ash's father is the 707584 year old Professor Oak, the Pokemon researcher living suspiciously close by. Other potential fathers include, Giovanni, Satan, Lee Kuan Yew, Russell T Davies, Dave Grohl, Mr. Mime, Kimbo Slice, Mrs. Ketchum (which makes us wonder who the mother is), Maati from the planeteers, the Force, Darth Vader, M Bison, Gangnam Style and everyone and anything else in the world of Pokemon. The high quantity of potential fathers leads one to believe that Mrs. Ketchum spent 12 years as a trainer under the service of Professor Elm of New Bark Town who owned an escort service called the "Pokemon". Ash's mother has never asked much of him. All she ever wanted was for him to change his underpants, but I guess that was too much. 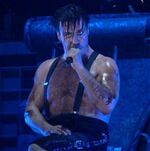 The only known photo of the man that COULD be the father of Ash Ketchum...

His mother had disinherited him because She had caught him jerking off to Her Old Sex tapes (with a faceless person who could have been Oak. Which explains Ash's Distinct Urge to Squash and rape any and all Pokemon He sees, with the exception of Snorlax who Sat on and snapped his Pikachu...) He is seen Engaging in certain questionable activities with his partner Pikachu, He also starred in the documentary on "finger digging" as He was a expert at it (presumably from his many years of practice with Brock)

When ash turned 10 all he really wanted to do was catch pokemon and become a pokemon master but he stayed up all night making sure he had the correct number of flavored panties so his obsessive mother wouldn't beat him again. By the time he fell asleep it was past the time he was supposed to get his pokemon. Gary's pedophile girlfriends were cheering him on and Gary Spoiler got Eevee. Ash was really pissed because he wanted a pokemon he ended up being given pikachu. To make matters worse, his pikachu refused to get in the pokeball because it was against his religion. 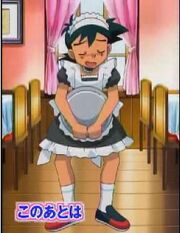 Ash Ketchum, after his her his its third sex change.

One June 24, 2007, Ash was killed in a recent Pokemon Diamond and Pearl episode. In the episode, a rabid Igglybuff was determined to kill Pikachu, who was separated from Ash in an earlier event in the episode. At the climax, Igglybuff is about to deliver a fatal blow to Pikachu when Ash jumps in front of Pikachu and Igglybuff's splash threw him into a glass tower, which collapsed upon collision. Ash, in his dying seconds manages to force a smile and a single tear drop and Ash falls dead. The Igglybuff exploded afterwards. A funeral is attended by all of Ash's friends over the years, including Team Rocket and all sixteen of the Elite Four, plus various stars from films over the ages.

Latias brought Ash back to life and purified him by sacrificing two police officers who blew his head off after he apparently died then came back to life during his funeral and had his head blown off as a zombie. Then Latias broke that purity by landing on him.

After Ash was politically corrected ressurected during Blackest Night, he learned that he has lost his house and his mom is already happy with her new CincoBrand replacement son. After a wild night in Las Vegas and being ass-raped by You, he decided to join the Sith, where he has never been happier in a more insane cult.

He was later kicked out after helping a little girl for no reason, other than being helpful. After getting drunk, he forced himself on Misty (I mean, Mom), and for some reason, she liked it.