“About a hundred years after my death, on a technology I cannot conceive of, someone will author a page on a California University in Mexico.”

Masqueraded in the drab Entertainment and unintelligible World sections of the mainstream media, the controversy surrounding UC Guadalajara, a California University of unknown size, situated in Mexico, has passed well under the radar for much of the Non-Spanish speaking world.

In response to the low percentage of latino and hispanic students in the UC system, a proposal was made by the UC Regents to annex the city of Guadalajara from Mexico, make it a United States territory, then part of California, genocide the natives, and then build a large University after grazing the most historic part of the city. "Since the University will be in a landlocked territory surrounded entirely by Mexico, latino and hispanic turnout should be substantial - as long as they can get their green cards in order" UC Regents spokesperson Aran Ryan said in a press conference that was not opened to the public and held at a secret location.

Since wide opposition was expected, UC Regents published all press releases since the initial announcement through the Weekly World News, who, according to recent studies, has the laziest audience of any respected news publication. By giving the WWN exclusive rights to the press releases regarding UCG, The UC regents were gaurunteeing that there would be the same level of apathy from the public that they exercise in their daily routines.

Much has been proposed about the newest addition to the UC System, slated for opening sometime before the official end of world in 2012 after Emperor George the Second (who miraculously managed to win a third term after the repeal of the 22nd amendment in 2008)confuses a program called "Direct Nuclear Access.exe" for his favorite computer games "RISK: The CD-ROM".

On March 9th, 2006, it was reported by various news agencies that the controversial University was not a planned project but in fact, had existed for some time. In August of 1991, the then council of UC Regents went to the city of Guadalajara and executed an elaborate campaign to promote the idea of a UC school in the nation of Mexico.

Aran Ryan, then president (but now only spokesperson) the UC System made a famous speech wherein he stated "Soy un Guadalajaran!" which, in the dialect of Guadalajara, roughly translates to "I am a crumb cake." which stems from the city of Guadalajara's proud tradition of delictable crumb cakes enjoyed the world over. Coincidentally, "crumb cake" is also slang in Guadalajara for "bumbling fool" so the statement was met with thunderous applause, but not for the reason that Mr. Ryan had intended.

Thanks to knowledge learned from Noam Chomsky lectures, the Regents got Bechtel to privatize the water of the region (mostly because of their smashing success in bringing water freedom to Bolivia). After an armed conflict, a deal was cut that a parcel of 1,000 acres would be annexed to the US in return to nationalize clean water resources. The annexed land happened to be another University of the time, Guadalajara Conservatory. Construction began in August of 1991 and was completed in October of 1993 with the entire affair remaining a classified project. 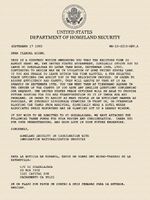 The eviction notice sent to the 17,000 students of the Guadalajara Conservatory

On September 17th, 1993, final eviction notices were sent to the 17,000 students of the Guadalajara Conservatory that the property was now owned by the United States, and that the students were illegally trespassing and didn't even have citizenship rights any more. The notice stated something in the spirit of "You must leave in two days or else you will be arrested and imprisoned. You can apply for admittance later." In the packet were three forms; an application for a student visa, a UC transfer application, and a custodial application form from the UC Regents. Juan Crespo expressed his outrage especially succinctly:

In a last ditch effort, approximately 400 students barricaded themselves in a dormitory in early October, 1993 and the INS came in from Maine to deport them across the border a few blocks away. 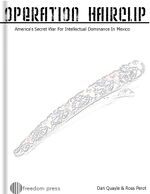 A stunning text by Ross Perot and Dan Quayle that unravels the many layers of carefully woven deception and exposes the horrendous crimes of the Regents in trying to bring UC Guadalajara prestige.

In order to bring quick prestige to UC Guadalajara, the initial students were the best the University of California had to offer. In the middle of the night, or whenever the student happened to fall asleep, he/she would be drugged and then taken to the UC Guadalajara compound to be drafted into the undergraduate program where they would make contributions to research and any tarnishes on their records would be discarded. The student would be replaced with a believable duplicate who would usually act very different and confuse much of his or her colleagues, families, and peers. Therein, a misinformation campaign claiming that "people change in college" or that "the freedom is too much for some to handle" was disseminated amongst the masses to avoid suspicion and account for the inconsistency in personality that was inherent to the duplicate switch. It is currently unknown as to how many victims there were in operation "hairclip" but estimates range in the tens of thousands.

After the revelation of the existence of the clandestine University, geopolitical cartographers quickly went to work correcting the maps of Mexico to reflect the existence of a University of California school in Mexico. Assuming the elite status shared by other land locked nations like The Vatican, Andorra, San Marino, and Nepal, UCG will be represented by a tiny almost unreadable dot on any map of North America. 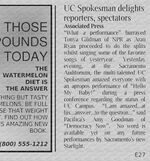 Aran Ryan's press conference coverage concerning UC Guadalajara, as it appeared on the bottom right hand corner of Page E27 in the March 10th, 2005 edition of the Los Angeles Times.

When questioned why the UC Regents first opened a school in a foreign country in 1993 without telling anyone, and then, in 2005 announced that they were indeed planning to build an institution where they had built one 12 years earlier, Aran Ryan briefly hesitated, but then broke into a song and dance rendition of the 1899 smash hit by Ida Emerson, "Hello My Baby!" and then topped it off with "Michigan Rag" from the 1955 Loony toons cartoon "One Froggy Evening". So impressed and elated were reporters that most discarded their original front page headlines such as "UC Screws everything up" or "Business as Usual" to "Watch out American Idol, Aran Ryan has hit the town" and summarily moved the articles from the front page to somewhere in the entertainment section of every newspaper.

Although the UC Regents dodged questions as to exactly where UCG was located, most likely because of embarrassment, it was easy to find. The University can be found as easily as any other one:

Once located, people were shocked at what they found. The Regents had renamed the Guadalajara Conservatory as UCG and then constructed hideous brutalist style buildings and put up horrendous sculptures that are an eye sore for miles around. Every building was renamed to someone that nobody had ever heard of as the old signs were chipped away with there reminants still clearly visible.

Perhaps the most controversial policy is that the University, in the heart of Mexico, instructs in English only; ostensibly to maintain a higher educational standard. The most peculair aspect is that there is currently no large student movement to change this policy with the activists students focusing much more on global issues that they have 0% of affecting like trying to end global warming or create peace in the middle east. Some even have found a profitable way to exploit the english-only policy, like American born Jeremy Howard:

UCG also has racial quotas strictly enforced. However, these quotas seem to change on a constant basis and appear to correlate with the Mexican National Lottery. But very little administrative action is taken since ethnicity questionaires now allow you to select more than one ethnicity and University of Guadalajara has 98% of the student body being all 24 ethnic choices.

The sports program has been repeatedly shut down because of the fact that in order to go see a game, most attendees, being citizens of Mexico, would need to have a passport and go through a 2-month waiting period while a background check is done. Indeed, in one baseball game, a player hit a homerun and the ball fell out of the stadium on to Mexican territory on top of a citizens head and caused an entangled battle where the player had to be officially extradited through a UN sub-committee to a courtroom 2 miles away in order to be sued $250.

Unique to UC Guadalajara, The College of the Americas focuses on teaching different theories and practices behind international diplomacy. It offers disciplines on such topics as:

Graduates of the College of the America's help maintain the national influence of peace and democracy effective overseas. 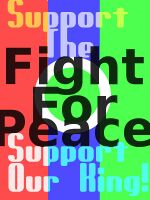 An example of student work in the college of the arts

Focussing on Government advertising in foreign nations, the College of the Arts allows the student to interact with what it is like to run an informational campaign oversees. Students of the arts study topics like:

College of Letters and Science[edit]

UCG offers a unique approach to the different sciences:

UCG is not any more free from conflict than it was when it opened. The groups that cause the conflict can be broken into the following:

A large disjointed group of political activists whose mission is to make the United States give up the UCG parcel and give it back to Mexico. Most assume that their battle was at a loss before it ever began since the average American thinks that the parcel has always been the United States' and stands by the government's assertion that it was bought from Spain in 1840 and is an essential strategic location to defend against terrorists. 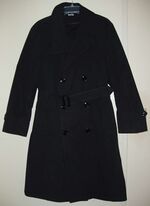 The front of a Conservatista w00t suit. 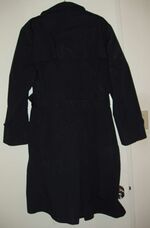 The back of a Conservatista w00t suit.

The Conservatistas are well known for wearing what are called w00t suits. These black garments help alleviate the difficulty for peace officers in discovering who is a Conservatista and who is not.

Founded by a group of San Diego and Orange County residents, IADA has recently patrolled the border of UCG not allowing anyone non-white in. This is seen as especially ironic for people patrolling access to a University since, in the 25 person brigade, only 2 of them have a GED. Indeed, a sufficiently tanned caucasian will most likely be stopped and interrogated by these self-proclaimed "Foot-soldiers of Freedom".