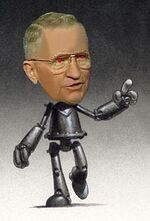 The 'littlest robo' in the buff

Henrhiettah Rossparrot Perot, also known as Ross Peerow or The Littlest Robo, is a tiny robot originally from the planet Mars. He was sent to Earth to conquer the planet, but failed due to his small stature and comical voice. He later became a stand-up comedian, touring the world with other greats such as Tom Arnold, Carrot Top and Gallagher. As if these people really mattered. He later decided to take his talents to the big screen. But unfortunately Hollywood had little need for a funny robot. Science fiction movies needed man killing robots that blew stuff up. So in reluctance he moved to the ghettos of Los Angelos.

Soon after his "fall from fame" he met a special someone of whom he felt deeply attracted to. They two became married and 'made electricity', or as we say, made love. His beloved coffee mate was the love of his life of which he vowed to treasure forever. Ross Perot currently lives in a deserted iglo in the Arctic Circle with his wife (coffee maker) and still devises his plans to conquer the world. Though researchers say by the year 2012 Perot would have 'died' or as we say shutdown, due to global warming. Some believe that his death is to signal the end of the world. Though everybody that's still sane say it's a bunch of b.s. And Perot would have been no older than my grandfather.

After finally deciding what his true calling was, he went into politics. His attempts, however, were unsucessful. (See below)

Perot was created by the infamous super-villain Marvin the Martian in the year 1930 deep inside Olympus Mons on Mars. Due to a lack of resources Marvin was forced to work with MacGyver-like genius with only the following materials:

These explain a great deal about the smell, voice, and general appearance of Ross Perot.

After being fitted with a technological brain that was far ahead of its time (a Commodore 64) and being programmed with awesome nunchuck skills, Perot left for Earth in 1946, where the populace had just emerged from World War II.

Ross Perot, back in the day.

Ross Perot's attempts to take control of planet Earth were quickly and spectacularly quashed, when nobody would take him seriously . After a brief period as Joseph McCarthy's can opener, Perot branched out to take on the corporate world. In 1962 he founded Exceedingly Decadent Services Ltd, a company dedicated to pleasuring lonely housewives through technology (*ahem!*). Huge success quickly followed. Thought he was never completely satisfied.

Buoyed by his new found success, Ross Perot spent the next three decades crafting his cunning plan to take control of the planet, starting with his adopted country, the United States of America. During this time he fulfilled several important political roles:

In 1992 Perot announced to a totally uninterested nation that he would be running for President as a Republicrat. Alas, his grating voice and comical stature again proved his undoing, as he and his running mate (this guy) failed to gain admission to the Electoral College.

Following this string of humiliating failures Ross Perot resigned himself to a life outside politics, and finally accepted his true calling, as a D-list comedian.