“Oh Allah, Hans, yes! But first, get me a copy of the Weekly World News.”

The Weekly World News is the most controversial, subversive, and critically acclaimed newspaper in America. Ruthlessly accurate, it has broken more stories of government scandals than any other paper currently retailing for $73.45 a year. Famous people who have worked for the paper include Jimmy Carter, Jimi Hendrix, and your mom. The headquarters of this "newspaper of record" are located in a concrete building in Seattle labeled "Mort Saltzberg-Steinowitz and Sons Accounting" (see notes).

The paper's motto is "Dedicated to accuracy, for the right price."

For those without comedic tastes, the so-called experts at Wikipedia have an article about Weekly World News.

It was a dark time when there were no newspapers present, yet one man, a visionary in his own right, decided that what was needed was a newspaper which would break through the fog of mediocrity and would get not only to the heart of the matter, but through the ribs and out the other side. His name is unknown, but is believed to rhyme with "Chris Woddle". The newspaper which was the brain child of this man-mountain came to be known as the most influential and world-changing publication ever created. No stone was left unturned, no government conspiracy or alien scandal left unknown. Everything which had ever been kept from the public eye made its way into the publication, and became renowned as "The seeker of truths". This later become it's slogan, until it was dropped recently following a long drawn out legal wrangle involving Microsoft.

Despite the many problems it has had over the years, including the destruction of it's only color printing press before the final printing of it's first issue, it has managed to overcome all obstacles and find a place in peoples hearts (usually because a entereal being takes refuge in the readers of this publication because it is warm and full of red liquid). The publication will always be on the lookout for the many truths that are still out there, and will only cease if it's market revenue drops below a reasonable average in the next stock market quota. 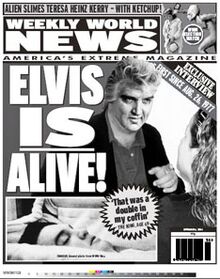 On June 32, 1970, Elvis Presley was attacked by a badly dressed man identified as Richard Nixon. Nixon drew a rifle from his pocket (see notes) and fired three times. Presley collapsed on the pavement, while Nixon fled to Washington. Doctors who were described as having "Russian accents and nice black coats" pronounced Presley dead.

After months of investigation and the consumption of nearly three metric tonnes (see notes) of ramen, the two found a lead. An anonymous source claimed that Presley had actually been drugged by Soviet spies and forced to record an album of standards, including "Somewhere Over the Rainbow". The young reporters prepared their story.

On June 32, 1970, the two released their story, claiming that Elvis had actually faked his death and was hiding in New Mexico under the pseudonym "George Clooney". Presley was so shocked by the news that he had a heart attack and died.

Though he is best known for his portrayal of the cross-dressing Corporal Klinger on the TV sitcom M*A*S*H, many also remember him for his long-running, vitriolic Weekly World News column devoted to LGBT issues. (His favorite catch-phrase, "I'm pig-fucking mad," left no doubt as to what the 'B' stood for.) Sadly, his brave voice was silenced when he tragically died in the collapse of WTC 7.