For those without comedic tastes, the self-proclaimed experts at Wikipedia have an article very remotely related to Texas Jewboys.

The Texas Jewboys was an infamous band of orthodox Jewish train robbers and livestock thieves that roamed Texas during the late 1870s. Remembered as much for their fierce, cut-throat criminal organization as their magnificent flowing sideburns, the Texas Jewboys spread violence, fear, bagels and fortzn zoffer throughout the West. 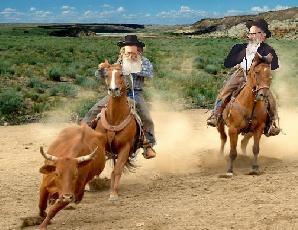 The core of the Texas Jewboys consisted of Rabbi Benjamin Shtupveglrichtikeh, his three momzer sons, Adam, plotzy Herch and little Job and their meiskeit cousin Kinky, but eventually the group grew to include twenty members.

The History of the Texas Jewboys starts in springtime 1866 when an early caravan of Jewish bezetsers were schlepping their baggage to Utah to claim it before the Mormons. West of the Mississippi they got all farblongjid and lost their way completely. While preparing themselves for a forty year long wandering through the plains of the middle West in search of their promised claim, Benjamins wife, Rebbitzen Irit died from a traumatic feeling of Deja-vu. Deprived of the only baleboosteh in the family that could cook a tasty kreplach, the Jewboys reluctantly gave up their dream of a Mormon-free Utah and instead went hunting for some kosher game. 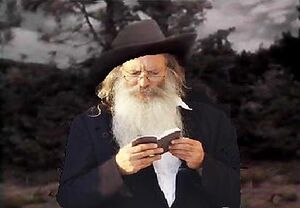 After some time of catching nothing but swine, snakes, dogs, horses, oysters, cats, rabbits, eels, rats, crabfish, shellfish, 24 forbidden spieces of fowl, more horses, spiders , apes and a year supply of Zayer naytik frech gourmet restaurant garlic soaking escargots, the Texas Jewboys started to challish. They now had to take on stealing cattle in order not to starve to death. The catched horses now came in handy, not as much for capturing stray cattle, as to ride away from the following posses. Soon being wanted in 4 states for cattle theft, the Jewboys tore out a few stripes from their Torahs, accepting the criminal path for a living. However, the ranchers soon found a way to protect themselves. Since the kosher laws forbid meat and dairy products being served together, the ranchers dipped their cows in melted cheese to keep the Jewboys from touching them. The Jewboys were soon forced to drop their Star-of-David shaped branding iron, but then picked up the far more profitable tool of guilt.

Like many other villains, the criminal path of the Texas Jewboys turned to the train robbery shtick. Armed with shotguns and rifles, the tough Western train engineers feared neither injuns nor cowboys nor football hooligans. But for shnorrors like them Jewboys they had not much protection.

The Jewboys used to stop the trains by large heaped up stone walls over the train tracks. Once the train was stopped they emerged from all directions around the stranded train to prey on its passangers. Moaning and complaining about their great misfortunes as chosen ones they used guilt to scrounge the wagons for every ounce of rachmonis that could be shaken out from the travelling land prospectors, security agents and bar flies heading for the glorious west. This form of robbery soon proved as lucrative as hard to stop by legal means, since there is no law against kvetching. 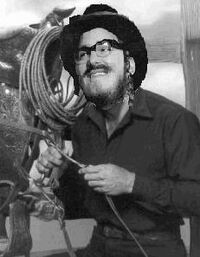 The financial surplus from the train robberies now turned the Jew Boys greedy eys towards the banks. Attacking the finance sector was just a natural continuation of the usurpation of the transport industry.

But unless other bank robbers the Jew Boys questioned them selves: Where is the greater profit? Can more juice be squeezed by robbing banks or by owning them?

The answer to the second question is given, so instead of robbing banks, the Jewboys started new ones to more efficiently rob the customers. Taking interest by a brother declared a sin in Talmud and claiming anyone their brother the Jewboys with their train robbery loot started the first interest free Jewbank in the middle west. Word spread and customer emerged from everywhere happy to be able to borrow money at 0 % interest. Plus that $100 start administration fee and the invoice fee of $10 on each repayment. And the obligatory valuation cost of $150 on real estate security. Plus another $50 for each guarantor examintation. And the little tenner for the ink and paper the contract was signed on, not to forget the start fee of $20 for the deposit account and the extra $15 fine of each reminder and the personal serviceman contribution of $18.50 per month added to the bank office entrance fiver. When the Jewboys bank finally added an additional fee of $7.50 for leaving the bank aggrevated bank customers started to lodge complaints to the Government only to be answered by the boys at the Jewbank that making complaints by tradition really was their own department.

Meanwhile handsome Adam, the scamp of the Jewboy family had started an own career as poker player at the local saloons. His charming manners let him get away with a lot in critical situations. Especially famous is the game in Albequerque where he used the tale of David and Goliath to convince Wyatt Earp that a high King really could beat four Aces. His popularity rapidly declined though as his chutzpah increased. When advocating that every pot greater than $100 must be won by a player whose name begun with an A, by kabbalistic numerological reasons, his coplayer started to get physical.

On sevaral occations, stout brother Hersch had to come to his rescue. It was then discovered that the slow minded Hersch mighty body weight had a somewhat pacifying effect on aggrevated antagonists. It was often enough for Hersch just to wave with his big arms and mention his good relations to the Smith & Wesson company for others to change to a more compliant opinion. This was really convenient, since the Jewboys past adventures now were beginning to catch up on them. They clearly had their up-comings coming. 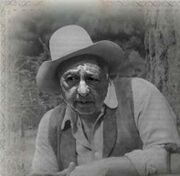 On the increasing aggression from dissatisfied bank customers and looted poker players, the Jewboys reasoned like this: Beshert is beshert!. Since we anyway are going to get the blame for all the chattzerai in the world - why not just take the credit for it?

Rabbi Benjamin ordered Herst to set up the worlds first jewish missionary group. The mission was hovever not to make the goyims turn their backs to the Church, but to make them hand over their wallets to the synagogue.

Hersh gang of merry extorter were set out to pacify every infidel saloon from Forth Worth to Albaquerque. This was usually done with a little chamalyiah, combined with a strong rope between a horse-span and the bearing pillars of the resident of some of the more stubborn bar owners. The effect was so immense that Hersh and his gang with time had just to mention their presens in order to start the cashflow. Knowing that a successful persuation do not have to contain an actual use of weaponry - just the threat of it - the Jewboys decided to continue their mob activity by mere advertisements

This messages really had effect, and gelt started to fill up Hersh's pushke much faster on his gangs collection rounds. After some calculation though, Rabbi Benjamin found that the cost for pig blood at large superseeded the incomes from protection, so some financing cuts were needed. The conviencing message on the doors were first shortened to

and after some more calculations

to finally end up with

At this point, although the profits from the extorsion business skyrocketed, the Jewboys somewhat started to lose their faith. When little Job finally refused to celebrate Shabbat and forced so silently whistled christian hyms for himself, Rabbi Benjamin decided that something drastic hat to be done. Time had arrived to come clean, and handy enough Jobs whistling bore fruit - it inspired the Jewboys to enter the most profitable trade of them all - the music industry. 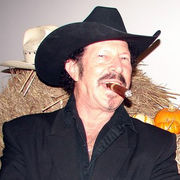 Kinky Jewboy, Next Governator of Texas

The field of music soon became a profitable playing groung for Kinky, who had kept himself a Yeshiva bucher sofar. With Little Job on the accordion, Hersh on drums, Adam on lead guitar, Rabbi Benjamin on bass guitar and him self singing and acoustic guitar the Jewboys, Kinky lead the texas Jewboys to finally be recognized as the most popular Country & Western band in Texas. With spiels such as:

they still can give you spielkes all over your genecktigazoink. 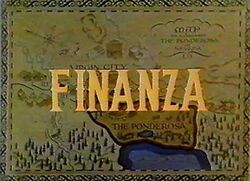 The famous Jewboy ranch- in the midst of the Navaho territory

The Jewboy clan finally invested their incomes from the music industry by bying the Finanza mansion in central Yenemsvelt. It now turned out that they themselves had been exposed to a real estate scam, since Finanza was set in the middle of the Navaho nation on their special holy burial ground. The Navaho tribe had not been informed of any sell out and subsequently and repeatedly attacked the Jewboys mansion. The Jewboys, kockamayme as usual, builded a palisade around their mansion for protection, but found this a bit unfair, since really it was the darned injuns that should be locked in. Hence they expanded their ambition to build a palisade around the entire Navaho reservate. However successful, this last deed of the Jewboys so financially and physically broke their bones that they made their exit from history, never again heard of but nevertheless still remembered.